Tracy Morgan said he was feeling the vibe. 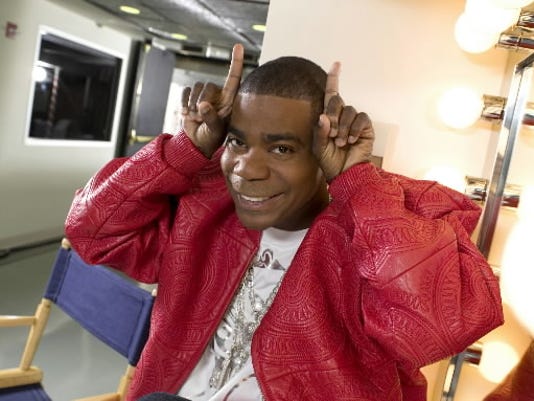 Tracy Morgan said he was feeling the vibe.

It didn't matter that he was doing some Friday afternoon shopping in Los Angeles. Or that he probably had another phone interview scheduled to start five minutes ago.

He broke into an impromptu ballad - stretching for but not quite hitting the high notes. He said it was good to hear laughter on the other end of the line. That, after all, was his goal.

Most comedians crave affirmation. Morgan also craves connection - the expressions, exchange and nuance of conversation. He needs face-to-face or voice-to-voice contact. For him, social media doesn't cut it.

"I'm totally not about that," Morgan said. "I think you lose when you're texting and you're emailing."

It would be hard to convey what's in his head and heart - both of which are occupied with his baby daughter, Maven, right now..

"I've got a lot of love and will do whatever it takes," he said about raising his only girl. (Morgan has three older sons.) "Anything in life is a challenge. I'm willing to accept that."

When Morgan was a child, he honed his craft in his head - making characters and riffing on what he observed. He named his first character Biscuit.

"He was a little boy that had a chip on his shoulder because his dad (wasn't around)," Morgan said. He spoke of the long-retired character fondly. But the sentiment likely carries some bitterness.

Morgan grew up poor in the Bedford-Stuyvesant (Bed-Stuy) neighborhood in Brooklyn. His father, a Vietnam War veteran, struggled with drug addiction and was in and out of Morgan's life. But Morgan wasn't swallowed by the rough environment - he escaped. He marveled at "Godzilla" and horror movies. He exercised his imagination.

When he started to share what was swirling in his head, people reacted. They connected.

He became a regular at comedy clubs and, in the 1990s, landed a recurring part on the sitcom "Martin."

He said his comedy is deeply personal and often contains elements of truth. That along with his unpredictable antics tend to catch people - most of whom are used to structure and routine- off guard. What likely started as a defense mechanism has made Morgan a star and has sometimes landed him in trouble.

Sharing something you create always comes with risk, Morgan said. That's why he said impressions are a piece of cake. Anyone can do them if they practice, he added.

He tends to rely on real-life anecdotes - instead of characters and impressions - during his stand-up shows. And after 22 years as a performer, he never gets nervous. He's prepared, thanks to a team of writers and his crew on the road.

On Saturday, fans can connect with Morgan at York's Strand-Capitol Performing Arts Center. He also has a new comedy special in the works.

"I'm not going to say it over the phone," Morgan said of topics that he might mention. It's a surprise, of course, he added.

And it probably wouldn't be funny online or in print anyway.

Meet more celebrities who have visited the region

This is a rental performance, so some Strand box office policies might not apply.

There will be a VIP meet and greet with Morgan 10 a.m. Saturday at the Strand. A limited number of tickets are available for $200 and include a meet and greet and photos with Morgan, an autographed photo, tour shirt, poster and comedy DVD. Attendees must purchase a ticket to the show to attend the meet and greet. For details, call 717-846-1111 or visit mystrandcapitol.org.