When Of Mice & Men step onto the stage at the Giant Center on Tuesday, Jan. 27, as they prepare for the release of... 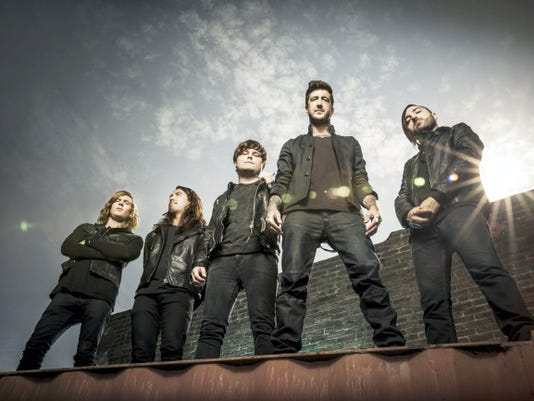 Of Mice & Men will open for Rise Against and Linkin Park at the Giant Center in Hershey on Tuesday, Jan. 27. Photo courtesy Travis Shinn(Photo: )

When Of Mice & Men step onto the stage at the Giant Center on Tuesday, Jan. 27, as they prepare for the release of their new album "Restoring Force: Full Circle" on February 24, they know that they are the young guys.

Touring with Linkin Park and Rise Against, who have a combined 30 years in the industry can be a daunting task for a band that has been around since 2009, but they don't show it.

Perhaps it's the fact that Of Mice & Men already went on tour before with Linkin Park, as the two bands traveled together on an UK/European tour.

"What is it like touring with Linkin Park? Wow, super awesome. It's great. It's the most fun ever. We have a coffee meeting and there's a yoga room," said the band's lead singer Austin Carlile with a laugh. "We were going out and playing in Germany and even played 12 shows in Germany on our last tour, and every night, just thousands of people singing and screaming, and it's unbelievable to me. It's something that we want to set our sights to do as a band. And we see Linkin Park as a band like ourselves."

Carlile said that the work ethic they have is somewhat inspired by what they saw Linkin Park do on the tour, as well.

"We get to the venues at, you know, 9:00 or 10:00 a.m. every morning and we wake up, walk in, half dressed, half asleep, for a tired day at the studio, or at the venue, that Linkin Park comes in. You know, they're not there for sound check, a few hours before they play the show; they're rock stars," Carlile said. "They come in and go, 'Oh, we want to do that.' We want to be able to come in and we want to get to a point where we can not have to set up the venue for literally 13 hours all day wondering what we're going to do, trying to figure out what to do in the middle of nowhere. And it inspires us, and it makes us want to work harder and it makes us want to work and create and become artists that can support themselves, like Linkin Park does."

The hard work didn't go unnoticed by Linkin Park front man Chester Bennington, either, as he sang the praises of Of Mice & Men.

"You know, it's interesting because in the same way, touring with Of Mice & Men, it's inspiring to me because here are these guys, like you said, they're at the venue 13 hours a day, you know? They're trying to figure out how to wash their clothes, to figure out what to do," Bennington said. "They're around each other all the time. They also have lots of decisions to make. You know, these guys play something like (expletive) eight shows in a row, and I was like, 'Dude, you're going to destroy yourselves.'

"And you've got to think long term. And these are the things that, like, you know, I look and I go, 'Wow! These guys actually are like really prepared to play eight shows in a row.' Like, that is bad ass. I don't care who the (expletive) you are. That's insane, and especially the shows these guys do."

And that passion makes them the perfect fit for "The Hunting Party Tour," which kicked off January 15 in Orlando, Fl. It's bands like that, which display the hunger and "want" that Linkin Park loves to share the stage with.

"It's inspiring. It's fun to be around a young band that loves playing music and will do anything, literally anything to do it and show up every day with a smile on their face and go out every night and crush it and come up and play songs with us when they should be, like, not playing music anymore; like, resting or whatever else they want to do," Bennington said of Of Mice & Men. "It's fun, you know? It's fun to be around guys that are so hungry, because it makes me want it I want our crowd to love these guys so that they go play arenas. I want these guys to go play arenas; I want them to play stadiums; I want them to have the same success that we have, because it's fun to watch them play.

"It's fun to see somebody want it so bad. And it's inspiring to me, you know? And it makes me go, 'That's what I do this for.' I love seeing bands that make me want to be in a band, you know?"

And like Linkin Park has done over the years, Carlile and his band, comprised of Alan Ashby, Valentino Arteaga, Aaron Pauley and Phil Manansala, have changed up their sound as the years go on.

"Just like Chester was saying, with each of his albums, he feels like he's in a different band and feels like their songs change. That's what we do as a band and, you know, I think we're constantly evolving our sound and constantly evolving who we are as a band and who we want to be as a band, because at the end of the day, you know, I don't think with any kind of music you never really know, because it's always changing and you're always creating as a musician," Carlile said. "And just the fact to be able to take notes and to be on tour with a bunch of really awesome guys; it's a blessing and it's a great experience. It's something I'll definitely never forget."