"A New Hope" and "The Empire Strikes Back" have the least amount of lightsaber time - and the best reviews.

Luke Skywalker (Mark Hamill) in action in 1983's 'Star Wars: Return of the Jedi.' The film has about 7 minutes of lightsaber screen time.(Photo: Lucasfilm)

The lightsaber is the weapon of choice for Jedi Knights, and their appearance in the "Star Wars" films is often a highlight for fans.

We counted how often ignited lightsabers show up in the “Star Wars” films, compared their Rotten Tomatoes scores and looked at how those elegant weapons for a more civilized age were used in each film. The latest chapter in the franchise, "Star Wars: The Force Awakens," which opens Dec. 18 but will be shown in some theaters Dec. 17.

First time we see a lightsaber: Shortly before the 34-minute mark, Obi-Wan Kenobi hands Luke Skywalker a lightsaber that belonged to Luke’s father.

Obi-Wan calls it "an elegant weapon for a more civilized” time. “For over a thousand generations, the Jedi knights were the guardians of peace and justice in the Old Republic -- before the dark times, before the Empire.”

Obi-Wan drops a good bit of exposition in the scene, but it works because there is some mystery around those old times. Plus, Luke and the audience both think the lightsaber is cool.

Notable lightsaber duels/battles: Obi-Wan vs. Darth Vader. The old Jedi and his former student appear to rely on strength, footwork and technique -- not agility or acrobatics. Obi-Wan manages to pull off one spin move.

Notable body parts cut off by a lightsaber: Two fugitives pick a fight with Luke in the Mos Eisley Cantina. One of them pulls out a blaster gun. Obi-Wan chops off his arm.

Ratings: 94 percent positive reviews from critics and 96 percent of the audience liked it.

First time we see a lightsaber: Luke gets captured by a snow beast. Shortly before the 10-minute mark, he uses the Force to move his lightsaber through the air, cut his feet free from ice and chop off one of the beast’s arms.

Total lightsaber time in film: About 5 minutes -- pretty much the same as in “A New Hope.” But lightsabers are used in “Empire” with more action, such as during the invasion of the Rebel Alliance base, when Luke uses his lightsaber so he can throw a bomb inside an Imperial walker.

Notable lightsaber duels/battles: During his Jedi training on the swamp planet Dagobah, Luke duels with a version of Vader, although with Luke’s own face underneath the mask.

“The Force is with you, young Skywalker.  But you are not a Jedi yet," Vader says.

The fight has multiple rounds.

It starts with Vader seeming to not see Luke as a serious threat. Vader holds his lightsaber with one hand and comments about Luke’s training.

But as the duel goes on, Vader holds his lightsaber with both hands, uses the Force to hurl objects at Luke and attacks quickly. The young Skywalker gets a good shot on Vader’s shoulder, before Vader chops off his right hand and says he's Luke's father.

Notable body parts cut off by a lightsaber: The snow beast’s arm and Luke’s right hand

Ratings: 94 percent positive reviews from critics and 97 percent of the audience liked it.

First time we see a lightsaber: Luke Skywalker begins the film looking like a true Jedi -- able to do mind tricks and Force chokes. He urges the gangster Jabba the Hutt to bargain with him for Han Solo’s freedom.

Shortly before the 33-minute mark, Luke uses his new green lightsaber to free himself and others from Jabba and he leads a big desert battle.

Lightsaber time as a percentage of the entire film: About 5 percent

Notable lightsaber duels/battles: After much taunting and goading by the Emperor, Luke takes his lightsaber, ignites it and tries to kill the Emperor. Vader blocks him. They duel for a while, although young Skywalker stops multiple times, saying he doesn’t want to fight his father.

Notable body parts cut off by a lightsaber: Luke defeats Vader in a duel and chops off one of his father’s robotic hands. This prompts Luke to look at his own robotic hand and give up fighting.

Ratings: 79 percent positive reviews from critics and 95 percent of the audience liked it.

Ewan McGregor and Liam Neeson in a scene from 'The Phantom Menace.' The film features the earliest appearance of lightsabers. (Photo: Lucasfilm, Ltd.)

First time we see a lightsaber: “The Phantom Menace” has the earliest appearance of an ignited lightsaber.

A little after the 5-minute mark, Obi-Wan and Qui-Gon Jinn draw their lightsabers in response to an explosion. They deactivate them after they see poisonous gas enter the room.

Less than 30 seconds later, they and their lightsabers emerge from the smoky gas to destroy a bunch of droids.

Lightsaber time as a percentage of the entire film: About 6 percent

Near the end, Qui-Gon and Obi-Wan fight Darth Maul, who uses a double-bladed lightsaber.

The fight features acrobatics, gravity-defying moves and no real dialogue between the opposite sides. (Obi-Wan yells “No!” after Qui-Gon gets stabbed, but that’s more of a general reaction, not something he’s saying directly to Darth Maul.) They just fight, which is rare for the “Star Wars” lightsaber duels.

Notable body parts cut off by a lightsaber: Obi-Wan leaps over Darth Maul and cuts the Sith apprentice in half.

Ratings: 56 percent positive reviews from critics and 60 percent of the audience liked it.

First time we see a lightsaber: After the 14-minute mark, Obi-Wan and Anakin run into Padme’s room to protect her from poisonous bug-like creatures. Anakin cuts them apart with his lightsaber. It’s a quick use of the weapon -- less than 10 seconds.

Lightsaber time as a percentage of the entire film: About 10 percent

Notable lightsaber duels/battles: The first hour and 35 minutes is relatively light on lightsaber screen time -- Anakin and Obi-Wan both try to use lightsabers in separate fights with bounty hunters, only to lose hold of them. But the lightsaber use increases a little, and at about the one hour, 50-minute mark, a big battle with Jedis, droids, beasts and one purple lightsaber begins. Clones show up to rescue the Jedis.

Near the end, Obi-Wan, Anakin and Yoda each take a turn dueling Count Dooku. Yoda jumps and spins around a lot. But Dooku escapes.

Notable body parts cut off by a lightsaber: Obi-Wan chops off an assassin’s arm. Anakin chops off heads of Tusken Raiders. Mace Windu cuts off bounty hunter Jango Fett’s head. Obi-Wan cuts off limbs of a giant beast. Near the end, Count Dooku chops off part of Anakin’s right arm.

Ratings: 65 percent positive reviews from critics and 59 percent of the audience like it. 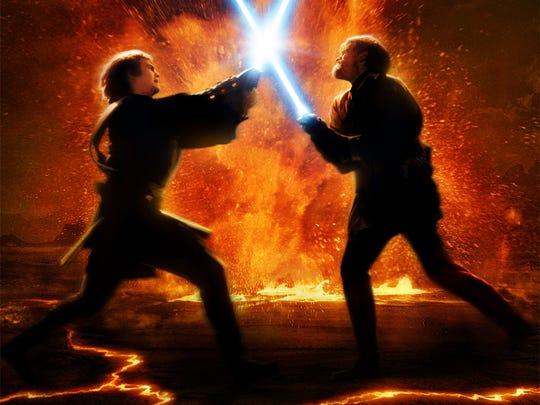 Hayden Christensen as Anakin Skywalker, and Ewan McGregor as Obi-Wan Kenobi in 'Revenge of the Sith.' The 2005 movie has the most lightsaber screen time of all the 'Star Wars' films. (Photo: Lucasfilm Ltd.)

First time we see a lightsaber: In the seventh minute of the film, Obi-Wan jumps out of a ship and destroys some droids. Anakin joins him.

Lightsaber time as a percentage of the entire film: About 15 percent.

Notable lightsaber duels/battles: There are so many. Anakin and Obi-Wan vs. Count Dooku; Obi-Wan vs. General Grievous; Mace Windu and some quickly killed Jedis vs. Palpatine; Yoda vs. Palpatine; Obi-Wan vs. Anakin, which features many more spins than when the teacher and former student squared off in “A New Hope.”

Notable body parts cut off by a lightsaber: So many people lose limbs in this film.

Anakin cuts off Count Dooku’s hands then his head. Obi-Wan cuts off some of General Grievous’ lightsaber-wielding limbs. Anakin cuts off part of Mace Windu’s arm, siding with Mace Windu and making his turn to the Dark Side. Yoda chops off the heads of two clones that betray him.

Near the end, Anakin jumps over Obi-Wan -- kind of similar to what Obi-Wan tried on Darth Maul in “The Phantom Menace.” But this time, Obi-Wan chops off most of Anakin’s legs and an arm.

Ratings: 79 percent positive reviews from critics and 65 percent of the audience liked it.

What we counted: We included moments where you can see or hear an ignited lightsaber on screen, or when it seems that characters on screen are probably paying attention to a lightsaber.

For instance, in “Return of the Jedi,” we counted most of the big battle in the desert, because Luke is jumping around causing damage and chaos with his lightsaber.

But we didn’t count the parts where Leia chokes Jabba or Han Solo shoots Lando Calrissian free. In those cases, the characters seemed focused  on other things.

We tried to bring that approach to all the scenes.

What we didn’t count: When you see just the lightsaber handle.

About the film’s ratings: They are based on Rotten Tomatoes scores.

About the versions: We used Blu-ray discs of the films, which include changes from the theatrical releases.