Women form strong friendships then knock their friends over in the rink. Roller derby comes to York with the York City Derby Dames.

Now take away the balls, add some roller skates and you've got roller derby.

Jamie "Devour" Moore founded the York City Derby Dames three years ago, bringing this full-contact sport on wheels to the white rose city. Like most sports, there's a complicated rule system that you might not understand the first time you go to a roller derby bout. But even if you need to poke the spectator next to you to ask what's going on, you're pretty much guaranteed to have a good time cheering on these rocking ladies.

The rules may be allusive, but the etiquette is pretty simple. Brush up on your roller derby spectating do's and don'ts, then head on out and enjoy the game. Members of the York City Derby Dames pack set up for a jam. Paul Chaplin, For the York Daily Record
Fullscreen

Players with the York City Derby Dames slap hands with fans after the bout. Paul Chaplin, For the York Daily Record
Fullscreen

Food: The concession stand is open during the game so hot dogs, french fries and fountain drinks are all available. There's no alcohol at the rink, but if you join the afterparty is at Waterway Bar and Grill in York you can have a drink with the team.

Food festivals you need to attend in June & July

Ages: Bring the whole family. Kids under 10 are free and you know they'll love telling their friends about it.

Cheering: This isn't golf — hoot and holler for both teams. Be aware though, this is a friendly sport and even during competitive games taunting and heckling aren't tolerated. You don't want to get on the bad side of these women.

Dress code: The derby dames' male announcer dresses in drag and the chances of spotting someone in a fairy costume are pretty high, said Moore — so you don't need to wear your Sunday best. "The derby community is very open minded and we generally don't care," Moore said. The same goes for the players. Some wear standard athletic clothing with their uniform; others spice it up with fishnets or wacky leggings.

Time commitment: The game consists of two 30-minute halfs with a 10-15 minute break between, plus time for the occasional timeout or penalty.

Your ultimate summer guide to outdoor fun in York

Likelihood of blood: Low. It can happen but not very often, Moore said.

Likelihood of players winding up on the floor: High. Seeing three or four players on the floor at a time isn't out of the question. 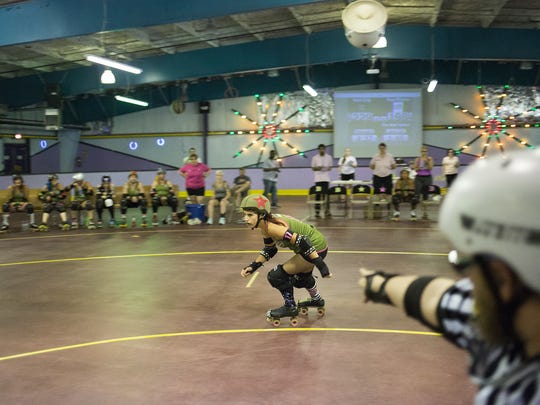 The goal: Score the most points, of course.

The basics: Four blockers and one jammer from each team skate in the same direction on a track. A point is scored when a jammer laps a player from the opposing team. Each team is trying to score and prevent the other team from scoring at the same time.

The helmets: The jammer is identified by a star on her helmet. The pivot, a blocker, wears a stripe on her helmet. If a jammer gets, well, jammed, she can pass the star to the pivot who then becomes the jammer.

The York City Derby Dames' next bout is July 10 against the Black Rose Rollers at Magic Elm Skateland at 625 W. Elm Ave in Hanover. They're back at home July 31 against the Philly Block Party.

Tickets are $10 in advance, $12 at the door. Visit their website yorkcityderbydames.com or find them on Facebook for details. Watch the York City Derby Dames in action at flipsidepa.com.