Chambersburg girl goes back to the 'Renaissance'

When the gates to the Pennsylvania Renaissance Faire open every Saturday and Sunday at 11 a.m., 17-year-old Buntie Collier will be among the crowd of merchants and artisans waiting to greet the visitors that will swarm into the Shire.

Chambersburg girl goes back to the 'Renaissance'

When the gates to the Pennsylvania Renaissance Faire open every Saturday and Sunday at 11 a.m., 17-year-old Buntie Collier will be among the crowd of merchants and artisans waiting to greet the visitors that will swarm into the Shire.

Collier’s day will be filled with singing, dancing and storytelling. She will serve a king and queen their lunches. She will bring water to weary warriors in human chess matches. She will be a spectator at jousts. In the evening, she will attend the grand coronation ceremony, and then at 8:00 p.m., she will join the entire kingdom to bid the visitors farewell.

But when the weekend is over, Buntie Collier will remove her costume and walk out of the gates as 17-year-old Abigail Armstrong, a high school senior. On the hour and a half drive home from Manheim to Chambersburg, her thoughts will shift from the magic of the Faire to her unfinished homework.

Armstrong is one of the hundreds of cast members that make up the 90-plus stage shows, 22 royal kitchens (food vendors) and scores of artisan merchants of the Pennsylvania Renaissance Faire. 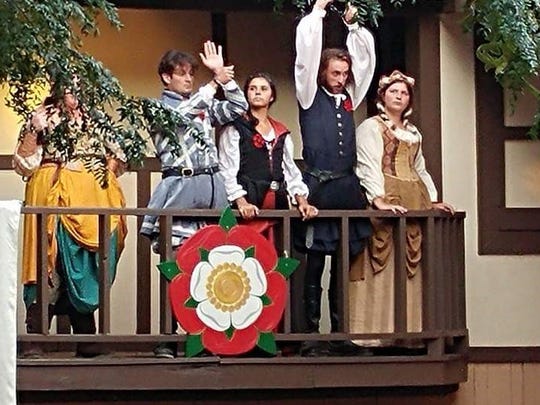 For a young actor like Armstrong, the Faire is a unique performance opportunity as well as a rigorous acting boot camp. The actors are trained in everything from history to dialect to ensure that they remain historically accurate while interacting with attendees.

“It’s a lot of improv training and sometimes we have little workshops like stage combat and other theatre knowledge,” said Armstrong.

Armstrong grew up attending the Faire with her family’s season passes, and this is her third year as an actor. Having grown up with the Faire, she has come to think of the cast as a second family and remains friends with some of the cast members in real life.

Like Armstrong, the character of Buntie has grown and developed over the years.

“She’s very flirtatious this year,” said Armstrong. “They gave us a small description of the character, and we pick things up from there.” 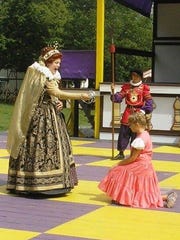 A young Abby Armstrong, right, is knighted by the queen at a past Pennsylvania Renaissance Faire. Armstrong works as an actress at the Faire today. (Photo: Submitted)

Jessy Hamel began working at the Faire 11 years ago as a production intern. Today, she is the director of entertainment and oversees a complete production crew including casting, costuming, set construction, sound, fight choreographers, visual effects and more to put on shows across 9 stages and throughout the streets of the Faire.

She said that the cast is initially divided into two groups that are selected through a series of national and local auditions.

“The Blackfryars are our volunteer cast, and they start rehearsal in April,” she said. “They work incredibly hard Wednesday nights and Saturday nights on their characters, improvisational skills, music and shows until the Bacchanalians arrive in July. The Bacchanalians are our professional acting company. During July, the two casts become one and we bring the Shire of Mount Hope to life!”

Hamel explained that due to the rigors of outdoor theatre, the actors must be prepared to work in all sorts of different weather conditions – including this summer’s heat wave.

“We cast and hire for all kinds of different roles and positions so there really isn’t an ideal candidate,” she said. “Not being afraid to put in the time and get your hands dirty doesn’t hurt, though.”

Abigail Armstrong as Buntie Collier is a member of the Blackfryars cast. 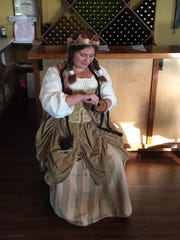 Stacy Armstrong, Abigail’s mother and a vendor at the Renaissance Faire, feels that the benefits of participating in the fair far outweigh any complications from busy schedules and long drives.

“It is a definite commitment,” she said. “Not just for her, but for us as well. But we look at it as an investment in her future.”

She added: “It’s magical. When you walk through the gate, you leave your problems at the gate for the day and just enjoy the magic that goes on.”