MCCONNELLSBURG >> The older brothers of Kayla Davis were not too pleased with the sight of their little sister... 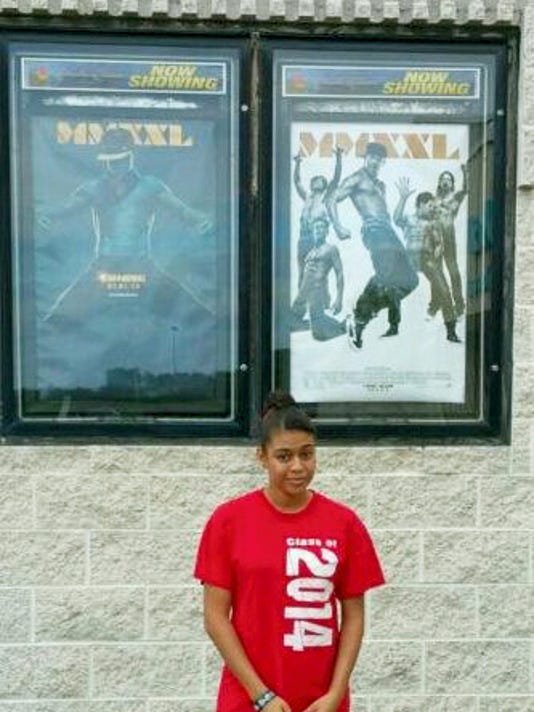 Submitted Kayla Davis stands underneath movie posters of "Magic Mike XXL." Davis played an extra in the movie, making it her film debut.(Photo: )

MCCONNELLSBURG >> The older brothers of Kayla Davis were not too pleased with the sight of their little sister throwing money at strippers in the movie "Magic Mike XXL," but Kayla is quite pleased with her first film experience.

Davis' performance in the 2015 comedy film about a troupe of male strippers was her first on-screen appearance. Her nonspeaking role paved the way for a second film gig in a film targeted for release in December, and Davis hopes the work opens the door for further opportunities.

"Channing Tatum is my favorite actor and I've always thought he was sexy," Davis said. "How many people get to say they met Channing Tatum."

Not to mention throw money in the direction of the former real-life male stripper.

Davis and her mom, Beth Roberts, said Davis' boyfriend and her elder brothers took a dim view of that.

"My brothers weren't happy about the premise of the movie," Davis admitted. "They've always been very much my protectors, even when I've thought they're going too far."

Her brother, Jeremy, said that when he graduated from high school, he went so far as to recruit a younger student to "keep an eye" on his little sis.

Roberts said Jeremy, 25, and Timothy, 27, both grated at the prospect of their sister's role in the movie. Jeremy was won over after seeing the film in a theater.

"Timothy says he'll wait until it comes to video," Roberts said, "but Jeremy became so excited when we saw the movie. He kept pointing at the screen, saying "there she is, there's my sister."

Jeremy said he's "ecstatic" for his little sister in retrospect.

"It wasn't a major role," he said. "She didn't speak, but she was in multiple scenes, probably five minutes altogether."

Mom said Davis' boyfriend may still be feeling the pangs of jealousy.

"He said she (Kayla) was staring wide-eyed at the strippers (in her role)," Roberts said. "We told him it was just good acting, but he didn't take it as that."

Roberts is supportive of her daughter's film support — and a little envious herself.

"I'm very proud of her and I'd like to see her go further, eventually get speaking roles," her mother said. "But, she gets to meet all these big stars, while I get to watch on the big screen."

Following the three-day "Magic Mike XXL" shoot in Savannah, Georgia, Roberts said her daughter was in Pittsburgh a week later filming another small role for a movie scheduled for release this winter.

Details about the film are held in confidence, Robert said, but she admits, "It's based on a true story, and the next guy she gets to work with is an actor who's been popular since the 1980s and who I've been a big fan of for many years."

Davis said she caught the acting bug as a youngster performing in school plays. She graduated from Barbizon School of Modeling and Acting in 2013 and walked the runway in several Washington, D.C. fashion shows, as well as appearing as a live mannequin at the Deb shop in Chambersburg Mall.

The work a movie set was different in a variety of ways, she says, with one the big differences being the attention she got from make-up artists and hairdressers – even as an extra.

"I've never had anyone do my hair and makeup," she said. "Those are things I always did for myself.

"That was exciting. The three days in Savannah were the best days of my life. It helped me realize that this is what I want to try to do."

However, she said an animal rescue remains in her future.

"I've always been one to bring in stray dogs and cats," Davis said. "I feel so bad for animals that are neglected or abused. I still want to have a rescue, but I need to save money for that."