Local chef Genaro Delillo can stand the heat. And, hopefully, the wrath of Chef Gordon Ramsay. 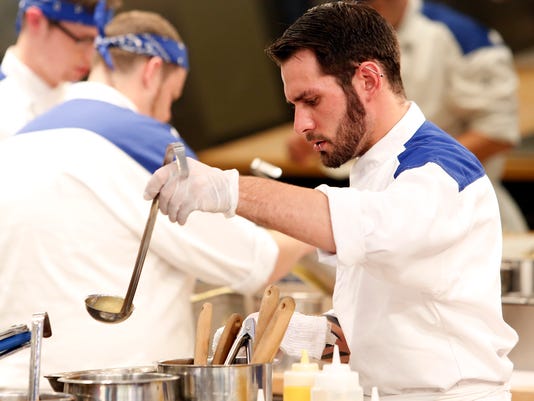 Lebanon's own Chef Genaro Delillo represented the city on season 16 of FOX's "Hell's Kitchen." When not cooking alongside the likes of Gordon Ramsay, Delillo can be found in the kitchen of the Downtown Lounge.(Photo: Greg Gayne, FOX Broadcasting Co.)

Local chef Genaro Delillo can stand the heat. And, hopefully, the wrath of Chef Gordon Ramsay.

Delillo, 29, of Lebanon, was chosen to compete alongside 17 other chefs – including Aziza Young, a line cook at Susquehanna Harvest Seasonal Grill in Harrisburg – on the upcoming season of FOX’s "Hell’s Kitchen."

The show, which features five Pennsylvania contestants this year, premiered on Friday, Sept. 23 at 8 p.m.

Originally from Windsor Castle, Delillo has lived in Lebanon for the past three years, working in the kitchen at Lebanon’s Downtown Lounge.

“If anybody in Lebanon wants a professional chef’s cuisine, come to the Downtown Lounge,” he said.

Delillo’s career started the way many seem to - helping to cook for his large family.

“I started cooking with my mom at home. I’m one of six,” he said.

Delillo cited homemade gnocchi, marinara sauce and spaghetti as dishes made by his mother for large Sunday dinner gatherings.

At the age of 14, he was working at the Virginville Hotel in Virginville, learning the ropes of a restaurant kitchen.

“That’s where I started to learn everything I know today,” said Delillo.

Afterwards, he worked at a number of jobs before settling in Lebanon.

“I kind of bounced between a lot of different restaurants,” said Delillo.

The years of experience have paid off in crafting a unique culinary style for the chef.

“My personal style of cooking I consider Americana,” he said, which he explained as taking regional and ethnic cuisines and “making it palatable” to the area, transforming them for American taste buds.

His journey to "Hell’s Kitchen" was almost incidental, based on a stumbled upon classified.

“Basically one day my wife was on Craigslist and noticed a listing that they were hiring chefs,” said Delillo.

When he called the number, he spoke to a woman who, “asked questions with the same attitude that Chef Ramsay would give.”

Soon after, he went to Manhattan to meet with the casting agency and record a short casting tape for the show. He was then contacted to move on to the next step in California.

“They wanted to fly me out for more auditions,” said Delillo.

The chef said that he was excited, but mostly, “thought it was just a narrowing down process.”

When he received the call that he had been chosen, however, he knew it was game time.

“I was extremely ecstatic,” said Delillo.

He was nearly called for season 15 of the show, but at last minute was moved to season 16. When time came, he boarded a plane and flew to Los Angeles to join the cast and crew.

“It was a little overwhelming at first, but everyone was very nice,” said the chef.

He had positive things to say about his competition, calling his competitors, “very skilled and very talented chefs.”

“We didn’t initially meet everybody until we first got onto the bus,” said Delillo, referencing the iconic opening of each season.

“At first we were kind of sizing each other up,” he said. "Once we settled in, everybody was generally friendly.”

Delillo also noted the ease with which the 18 contestants, sharing one space, cooked their own meals each night.

“Everyone knew how to work around each other in the kitchen,” he said.

Of course, the true star of the show is the fiery Chef Gordon Ramsay, whom Delillo praised.

“Being able to work at the same station as Chef Ramsay was an amazing experience,” said the chef.

Behind the angry, stubborn facade, Ramsay was “genuine” and had “nice things to say,” said Delillo. Also genuine is Ramsay’s culinary skill and knowledge.

“It was actually an honor to be judged by him, whether positive or negative,” said Delillo.

In the end, he was able to expand his own horizons by learning from everyone around him.

“I took home a lot of new skills and new techniques from not only Chef Ramsay, but also the other sous chefs,” said Delillo. "It was worth the whole experience.” 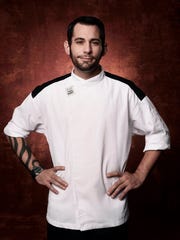 Chef Genaro Delillo, of Lebanon, mans his station in FOX's "Hell's Kitchen." Delillo auditioned for the show and was chosen for Season 16, where he competed among 18 chefs. (Photo: Greg Gayne, FOX Broadcasting Co.)