One of the goals of Lebanon Community Theatre is putting on big summer productions year in and year out.

One of the goals of Lebanon Community Theatre is putting on big summer productions year in and year out. This year is no different, as this summer’s musical features Meredith Wilson’s “The Music Man,” an award-winning Broadway classic of quirky characters with a twisted plot, and of course, “76 Trombones.” But this year’s show also features younger actors and actresses.

“We have a cast of almost 50, so it really encompasses children from as young as seven to people at age 80,” said Director Carol Saltzer, who’s been well-known around the area in that role. “We’ve got a lot of new people, as well as some returning veterans. We’ve got some really good actors, dancers and singers. We’ve also got some little children that can do all kinds of things. One scene you’ll see Marian, the librarian, with our teens, and they do a great dance number that’s very creative. It’s a lot of fun.” “The Music Man” follows fast-talking traveling salesman, Harold Hill, as he cons the people of River City, Iowa, into buying instruments and uniforms for a boys’ band he promises to organize. The only problem is Hill doesn’t know a trombone from a treble clef. He then plans to leave town abruptly with the cash he makes from forming the band, but the plan goes up in smoke when Hill falls from Marian, the librarian, who transforms him into a respectable citizen, and falls in love with him.

The one who plays Harold Hill is Eric Pope, of Myerstown, and his approach to the character is simply as described.

“You try not to model your performance after anyone in particular. It’s always good to make it your own. I think the trick is to portray him as an opportunist, to sort of the con man that he is, but he also has a good heart,” Pope said, who’s been with LCT since 1995, and who is coming off his recent performance in “Seussical” as The Cat in the Hat. “He is able to fall in love. He is able to feel bad about some of the things he may trick people out of in his past. He is a redeemable character.”

And for Ashley Oyster, of Lebanon, portraying Marian is something very familiar, having played the role previously.

“She does change a lot during the show. She is one of the first to spot Harold as the con man and starts to do some research on him and finds out he is a little shady,” Oyster said, who’s in her second year with LCT. “Harold takes an interest in her brother Winthrop, who’s missing his dad, and he really brings him out of his shell and so she really falls for that in Harold that he was able to bring her brother back from his unhappiness.”

When it comes to falling in love on stage, especially dealing with characters as unique as Harold Hill and Marian, chemistry is the key. That isn’t an issue for Pope nor Oyster. 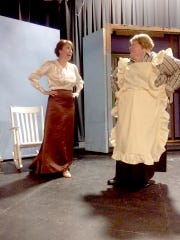 Ashley Oyster plays Marian the Librarian in the Lebanon Community Theatre's production of "The Music Man." Also shown is Cheryl Reiss, who plays Mrs. Paroo. Show dates are Wednesday through Sunday, July 27-31 and August Wednesday, August 3 through Sunday August 7, 2016. Showtimes are 7:30 p.m. for Wednesday through Saturday, and Sunday Matinees are at 2:30 p.m. (Photo: Courtesy of Missie Bates, Lebanon Community Theatre)

“She’s a great performer and has a beautiful voice. It didn’t take really long to get a good relationship with her,” Pope said. “She’s a very friendly person and very outgoing, so it was pretty easy, and I was very happy about that.”

“He’s a great actor, and we have pretty good chemistry on stage,” Oyster said. “We’ve just had a lot of fun tackling everything our characters encounter together.”

And as you watch Marian, Harold Hill and the rest of the cast, all they want is two things.

“We want them to have fun. We want them to be emerged in feeling the love songs and that they love the dance numbers and smile and sing,” Saltzer said. “When they come in, we want to totally entertain them.”

The production began its run Wednesday, July 20, through July 31, then again from August 3 to 7. Show times are 7:30 p.m. for Wednesday through Saturday, and Sunday Matinees are at 2:30 p.m. Tickets are available by calling the box office at 833-4LCT or online at www.lebanoncommunitytheatre.org.