FAYETTEVILLE - Some of the younger actors working at Totem Pole Playhouse this summer, specifically in the current run of “A Funny Thing Happened on the Way to the Forum,” gathered for a lunch break under a tent outside the theater between Chambersburg and Gettysburg.

Of the dancers, Stevens, Andres, Mitchell, and Marinelli already have their Actors Equity cards. Moriarty is still working on hers.

They have impressive backgrounds. One was a former Rockette who toured the country.  Another was a member of the Joffrey Ballet School, studying in Moscow and performing in Italy and across the U.S. Another has worked on the Disney Cruise Line, done videos with Justin Bieber and Mariah Carey, for a few examples.

Lewis Black talks about his play

The Actors Equity Association, or “Equity,” is the labor union that represents some 45,000 actors and stage managers. Founded in 1913, it is a member of the AFL-CIO.

The four young men are not yet members of Equity, but are EMCs, or “Equity Member Candidates” - basically, apprentices.

They are also students at the University of Cincinnati’s Conservatory of Music, the oldest musical theater training program in the country and the first of its kind.

CCM was recently named the top musical theater training program in the country.

Griffin, Kastner, Koumbaros, and Wrobel contracted through the summer season with Totem Pole Playhouse. They are walking Swiss Army knives, meaning that they built sets and work as carpenters, painters and engineers. They also appeared as actors, dancers and singers in “Forever Plaid” (June 17 – July 3), portraying Sparky, Smudge, Jinx and Frankie, members of a 1950s singing group who are killed in an accident on their way to their first big gig. They return from wherever it is dead musicians go to serenade the audience and tell their stories.

While they were in rehearsal for "Plaid" they were also helping to build the set for “One Slight Hitch,” the riotous Lewis Black Comedy (July 8 – July 24). They helped build the set for “A Funny Thing Happened on the Way to the Forum” (July 29 – August 14) while rehearsing their parts as four characters in the production. 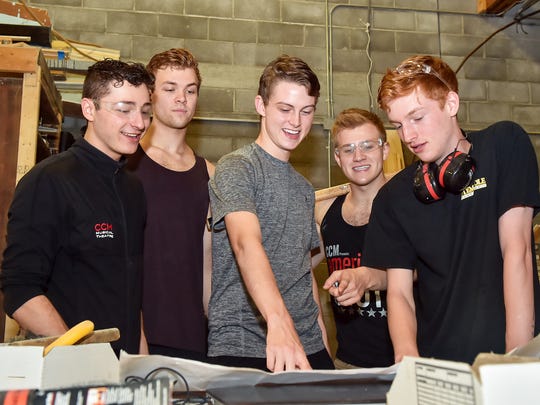 Several of the troupe said that many think what goes on up on that stage is the work of the performers.

That is not quite right.

“That’s what we live for,” said Marinelli, who, like Andrews, has been dancing professionally since before her teens.

The “work” part is studying in college to be there in the first place - around five years, plus additional classes between gigs, not to mention careful management of diet and lots of physical training.

“Going to the gym, watching what I eat, that’s part of my homework,” said Griffin.

There is a lot of disappointment behind the scenes. For women, there are 50 to 75 auditions for every job they land. For men, the rates work out somewhat better.

“You have to have a very strong sense of self-esteem,” said Mitchell. “When you don’t get the role, It’s usually because they were really looking for somebody who has different qualities. You can’t let it get to you.”

Totem Pole is an Equity theater, which means that the professional actors who perform there must be Equity members or EMCs. It is a place, said Griffin, where EMCs come to practice the training they have received, to hone their skills, and to build credit toward Equity membership.

While Mitchell, a former Rockette, is not an Equity member, she is a member of the American Guild of Variety Artists, which allows her to perform at an Equity theater.

Once accepted as a member, Equity members must pay a $1,200 initiation free, and then $60 every two years to maintain their membership in good standing.

Speaking of good standing, it is possible to lose one’s membership.

“Equity exists for our protection, just like any labor union,” said Marinelli. “If you are a member and work at a non-Equity theater, you’re out.”

There are exceptions, she said. Members can work under contract in some cases with non-Equity theaters, but they have to meet the union’s requirements.

Marinelli and Stevens said acting is not something one does in search of wealth. Sure, it happens to some. But for most, the big bucks won’t be there.

“We all have supplemental jobs,” Marinelli said.

“When I have a part, I have to budget like crazy to carry me over those times between shows,” Stevens said.

“Most of us teach dance, fitness, whatever we can to supplement our income,” Marinelli said.

“It’s a business,” Stevens added. “We have to be out there marketing ourselves, keeping track of expenses, just like any other business.”

Totem Pole’s run of “A Funny Thing” ends on Aug. 14, as does the season, the theater’s 66th. The dancers and most of the other performers will head back to their scattered homes, to the endless rounds of auditions and tryouts, taking up their “side” jobs, whatever it is that allows them to spend another flurry of weeks treading the boards of theaters in tiny towns, deep in mountain forests or on the bright-lit streets of one city or another.

For Griffin, Kastner, Koumbaros, and Wrobel, it’s back to the Conservatory of Music at the University of Cincinnati, and another year of classes and study.

At Totem Pole, the lights will go down for the season, but in the plain office trailer out back, Producing Artistic Director Rowan Joseph and his crew are hard at work, picking the lineup for next year’s shows, making phone calls, brewing up a mix of scripts, music, and talent for the theater’s 67th season.