From the outside, Central Family Restaurant looks like a warehouse or factory, with vertical tan siding and a plain... 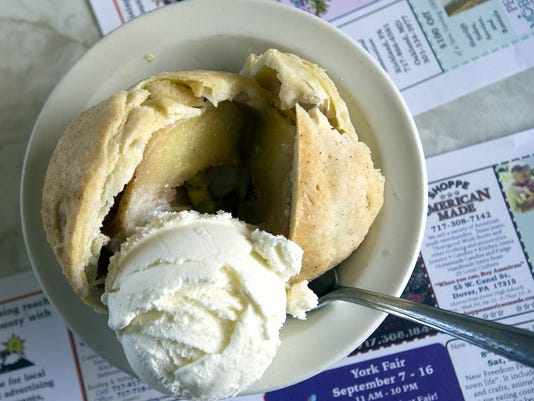 Central Family Restaurant in York offers homemade apple dumplings with ice cream, a favorite among patrons. Karl Spangler bought the restaurant in 1997, but he worked there for years before. The eatery's decor is rich with local history and York County cuisine.(Photo: FLIPSIDE &#45;&#45; JASON PLOTKIN)

From the outside, Central Family Restaurant looks like a warehouse or factory, with vertical tan siding and a plain sign with red lettering.

But inside, the York eatery brims with history and character. When I stopped by, I was surprised to see an old-fashioned U-shaped diner counter. A large photo of a York Sanitary Milk Co. Purity Ice Cream cart hung on the dining room wall. Old milk bottles and other local memorabilia rested on shelves that bordered the room.

Owner Karl Spangler said he bought some of the items on eBay and that customers gave him some pieces.

"I enjoy the whole York history thing," he said.

The building used to house York Sanitary Milk Co. and a storefront that served Purity Ice Cream. Some customers still refer to Central as Pensupreme, a family-style diner with ice cream that operated there years ago. He said some of his customers have come to the eatery for 50 to 75 years.

Central Family Restaurant opened in 1987. He worked there and helped develop many of the recipes. In 1997, he wanted to buy a restaurant, and after he put in his notice, the owner asked Spangler if he wanted to buy Central.

Along with the historic décor, the restaurant's menu screams York County. The eatery offers specials on potpies Wednesday, chicken and waffles Thursday, and macaroni and cheese Friday. Don't forget crab cakes, broccoli salad and apple dumplings. The menu even has a section for wild game - deer and buffalo sirloins and burgers.

I ordered a bowl of Maryland crab soup - another York County fave - and a side salad with honey mustard dressing. The soup was chock-full of green beans, corn, carrots, peas, tomatoes, potatoes and crab meat. It was served with Westminster Bakers Co. oyster crackers, a New England company that opened almost 200 years ago. I loved it and would order it again.

Spangler said his customers like that most of his food is made from scratch and that it's family-oriented - his parents and nephews help him out at the business.

"I'm a people person," he said. "I'm always out there trying to talk with my customers, getting to know people."

Spangler said his customers vary from families to businesspeople.

York County born and raised, he plans to stay in York and continue to improve his business. He said he wishes he could restore the exterior to its original brick, which would be more in line with the historic feel inside.

Spangler once read a comment about Central Family online that said, "Don't let the façade fool you. It's nice inside, and the food is good."