Roosevelt Tavern has been a staple of York since the 1860s. Nestled at the corner of Penn and West Philadelphia... 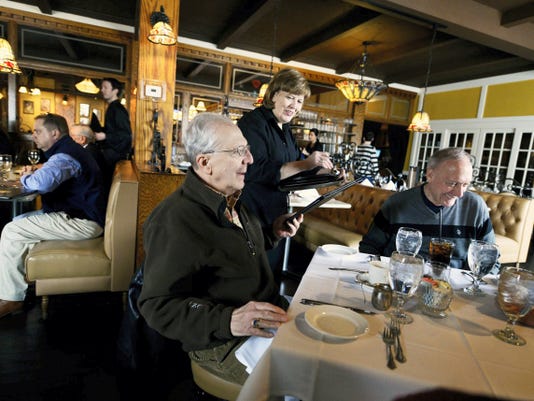 Hours: 11:30 to 9 p.m. Tuesday through Saturday. Closed Sunday and Monday.

Roosevelt Tavern has been a staple of York since the 1860s.

Nestled at the corner of Penn and West Philadelphia streets, it wasn't always the pristine, romantic pub. Through the years, the structure was home to a blacksmith shop, a cigar store and eventually the front for a speakeasy during Prohibition.

Since the ban on alcohol was lifted in 1933, the Roosevelt Tavern has become a place for locals to gather for a brew or a good meal after a wearing day in the factories or nearby offices.

In 2011, when Byron Kehr Jr. and his wife, Lauren, bought the business, they wanted to keep that sense of history intact.

As a native of York, Kehr wanted to return to his hometown after serving as executive chef at Haydn Zug's in Lancaster County.

"I knew what the Roosevelt had been before, and I felt that I could do better," Kehr said.

He set out to work with local farmers who would supply the freshest local ingredients for seasonal menus so that diners could have some confidence in knowing where their food comes from, Kehr said.

The restaurant also features desserts made in-house, fresh, never-pre-mixed salads and a slew of fresh produce and herbs grown each summer on the restaurant's rooftop garden, which Kehr used for the first time last year.

"We pick everything fresh before the shift," he said. "We had about 15 varieties of tomatoes we grew ourselves."

Upon entering the restaurant, guests are greeted by the hostess and a coat check. The pub, straight ahead, features its own menu, as well as access to the dinner menu. Cocktail juices are hand squeezed to order.

To the right is the Colonial Room, which seats up to 60 diners. The champagne booths are decorated with twisted iron and the colorful glow from stained glass lighting cascades over guests. A large fireplace is highlighted with a painting that sits atop the mantle.

Behind the Colonial Room is the Victorian Room, where another 70 diners can be seated. For private events, the Tavern Room can hold 30 people.

My husband and I were guided to a table in the Colonial Room while visiting for dinner one night. I sipped on a grapefruit crush ($8.50), a bright pink, sweet concoction that had me dreaming of spring. Our server listed several daily specials, and when we asked for menu recommendations she pointed out a few items and said, "really, everything is good."

I ordered a cup of the crab bisque ($5), a recipe that hasn't changed in 25 years, Kehr said. A side of sherry accompanies the steaming bowl and I drizzled a bit on top. The white broth is filled with big bites of the sweet meat.

I ordered the four-hour braised short ribs, accompanied by horseradish mashed potatoes and green beans ($29). My husband had the daily surf and turf special, featuring a grilled filet, bacon-wrapped scallops and Brussels sprouts ($38).

The ribs fell apart without the help of a knife. The mashed potatoes were some of the creamiest I'd ever had, with a touch of spice from the horseradish. My husband's scallops, crispy on the outside with the bite of bacon, were soft and smooth in the center.

In addition to our entrees, Roosevelt Tavern features a daily fish. The crab cakes ($28) and the Australian lamb tenderloin ($36) are also popular dishes during dinner service. The lunch menu, served until 4 p.m., also features the Skyblu Farms prime angus burger ($10), made with ground meat that doesn't have any extra fat added.

"The only fat in there is what's found in the meat marbling," Kehr said. "It's actually like a steak burger."

A half soup and sandwich special ($10) is also available for lunch, as well as an open face hot roast beef sandwich ($11) and a Camelot Valley goat cheese salad ($12).

Click here to find all of our On The Menu columns.

Quiz: Try to match the dish to its restaurant!