It took a decades-long break from the music industry and a whale-watching trip, but Trisha Bowden has finally found her niche. 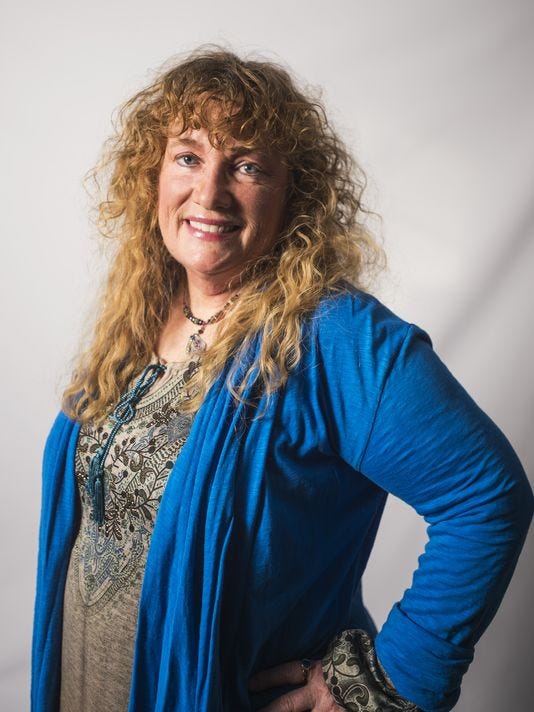 Trisha Bowden, of Hanover, who owns Mysterium Music, a local record label, produced an album that has been nominated for a Grammy.(Photo: Shane Dunlap, FlipSidePA)

It took a decades-long break from the music industry and a whale-watching trip, but Trisha Bowden has finally found her niche.

The Hanoverian singer is the force behind Mysterium Music, a record label that specializes in the production of healing and relaxation music. Portions of its albums sales benefit charities related to breast cancer, hospice, post-traumatic stress disorder and other causes.

"It feels like I'm finally doing what I was supposed to do with my life since I was a little girl," Bowden, 58, said.

"I was really thrilled because this is not the typical new age album," Bowden said of hearing about the nomination. "This is all just (Kater) and the piano, so this actually appeals to a much wider audience than just healing music. This is really about love. We need this."

Bowden started pursuing a singing career in high school, singing the blues in bars with a guitar player. She studied voice and television production at the University of Maryland, Baltimore County and the University of Texas. She sang at venues throughout Austin, moved back home to Timonium, Maryland and then relocated to Washington, D.C., where she performed in a southern rock and pop band called Southern Wind.

She followed the band leader to New York, where she spent 10 years performing.

"I never could find my niche in the music world other than singing blues," she said. "I tried pop. I had investors. I had a whole bunch of people behind me in New York. I played at all the big venues, and they all wanted me to be another Pat Benatar or whoever the pop person was of the day, and it was too cutesy for me. I couldn't really find my niche, so I actually left the business for 22 years."

Bowden moved back to Maryland and started a horse farm, where she offered horseback riding lessons and worked with youth.

She and her husband, Gary, moved to Hanover in 2002 and soon discovered David Newman, a call and response chanting instructor from Philadelphia. The somewhat hypnotizing practice of singing in English and Sanskrit focuses on God and the divine, she said.

"I found that to be what brought me back to singing again," she said.

Around 2012, Bowden and a friend attended a whale-watching trip in Hawaii, which was led by Kater.

"My friend was a big fan of his music," she said. "He had been doing spa meditation relaxation music for about 25 years at that time."

Bowden had just gone through the death of her grandmother-in-law, and the experience made her wonder if there was a type of music that could be used to calm patients and families at nursing homes. She asked Kater if he ever thought of making an album for hospice care, and they ran with the idea, producing "Light Body."

Kater encouraged Bowden to start her own label.

"He has been my mentor," Bowden said. "He's been in the business for so long."

"He taught me everything, and he's still teaching me," she said.

Kater said he enjoys working with Bowden because they "don't get caught up in the fear" of taking chances.

"We just really seem to be very willing to go for it," he said.

All four of Kater's releases with Mysterium Music have earned Grammy nominations. Bowden said the ceremony is "fun and chaotic and a lot walking," jokingly comparing it to a cattle drive. Categories like Best New Age Album are awarded in a different building than the building that houses the televised event, she said. She's walked the red carpet and attended the grand after party.

Last year, in expectation of the release of "Love," Bowden said she handed out packs of Mysterium Music's CDs with a post card about the upcoming album. They were packaged in hand-painted silk wraps made by Michelle Murphy of Hanover gift shop Stonewell Studio.

As Mysterium Music enjoys success with its latest nomination, Bowden is looking forward to producing more projects, especially now that her nephew, David Bowden, has opened Amp, a photo and audio school in McSherrystown with a recording studio, she said.

The intention of artists is important to Bowden. For her, making money is nice, but helping and giving back to others through music is paramount. She recently worked with a husband and wife duo, Agreila's Castle, on "Elders & Ancestors," an album about the couple's experience with breast cancer. Its music is dedicated to the people who helped them through their trying journey.

Bowden wants to continue donating to charities through music sales. She was friends with and is inspired by Stacy Hobbs, a breast cancer advocate and Adams County resident who passed away in November.

"If it didn't take money to run (the label) and keep it going, I would donate all of it," Bowden said.

Bowden hopes to reach out to wellness centers about sharing her music with patients. In January, Mysterium Music's catalog will be played on Healing Healthcare Systems' C.A.R.E. Radio, a music subscription service utilized by more than 400 hospitals, she said.

"The label is very young, and we're just getting started on our mission," Bowden said.

"It's never too late to find your calling and what you're supposed to do," she said. "Just keep looking. When I started singing again with that call and response chanting, the doors just opened up and everything started coming in, and it still is."

Mysterium Music's albums are available for purchase on mysteriummusic.com, Amazon, iTunes, CD Baby and locally at LifeChanges Boutique on Potomac Avenue in Hanover.