No socks: Give the gift of concert tickets

Looking for a good gift? Give the gift of entertainment.

No socks: Give the gift of concert tickets

During one episode of "The Sopranos," Tony was complaining to his therapist about some recent events that had put him into an even bigger funk than usual.

Such is the disdain for socks as the clichéd unappreciated gift, a kind of symbol for the kind of thing resorted to when all options fail, sort of like a gift card.

But this year, you can give a gift that will provide an experience, some entertainment, an evening of escape. You can give the gift of concert or show tickets.

It's a lot better than socks, but there are dangers. It would be a serious misstep to give a country music fan tickets to, say, Justin Bieber.

Here are some suggestions that can help you sort through the options.

If your mom is a fan of The Three Tenors, it's probably likely that your dad would rather suffer through root canal than listen to operatic singing for an evening. Well, here's dad's revenge. On March 4, The Three Tenors (Who Can't Sing) will visit the Pullo Center. It's not really a musical show. The three men perform stand-up and comedic sketches. Mom may think she's in for an evening of virtuoso singing. She get comedy instead. Tickets are $55 for VIP seats and $35 for others. For more information and to order tickets, visit the Pullo Center website.

For the Broadway musical person

A few touring shows come through, but the highlight of the Strand-Capitol Performing Arts Center, as far as musical theater goes, will be Feb. 15 when "Joseph and the Amazing Technicolor Dreamcoat" comes to town. The Tim Rice-Andrew Lloyd Webber musical is an iconic show. Tickets range from $54 to $85. For tickets, visit the Strand-Capitol website.

For the classical music lover

The York Symphony has a number of good concerts coming up, but among the most intriguing is the Feb. 17 performance titled "Beethoven in Buenos Aires." The concert, featuring Philadelphia Orchestra concertmaster David Kim, includes two modern pieces - Astor Piazzolla's "The Four Seasons of Buenos Aires" and Osvaldo Golijov's "Last Round" - inspired by the tango and Latin rhythms. The final piece will be Beethoven's "Pastorale." Tickets range from $9 to $39. Tickets can be order by visiting the Strand-Capitol website.

For the fan of "Dancing With The Stars

Two live performances of the popular TV show will be staged at Lancaster's American Music Theater on Jan. 18 and 19. "Dancing With The Stars! Live!" features a cast of dancers who have performed on the show. Sorry, former Cowboys running back Emmitt Smith won't be on tour. Tickets range from $75 to $105.  For more information and to order tickets, visit the theater's website.

For the country music fan

There are a few good shows coming, including bluegrass legends The Seldom Scene coming to the Capitol, but the heavyweight is a show that may take some effort to get to. Jason Aldean performs Feb. 26 at the Bryce Jordan Center on the Penn State campus in State College. Fans of Aldean probably would make the two-hour drive. Tickets are $34.75. To order tickets, visit the Jordan center's website. 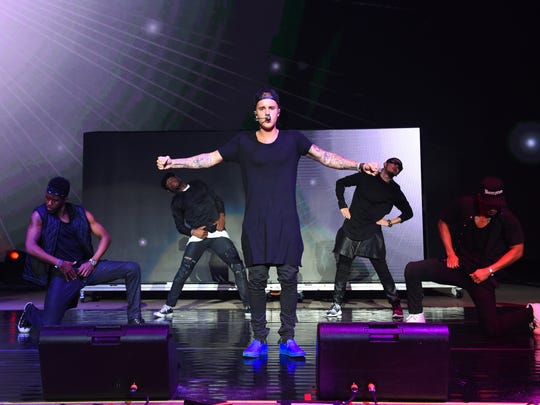 Yes, his star may have faded a little with some of his more, well, controversial behavior, but Justin Bieber is still a big attraction. He brings his "Purpose" tour to Baltimore's Royal Farms Arena on July 7. Tickets range from $47.50 to $113. For tickets and more information, visit the arena's website.

Two words: Monster trucks. Kids love to watch big trucks run things over. And that’s what they'll get when The Monster Jam comes to the Royal Farms Arena on Feb. 26, 27 and 28. Tickets range from $20 to $70. Tickets may be ordered here.

For the big, really big spender

If you have a Rolling Stones fan on your list who missed the band on its last tour, they have another chance.  The Stones are preparing to tour South America. They have a date scheduled for Feb. 20 at the Rio de Janeiro Maracana Stadium. (We selected that date because Rio, obviously.) If you have to ask how much tickets are - and how much airfare and accommodations will run - you probably can’t afford it anyway.