A little boy wakes up in a magical world of music, dance and acrobatics in this all-kid production. 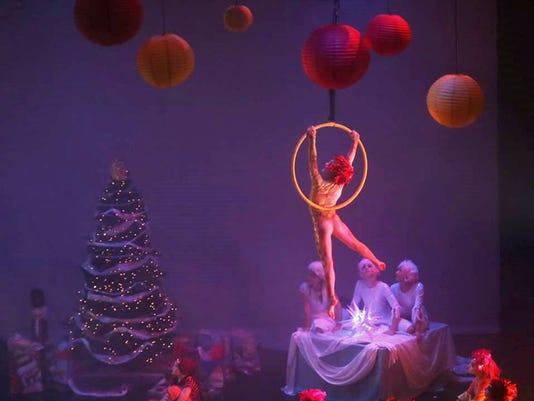 Le Petit Cirque de Noel, coming to the Capitol Theatre, is an all-kid cirque show with a holiday theme.(Photo: Submitted)

CHAMBERSBURG -- A little boy falls asleep under a Christmas tree. When he awakens, a whole new world of light, color, and sound surrounds him as the young performers in the all-children Le Petit Cirque take over the stage.

This spectacular production, coming to the Capitol Theatre for one night only, features members of the troupe, some as young as 5, performing fearless feats on trapeze and trampoline, engaging in stunts and contortions and filling the stage with music, dance, and, even karate. It is billed as the only all-kid cirque company in the world.

"This is a world-class show," said Stephanie Tack, director of the Capitol Theatre. "It is a combination of aerial work and gymnastic elements, all performed by young children."

The production has won multiple awards for, among others, outstanding production, best ensemble, best original song, best featured performer, and best lead character, and has been highly-acclaimed by many reviewers, not only for the quality of the performances, but also its inspiration.

The Gilmore-Hoerner Endowment, sponsor of the show, is helping defray various costs from the aerial rigging to bringing the young prodigies from California. The endowment seeks to further a variety of artistic presentations for the people of Chambersburg.

Behind the production is Nathalie Yves Gaulthier, who has had an amazing career herself which started when she was very young. At age 7 she wrote her first play on a Christmas theme. At age 14 she was booking talent for children her own age and younger for Broadway productions, and at 15 she started college in Montreal. Her agency has represented Oscar, Golden Globe, Emmy, and Tony award nominees.

"My passion is working hands-on with kids and creating shows for them," she said in a phone interview from California. She referred to Le Petit Cirque as a junior version of the well-known Cirque de Soleil. "Since the show began it has so snowballed in popularity that it is booked non-stop," she said.

What started out as a circus school has evolved into a more theater-based production, with gifted children not only acting but also displaying incredible levels of athleticism. For the Chambersburg performance, 10 children from the Dance Extension Performing Arts Center near Pittsburgh will also perform.  "This is their first professional show," said Gaulthier, "and they are very excited."

The children, who range in age from 5-14, don't miss a beat either in their performances or education. They attend school, even on the road, and when they travel a studio teacher goes along to make sure they don't miss their academic work.

Le Petit Cirque also has an inspirational lesson to teach, which has captivated audiences wherever they have played. "Not only is there the wow factor," said Gaulthier, 'but these are children, and the reaction of people is, 'If they can do this, I've got to do something in my life.' Our show is about human kindness."

"The holidays are a time to dream," said Tack. The capabilities of these young one emphasizes the possibilities in life and leaves attendees with an indelible memory.

Donate toys and food at the show

Le PeTiT CiRqUe carries a message about giving and love. In that spirit, the Capitol Theatre has added a new element to the show. Members of the audience can donate a toy (in its original package) to Heroes Helping Heroes.

"The toys will go to the children of local first responders and veterans who have cancer," said Stephanie Tack, theater director.

In addition, there will be a canned food drive for local families in need. Both toys and food can be brought to the theater, where tables will be set up in the lobby to receive them.

"Le PeTit CiRqUe is sponsored by the Gilmore-Hoerner Endowment," said Tack, "and since they provided us with that gift, we wanted to do something for the community that would be, in turn, a gift from the theater and those who attend."