Corrections and clarifications: An earlier version of this article incorrectly identified Harper Lee's publisher. Her publisher is Harper Collins. 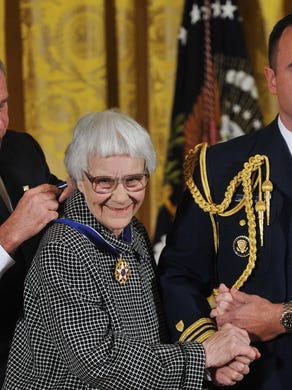 The Mockingbird Players perform 'To Kill a Mockingbird,' outside the Monroe County Heritage Museum in Monroeville, Ala., on April 8, 2015. Each spring, volunteers join together annually to perform a stage version of Lee's "To Kill a Mockingbird" on the courthouse lawn. Sharon Steinmann, AP
Fullscreen

Harper Lee visits her home town of Monroeville Ala., on May, 1961. Donald Uhrbrock, The LIFE Images Collection/Getty
Fullscreen

Harper Lee speaks with friends Wayne Greenhaw and actress Mary Badham during a visit to Lee's assisted living room in Monroeville, Ala., on May 19, 2010. Penny Weaver, AP
Fullscreen

Jennie Hausler waits to pay for a copy of the newly released book by Harper Lee, 'Go Set a Watchman', at the Books and Books store July 14, 2015, in Coral Gables, Fl. Joe Raedle, Getty Images
Fullscreen

Harper Lee's book 'Go Set A Watchman' is seen after its release at the Barnes and Nobel in New York on July 14, 2015. Kena Betancur, AFP/Getty Images
Fullscreen 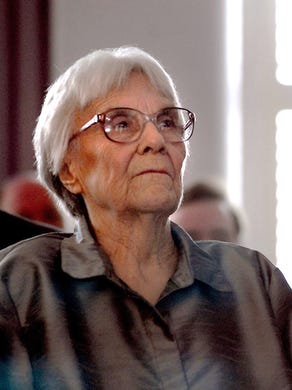 Harper Lee at an event at the Alabama state Capitol in 2007. David Bundy, Montgomery Advertiser
Fullscreen

Harper Lee accepts a token of appreciation Jan. 10, 2007, at a production of her 'To Kill a Mockingbird' at the Davis Theater in Montgomery, Ala. Karen S. Doerr, Montgomery Advertiser
Fullscreen

Al Head, executive director of the Alabama State Council on the Arts, presents author Harper Lee with a token of appreciation at a production of her 'To Kill a Mockingbird' at the Davis Theatre in Montgomery, Ala., on Jan. 10, 2007. Karen S. Doerr, Montgomery Advertiser
Fullscreen 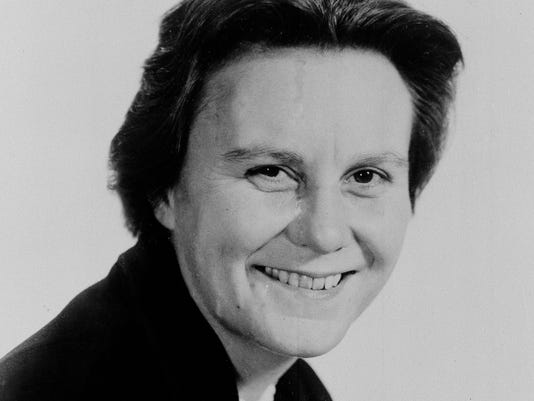 Corrections and clarifications: An earlier version of this article incorrectly identified Harper Lee's publisher. Her publisher is Harper Collins.

Harper Lee, the little girl named Nelle who grew up to write one of the 20th Century's most culture-changing novels, has died in her beloved hometown of Monroeville, Ala. She was 89.

Her death was confirmed by a spokesman for the mayor’s office in Monroeville who would not provide a name, and by a local Alabama news website.

Her publisher, Harper Collins, issued a statement from Michael Morrison, president and publisher in the USA. "We are deeply saddened by the passing of our beloved author, Harper Lee. She died peacefully last night at the age of  89."

Lee remained, to the end, immune to the blandishments of worldwide fame, which enveloped her in 1960 with the publication of her first novel, To Kill a Mockingbird. It won the Pulitzer Prize, has sold more than 10 million copies and remains in print and in every school in America, and, until last year, was her only book.

After Mockingbird was published, after the movie starring Gregory Peck came out in 1962, Lee stopped talking to the press, went home to Monroeville and closed her door. She kept it closed for decades, emerging only occasionally to write something for Lee-loving Oprah Winfrey's magazine, or to receive the 2007 Presidential Medal of Freedom from President Bush in the White House.

Even then, she didn't say much.

On the 50th anniversary of Mockingbird's publication in 2010, Lee remained elusive.

“I am still alive, although very quiet," she once wrote to her book agent, three decades after the novel was published. And she stayed that way, even as theanniversary celebrations noisily proceeded throughout the nation.

Her endearing and enduring novel, set in 1930s Maycomb, Ala. (the stand-in for Monroeville), is the story of upstanding lawyer Atticus Finch, who defends a black man falsely accused of rape in a time and place when that could get a man killed.

The story is told through the eyes of Atticus’ small tomboy daughter, Scout, and features, among many memorable characters, her neighbor pal, Dill, a stand-in for Lee’s childhood friend, the writer Truman Capote, who spent his early years in Monroeville, prompting the town to refer to itself today as the “Literary Capital of Alabama.”

After years of being left alone, Lee was catapulted back into the public eye last year with the release of Go Set a Watchman, a “newly discovered” novel she wrote in the 1950s and only the second book from her. Watchman essentially is an early draft of Mockingbird; most shockingly, it revealed Atticus Finch to be a racist. The controversy over the novel, and worldwide publicity over the reemergence of the elderly writer, made Watchman an instant best seller. It also increased sales for Mockingbird, the perennial classroom classic.

Whatever the merits of Watchman, Mockingbird will be Lee's legacy and it is enough.

“The one book that millions of us have in common,” said Mary McDonagh Murphy, author of a book of interviews of famous folk talking about how Mockingbird changed them, changed the country.

Although it may read as if it just spooled out of the storyteller, Lee actually struggled with the novel for years in the 1950s while working at menial jobs (airline reservation clerk) in New York. Then some Alabama friends in town gave her a Christmas gift of enough money to quit her job and work fulltime on the book for a year.

A skilled editor helped her turn a series of stories and vignettes into a seamless whole, encompassing themes such as coming of age, tolerance and empathy, fatherhood and hero worship, and the eccentricities of small-town people. It’s also about racism and incest, murder and injustice, fear and ignorance, and the possibility of redemption.

Huckleberry Finn ranks higher in the esteem of the academics who control the literary canon, and The Catcher in the Rye was held up as hipper. Other novels have sold more books. But Mockingbird is about something more substantial than wizards and vampires. Catcher reflected the social change of the 1960s but Mockingbirdhelped bring about some of those changes, especially in civil rights. What other book has done the same?

HarperCollins publisher Morrison said in a statement that, “The world knows Harper Lee was a brilliant writer but what many don’t know is that she was an extraordinary woman of great joyfulness, humility and kindness. She lived her life the way she wanted to — in private — surrounded by books and the people who loved her."

FacebookTwitterGoogle+LinkedIn
A look back at 'To Kill a Mockingbird'
Fullscreen

Harper Lee, author of the Pulitzer Prize-winning novel "To Kill a Mockingbird," released "Go Set a Watchman," a novel she completed in the 1950s and put aside, in July. It was her second published book. Rob Carr, AP
Fullscreen

Peck won the best-actor Oscar for his portrayal of a lawyer raising two children in the rural South during the Depression. Brock Peters played Tom, a man unjustly accused of rape and defended by Peck's Atticus Finch. Universal Studios Home Video
Fullscreen

The movie not only portrayed southern racial divides but small-town life as depicted in this scene with Phillip Alford, Mary Badham and John Megna. Universal Studios Home Video
Fullscreen

Many readers believe that the roles of Mary Badham as Jean Louise "Scout" Finch and John Megna as Charles Baker "Dill" Harris were based on author Harper Lee's portrayal of her and Truman Capote's childhood. Universal Studios Home Video
Fullscreen

Capote, a close friend of Lee's, took this photo of her in the early 1960s. Truman Capote, Harper Collins
Fullscreen

The paperback edition of "To Kill a Mockingbird" is familiar to millions of people who read the novel in high school. Harper Collins
Fullscreen

Harper Collins publishers released a commemorative edition of the book to mark its 50th anniversary in 2010. Harper Collins
Fullscreen

President George W. Bush hangs a Presidential Medal of Freedom on the neck of Harper Lee during a ceremony for the medal's 2007 recipients at the White House on Nov. 5, 2007. The Medal of Freedom is given to those who have made remarkable contributions to the security or national interests of the United States, world peace, culture, or other private or public endeavors. Chip Somodevilla, Getty Images
Fullscreen

Her agent, Andrew Nurnberg, says knowing Lee was "not just an utter delight but an extraordinary privilege.

"When I saw her just six weeks ago, she was full of life, her mind and mischievous wit as sharp as ever," Nurnberg said in a statement. "She was quoting Thomas More and setting me straight on Tudor history.  We have lost a great writer, a great friend and a beacon of integrity.”

She didn’t use the name Nelle — Ellen spelled backwards — for her book because she didn’t want to be called Nellie. But her friends and family always called her Nelle, pronounced Nell.

In addition to being a lawyer, Lee’s father was also a newspaperman and state legislator. (Lee’s oldest sister Alice became a prominent Alabama lawyer.) Lee’s mother, Frances, was by the time of Lee’s birth showing signs of mental illness, probably bipolar disorder. Harper’s sister Alice angrily denied Capote’s claims that her mother had tried to drown Harper at age 2.

Never close to her mother, the tomboyish Lee enjoyed a relationship with her father that resembled the one between Scout and Atticus. And her father encouraged her reading and writing.