And the Oscar for best speech goes to...

Winners at this year's Academy Awards had a new advantage: Producers allowed nominees to provide the names they wished to thank in advance, and showed them to viewers on scrolls that ran across the bottom of the screen.

And the Oscar for best speech goes to...

Lady Gaga performs 'Til It Happens To You' from 'The Hunting Ground.' Robert Deutsch, USA TODAY
Fullscreen

Vice President Joe Biden introduces Lady Gaga's performance of 'Til It Happens To You' from 'The Hunting Ground.' Robert Deutsch, USA TODAY
Fullscreen

Sharmeen Obaid-Chinoy accepts the Oscar for Best Documentary Short Subject for 'A Girl in the River: The Price of Forgiveness.' Robert Deutsch, USA TODAY
Fullscreen 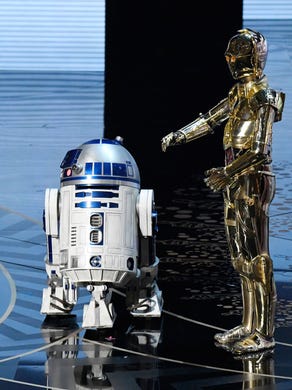 Winners at this year's Academy Awards had a new advantage: Producers allowed nominees to provide the names they wished to thank in advance, and showed them to viewers on scrolls that ran across the bottom of the screen. Overall, the speeches hardly seemed looser or livelier as a result, though some fared better than others. USA TODAY recalls a few that stood out.

Leonardo DiCaprio, for actor in a leading role (The Revenant)

DiCaprio's show of social and environmental consciousness may not have been any more surprising than his win, but it was undeniably heartfelt and potent. Addressing climate change, he said, "We need to work collectively together ... to support leaders around the world ... who speak for all of humanity — for the indigenous people of the world, for the billions and billions of underprivileged people who will be most affected by this; for our children's children, and for those people out there whose voices have been drowned out by the politics of greed." He concluded, "Let us not take this planet for granted. I do not take tonight for granted." Take a lap, Leo: DiCaprio finally gets his Oscar

Accepting with Charles Randolph for The Big Short, their adaptation of Michael Lewis' book looking at a handful of folks who foresaw the collapse of the housing market in the 2000s, McKay gave the audience some advice regarding an even bigger competition coming up this year. "If you don't want big money to control government, don't vote for candidates who take money from big banks, oil or weirdo billionaires." He didn't name names, but it wouldn't be a stretch to imagine Bernie Sanders having a grateful chuckle — and the reference to "weirdo billionaires" may have also pleased Republican rivals of a certain mogul (who trumpets his financial independence).

Possibly energized by a string of wins for Mad Max: Fury Road, White and Mangini made an almost raucous entrance, the latter dropping the F-bomb (bleeped for TV viewers). Settling down long enough to speak,  Mangini noted that George Miller, the film's director, "would tell us Mad Max is a film we see with our ears. ... Sound artists are storytellers. Thank you, George; I hope to see you around the next campfire." White said he was "proud to work on this loud, loud, loud film that actually had silence in it" and also "proud to represent my Australian colleagues." Not to be completely overshadowed by his colleague's entrance, White shouted, "Yeah!  Auss-iees! Yeah!"

9 most memorable moments at the Oscars

Sharmeen Obaid-Chinoy, for short-subject documentary (A Girl in the River: The Price of Forgiveness)

Pakistani journalist and filmmaker Obaid-Chinoy spoke out for women who face unspeakable struggles this year, with a film focusing on the survivor of a planned honor killing in her native country. In her speech, Obaid-Chinoy also acknowledged the men "who push women to go to school and work and who want a more just society for women," among them her father and husband, she pointed out. She added, "This week, the Pakistani prime minister has said that he will change the law on honor killing after watching this film. That is the power of film."

Speaking through a translator, after a sustained and hearty standing ovation, the 87-year-old composer — who had been nominated by the Academy five previous times, but never won — was the picture of humility, and visibly moved. He saluted the other nominees, citing John Williams in particular, as well as Hateful Eight director and longtime Morricone champion Quentin Tarantino. "There isn't a great soundtrack without a great movie that inspired it," Morricone said, before dedicating the award to his wife.