Hanover residents came out to a casting call on Saturday at Guthrie Memorial Library for a Hanover feature film.

Wherl Productions, a Hanover production company, was having an open casting call at Guthrie Memorial Library on April 2 for their upcoming feature film that will be shot in Hanover.

Hanover residents of aspirations big and small came out to a casting call on Saturday to audition for roles in a Hanover-based independent feature film being produced by local video production company Wherl Productions.

Some auditioners came armed to the audition at Guthrie Memorial Library with folders filled with resumes and head shots, while others simply jotted down their information while waiting in a room of around 20 people at any given time. More than 50 people in all came to audition on Saturday, according to Don Cole, the producer for the project.

“I decided to come out today because this is my true passion,” said Adam Sontag, a Hanover resident, who described his audition as excellent.

Breanna Cue, also from Hanover, auditioned for one of the extra roles, which required stunt work or fighting experience. Cue takes Taekwondo classes, so she thought she would give it a try.

“It’s the first time I’ve ever done anything like this before,” said Cue, who added she thought it would be cool to end up in the film, “even as an extra.”

Cole and director Mark Wherley want the film, whose working title is "The Escape," to be as locally resourced as possible. The feature, which Cole describes as a “reluctant hero story," is set in the not-too-distant future. The plot involves the protagonist becoming embroiled in a conspiracy and having to work with a group of people he’s not friendly with to resolve it.

The parts for the film included six speaking parts plus stunt and extra roles. This is the first film from Wherl Productions, which worked exclusively in commercials previously. Prior to the casting call, Cole said they received around 30 email submissions for those unable to attend on Saturday.

The applicants were diverse across the board, from grandparents to children that did not quite meet the 21-and-older requirement of the casting call. Wherley and Cole allowed the under-21 auditioners to read for parts that will become available later in the shooting schedule.

“Everyone gets their shot when they read with us,” said Cole, who said he was happy with Saturday’s turnout.

Along with Wherley and Cole, Joe Dressel, owner of the Hanover Boxing Club, sat in on the auditions in his capacity as the stunt coordinator for the film.

Auditioners would come in the room, discuss the role they were interested in, read a few lines and then show off their fighting skills. Dressel asked those interested in the stunt roles to perform some “John Wayne”-style moves and throw some “haymakers.”

Shawn Wagner, a tattoo artist from Dover, said he auditioned because he thought the casting call’s description of biker bar patrons fit his lifestyle.

“I was a little nervous,” Wagner said of the audition. “I think it went pretty good.”

Like many auditioners, Erin Kreider, a medical assistant from Hanover, heard about the casting call through Facebook. Her 14-year-old son, Luke, read for Cole, Wherley and Dressel in the hopes of becoming a part of the film. Kreider came in next to attempt to win an extra role. 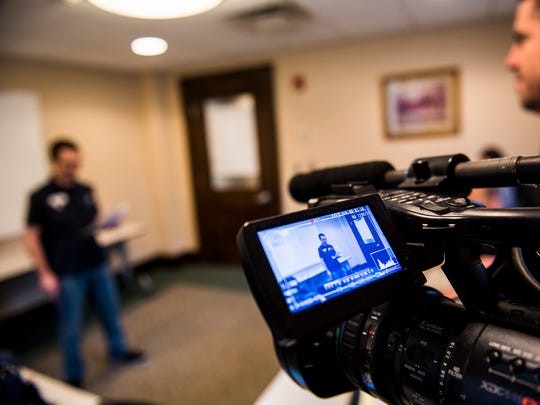 Greg Billet, of York, auditons for a speaking role with Wherl Productions on Saturday April 2, 2016 at Guthrie Memorial Library during an open casting call for the first feature film by the Hanover area production company. (Photo: Shane Dunlap, The Evening Sun)

Each auditioner was told that callbacks would be on Tuesday ahead of the first day of shooting on April 16. Wherley said he expected a 20- to 25-day shooting schedule.

Cole, Wherley and Dressel make up most of the team for the small-budget film. Cole and Wherley wrote the script, and Wherley will edit most of the finished product. Referencing the credits that roll at the end of the movie, Cole estimated he and Wherley would make up 200 of them.

Greg Billet, a writer from York, said he wanted to learn more about performing and “come out of my shell a little bit.” He said he came into the audition nervous, but felt happy about the results. Billet was surprised to see an opportunity like this in Hanover.

“They don’t shoot a lot of films around here,” he said.

After the auditions wrapped, Cole said they found a couple of major roles for the film, and the diversity of the people who auditioned on Saturday will help them in the future.

“We have a tremendous pool of people to pull from,” he said. 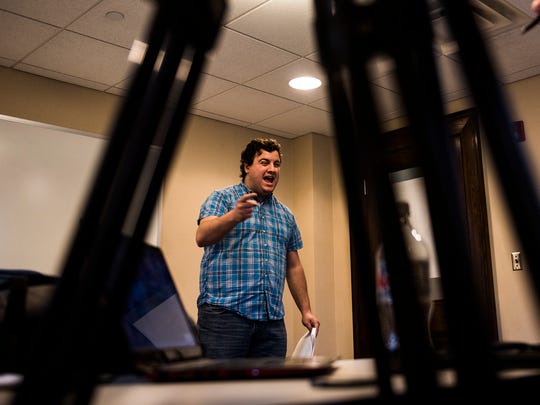