Bells ring over Mercersburg Academy campus in May

Bells ring over Mercersburg Academy campus in May MERCERSBURG - Carillon recitals featuring four different carillonneurs will be held on five successive Sundays May 1–29 from Mercersburg Academy's Swoope Carillon, located in the tower of in the Irvine Memorial Chapel on campus, 300 E. Seminary St., Mercersburg. Recitals begin at 3 p.m. and can be heard from the Quad. All are free and open to the public.

Julia Littleton of Washington, D.C., will play on May 1 and also on May 22. Littleton has performed in Princeton, New Jersey; Valley Forge; Middlebury and Northfield, Vermont; and across the Chicago area. She has made frequent appearances at Mercersburg, starting in 2000 when she played a recital for the Guild of Carillonneurs in North America's carillonneur exam.

Littleton began her carillon studies during her college years at the University of Chicago, and later became one of the university’s assistant carillonneurs, giving weekly concerts on the Rockefeller Chapel carillon. She has taught piano and also performs as a soprano soloist in the Washington, D.C., area, where she is a full-time journalist. 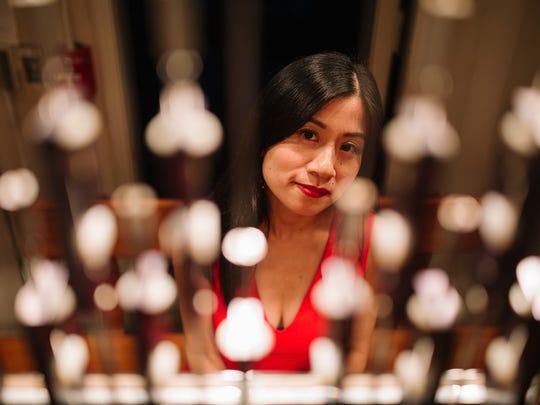 Tiffany Ng, an assistant professor of carillon at the University of Michigan, will give the May 8 recital in honor of female composers who have juggled the great responsibilities of both creative artistry and motherhood — including her own mother, Evelyn. The program features two world premieres commissioned especially for Ng’s Mercersburg debut.
“The Same Things I Became” by Margot Murdoch (co-commissioned with Neil Thornock) is a musical exploration of the relationship between mother and her adult children. Ng will also perform a piece by Jen Wang, whose title will be announced on the program.

Ng holds a doctorate in musicology and new media studies from the University of California, Berkeley, where her dissertation explored how two contemporaneous developments shaped each other: Cold War technology and diplomacy, and the historical revival of organ and carillon building in America and the Netherlands. Ng earned a master’s degree in organ from the Eastman School of Music and a licentiate from the Royal Carillon School in Belgium. Her concert career has taken her to major festivals in a dozen countries in Europe, Asia, and North America, where she has premiered more than two dozen acoustic and electroacoustic works. She also serves on the faculty of the North American Carillon School.

Ed Nassor of Washington, D.C., will give the May 15 recital. Nassor, who is the cathedral carillonneur at the Washington National Cathedral, joined the music department at the cathedral in 1990. He performs preludes before Sunday Holy Eucharist and Saturday afternoon recitals on the Bessie J. Kibbey Carillon. In 2002 he was formally recognized by the dean and the chair of the Cathedral Chapter as the first cathedral employee to earn a doctorate in his field while employed at the cathedral. His doctor of musical arts and master of music degrees are from the Benjamin T. Rome School of Music at the Catholic University of America. While working on his doctoral degree, he became the first American to be awarded a Fulbright grant to study carillon in the Netherlands.

Before working at the Washington National Cathedral, the National Park Service appointed him director-carillonneur of the Netherlands Carillon in Arlington, Virginia. Nassor has continuously performed and scheduled guest carillonneurs for the annual carillon recital series sponsored by the National Park Service since 1987. He is a 30-year member of the Guild of Carillonneurs in North America and has served as a juror on the guild’s student advancement committee.

Mercersburg Academy Carillonneur James Brinson, who will perform May 29, will also give recitals Friday, May 27, at 6 p.m. (one hour prior to the school’s annual Baccalaureate service, which starts at 7 p.m.) and Saturday, May 28, at 9:30 a.m. (an hour prior to the start of Commencement). Brinson has served on Mercersburg’s music faculty since 2003 and took on the role of carillonneur in 2009. He is a graduate with distinction from both Union Theological Seminary’s School of Sacred Music and Rhodes College. A member of the American Guild of Organists, the American Choral Directors Association, and an associate member of the Guild of Carillonneurs in North America (GCNA), Brinson is experienced in choral arts, organ performance, and music history.

Carillon recitals scheduled for May 8 and May 15 are funded in part by an endowment established by Robert M. Kurtz Jr. ’52 in memory of his parents, Robert M. and Dorothy Betts Kurtz.

The Swoope Carillon hosts frequent recitals by Brinson and other invited guests during the school year. It is one of 163 traditional carillons in the U.S. and includes 50 bells. Following the end of the academic year in June, weekly carillon recitals will resume in September 2016 at the beginning of the next academic year.