Geek crafts are officially a thing. Do a Google search and you'll see a myriad of blogs devoted to geek crafts that go beyond Etsy, not to mention Pinterest. BuzzFeed and Reddit have also dedicated pages to DIY geek crafts. 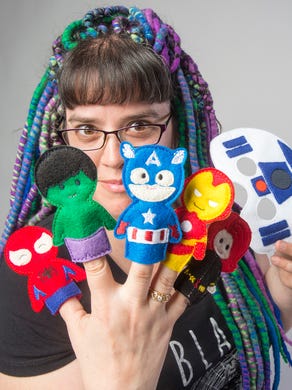 Geek crafts are officially a thing. Do a Google search and you'll see a myriad of blogs devoted to geek crafts that go beyond Etsy, not to mention Pinterest. BuzzFeed and Reddit have also dedicated pages to DIY geek crafts. Geek crafts give fans of fantasy, sci fi and superheroes an outlet for their passion and their creativity. They can create something that represents their favorite fandom, then display it for the world to see.

Geek crafts have spawned a cottage industry. Lots of small businesses attend comic cons and festivals to sell their homemade wares, from patches and buttons, to toys and props, to jewelry and accessories. Two successful geek craft businesses are right here in Pennsylvania.

Eight years ago, Bob Lambert of Philadelphia was laid off from his job. He turned his hobby into a business. "I decided that the next person who was going to fire me would be me," he said.

Lambert founded Needle Gnomes to sell his crocheted creations, along with his wife Natalie's knitted items. While stuffed dragons are his bestsellers, he also crochets and stuffs Death Stars ("Star Wars"), Mario and Luigi (Nintendo) dolls, the Tardis ("Doctor Who"), Pikachu ("Pokémon") and a lot of other characters from fandoms. Lambert said, "I can't keep Pokéballs in. I just started making Marvel superheroes. I can't keep up with Deadpool."

7 of the coolest costumes from Central PA Comic Con

Needle Gnomes also makes costume items for Renaissance Faire customers. They crochet and knit shawls, scarves and "wristers," which are fingerless sleeves that are worn over a shirt and under a jacket.

In the beginning, Lambert and his wife just hoped someone would buy their crafts. "We were going for sustainability. We were going to see if it could run itself." No one is more surprised than Lambert that a business based on crocheted crafts is so successful. "I didn't try to force anything. It's mind blowing that I'm still doing this," he said.

Needle Gnomes is so successful that the Lamberts wanted to share what they've learned about owning a craft business. They recently hosted a panel on marketing and branding at Zenkaikon in Lancaster. "We packed the room," Lambert said.

Find out where to get free comic books in southcentral PA

Another business that grew out of a passion for geek crafts is Tomboy Togs. Emily Bowman of Lancaster started out making quilts and dresses for friends. Her imagination fired up after purchasing an embroidery machine. She discovered patterns for all sorts of felt crafts that had a geek flair, like masks, hairpins, crowns and finger puppets. Now she has an Etsy store.

Her bestsellers are finger puppets that are based on movies and TV shows. "I had a customer who wanted an Agent Carter finger puppet," she said.

While she always has an inventory of popular items, she frequently takes custom orders. "I get people who come in and see something that I make and say, 'I wish you had x.' Well, I can make it for you. A lot of people will buy it, sight unseen."

You would think her items were made for children, but Bowman said only half of her customers are kids. "I get parents that will drag their kids in," she said.

You can find Tomboy Togs at the upcoming Fairie Festival at Spoutwood Farm, the Harrisburg Comic-Con and the Lititz Craft Show.

If you're looking to make your own geek crafts, a Google search reveals dozens of websites with downloadable patterns and instructions.

- "Dungeons & Dragons" fans can find instructions for making their own dice bag at HubaDub.

- Knits by Brit has a free pattern for knitting fingerless gloves, like the ones seen on "Outlander" or at the Renaissance Faire.

- If you have mad crochet skills, you can show off by making an X-Wing fighter ("Star Wars") blanket from a pattern designed by MJ's Off the Hook Design.