Drink a beer. Save a two-headed calf

Drink a beer. Save a two-headed calf

The first thing you notice when you walk into the Indian Steps Museum is the two-headed calf.

The calf, named Carol, was born in the Urey farm, not far from the museum, up the hill overlooking the Susquehanna, in the 1930s, an anomaly, and a fairly uncommon one. It's called polycephaly, or in the case of the Indian Steps calf, diprosopus, meaning that the critter has two faces spliced onto one head.

Carol lived only two days; neither of her faces was connected via an esophagus to her digestive system so she starved to death. The Ureys took her to a taxidermist and then donated her to the museum, where she remains — in remarkably good shape — to this day.

"It has no historic significance," said Martin Weiss, executive director of the Conservation Society of York County, which owns and operates the museum. "But we can't get rid of it. I get emails from all over the world asking if we still have the two-headed calf." 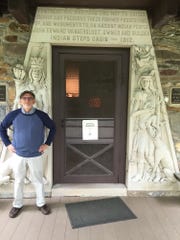 Martin Weiss, executive director of the Conservation Society of York County, stands by the front door of the Indian Steps Museum. The museum was built in 1912 to preserve and honor Native American heritage. (Photo: Mike Argento, York Daily Record)

Carol, as much as the Native American artifacts that trace life along the lower Susquehanna back through the millennia, is a signature piece in the museum's collection.

And if you care enough about the two-headed calf to make sure it has a home, you can help by heading to Red Lion on June 4 for the second annual Songs & Suds Festival at Vulcan Park. Proceeds from the event go to the Indian Steps Museum.

"We are trying to keep this building alive," Weiss said. "It's 104 years old and we want to make sure it will be here for the next 104 years."

The museum has the usual expenses, plus the added cost of maintaining a more-than-a-century-old building. "It's a very expensive enterprise," Weiss said.

The conservation society receives no government funding, relying on fees for services, programs and income from its gift shop to stay solvent.

7 reasons why Indian Steps Museum stands as 'an amazing place ... in York County'

It is a York County institution. Most people who grew up in York County probably remember a school field trip to Indian Steps, the memory of Carol remaining the most vivid memory. For decades, the museum and its grounds had been the site of a copperhead roundup, attracting snake handlers from all over the country. The event had been scrapped years ago, for a variety of reasons, including safety and the fact that as a conservation society, it seemed like an odd thing to sponsor.

There is a photo of Vandersloot dressed in a long Indian headdress and Native American garb in the museum's Kiva, a replica of a circular room used by southwestern tribes for religious rituals. The room is also festooned with a couple of swastikas, which were considered symbols of good will by the native tribes — that was, until the Nazis co-opted it, turned it 45 degrees and made it into a symbol of hatred and insanity.

"We kept them because they are of historic significance," Weiss said.

He also noted that the swastikas were carved into the building's stone long before the Sanskrit glyph was adopted by the Nazis.

It's strange to see it there.

Almost as strange as seeing a two-headed calf.

Where: Vulcan Park in Red Lion

The event features a number of local bands throughout the day, including Dr. Slothclaw, Hexbelt, Buzzard Luck, The Blue Soles, GMO, Tony Ryder and the Wild West and others. Breweries such as Wyndridge Farms, Black Cap Brewing Company, South County, Something Wicked and Molly Pitcher Brewing will be pouring pints.

For more information about the event, visit redlionpa.org.