Although the television show “Mad Men” ended this year, its influence lives on with the renewed interest in mid-century modern architecture. “Thanks to the series, our building is popular again,” said Beth Hager, director of strategic initiatives at the Pennsylvania Historic and Museum Commission.

Hager was just one of several officials to address the crowd who gathered at the Pennsylvania State Museum Sunday, Oct. 25, to learn which photographers would take home awards at the opening of a juried photography exhibition of mid-century modern architecture.

Held to coincide with the 50th anniversary of The State Museum and Archives Complex and to highlight its addition to the National Register of Historic Places, the exhibition is based upon the premise that the commonwealth is home to some of the nation’s earliest modernist buildings.

In March, the call went out to Pennsylvania photographers to discover, capture and submit images of buildings erected during a 50-year period ranging from 1930-1980, and many rose to the challenge. On Oct. 25, guests got their first glimpse at the nearly 100 images that were selected by a trio of judges with expertise in photography and preservation.

“We reached out to photographers through camera clubs, social media and word of mouth. Our goal was to shine a light on this particular type of architecture to enable people to see what is hidden in plain sight,” said Hager.

Churches, schools and commercial structures are represented in the exhibit, along with buildings designed by world-famous architects like Frank Lloyd Wright, Richard Neutra and Louis Kahn. 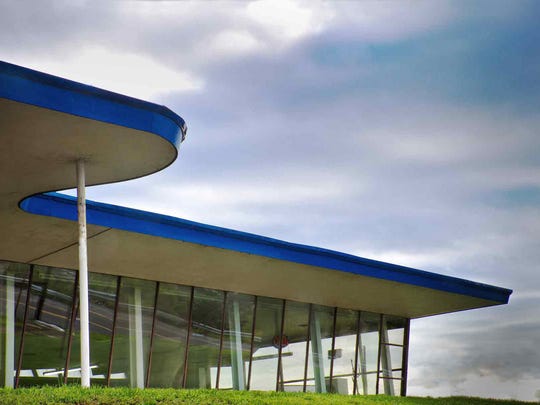 Local award-winning photographer Ted Van Pelt strolled the exhibition, viewing various works and socializing with friends whose images had been chosen for the exhibit. The Dillsburg resident submitted several shots of Wolfe’s Diner, located in his town and built in the 1950s by the Jerry O’Mahony Dining Car Builders.

“My interest in photography goes back to the 1970s,” said Van Pelt, who meets with fellow enthusiasts at camera clubs around the area.

As guests gathered in a reception area to learn who won the competition, Hager announced that Camp Hill photographer Andrew Hoff’s depiction of Barlup’s Appliances in Enola was declared “Best of Show.”

Joseph Skompski of Uniontown earned the award for the “Best of The State Museum and Archives Complex” for his photo of the archives tower structure.

After the ceremony, juror and Philadelphia-based photojournalist Betsy Manning remarked on the features that impressed the judges in Hoff’s ‘Best of Show’ photo.

“I think what I like so much about Barlup’s is the crazy roof. Only in the middle of the century are they going to do something so outlandish and impractical and I think it’s beautiful. Even though you don’t see the entire building, it just captures the mood.”

Juror Dennis Hockman, editor-in-chief of Preservation Magazine, said that the competition was “really close,” adding, “I think the combination of the artfulness of the photograph itself and the way it captured the spirit of modernism is what gave it the extra notch to make it the ‘Best of Show.’”

Jim Vaughan, PHMC executive director, said that he hopes the exhibition will shine a light on the significance of preservation. “This is an important exhibition for Pennsylvania because mid-century modern structures appear across the state. We hope that recognizing the merit in the architecture will improve the likelihood of preservation and revitalization of Pennsylvania’s communities.”