A look at York's fine art scene in January and February 2016.

A look at the fine arts scene in York in the early months of 2016.

The Rooted Artist Collective in York is hosting and selling the works of local friends and family to the gallery's three owners.(Photo: Submitted)

Art galleries are perfect places to hide from the chill of winter. Luckily, York's art galleries have plenty to offer for those seeking an artistic touch to any evening out.

Here are just some of the upcoming events:

The walls of the Rooted Artist Collective, which has only been opened since May, are adorned with many works of family and friends to the gallery's owners, said Dustin Nispel, a co-owner. But there are opportunities for you to make your own artistic mark.

Jan. 14 and 15, the shop will teach aspiring painters in educational sessions. The business also sells books of poetry and some of the art on display.

If you go: The gallery is at 101 N. Newberry Street in York. Look for special prints from the likes of Salvador Dali, Henri Matisse and even John Lennon at The Rooted in March.

The Parliament Arts Organization set up their current exhibition, Calm Chaos, a couple weeks ago and the show continues through Feb. 28. 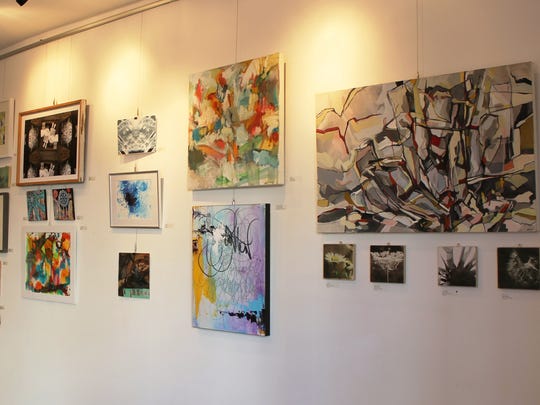 A medley of art hangs on the wall of The Parliament Arts Organization in York for their "Calm Chaos" exhibit. (Photo: Submitted)

"It's basically a mixture of really calm pieces whether it be the colors or content and some chaos," said Stacy McClain, the programs director for the group.

One participating artist, April Armistead, said in her statement that the main goal of her work "is to capture and express an energy or a feeling, and then let the viewer work out for themselves what it is."

"I try to instill that playful freedom in my work by often painting with my hands instead of brushes and using bright childlike colors," she said.

York College of Pennsylvania gallery director, Matthew Clay-Robison, said he selects the works on display not only to correspond with what students are learning at the time but, more importantly, he selects "artists whose work will stretch our students' understanding of what art can be."

The gallery will be showing the works of three artists, and hosting them for lectures, over January and February. That will be followed by the annual exhibition of student art from March 10 through 23 with a reception on March 10 from 5 to 7 p.m.

British-born but New York City-based artist Sue Coe has been described by art critic Donald Kuspit as "the greatest living practitioner of confrontational, revolutionary art." The college will play host to the artist's "Porkopolis" exhibition and an exhibition of original artwork from her book "Pits Letter." Both will be on display from Jan. 20 through Feb. 20.

"This body of work by Coe challenges viewers to consider the ethics and environmental impact of the food they eat," Robison said of "Porkopolis," adding that Coe will speak at the college's DeMeester Recital Hall on Jan. 28 at 5:30 p.m.

Lukova: New York-based graphic artist Luba Lukova will speak at the DeMeester Recital Hall on Feb. 24 at 5:30 p.m. with reception to follow. Her work has dealt with social justice issues and has been shown in New York, Boston, Paris, Washington, D.C., and Japan. Lukova will serve as the design juror for the March student exhibition.

Morgan: Central Pennsylvania native Rebecca Morgan, who is serving as a visiting member of the faculty/artist at George Mason University, will speak Feb. 25 at 5:30 p.m. at DeMeester Recital Hall on her art, described by the college as emanating "from stereotypes of rural Appalachia" that is "humorous, benevolent, and savage at turns." Morgan will serve as the art juror for the March student exhibition.

If you go: The Gallery is located on the first floor of Earle and Evalyn Wolf Hall, which can be accessed from the parking lot to the left of the college's main entrance at 441 Country Club Rd. in York. It is open from 9 a.m. to 5 p.m. on Monday, Tuesday and Friday but is open until 9 p.m. on Wednesday and Thursday and is open from 10 a.m. to 4 p.m. on Saturday.

The first showing York College of Pennsylvania is planning at Marketview Arts Gallery Hall following its recent purchase of the building, according to Dominic DelliCarpini, dean of the Center for Community Engagement at York College, is a collaboration between multiple organizations to focus on how York's residents see the city.

Clay-Robison said the exhibition "My York City," which will run in February, is a collaboration between the college, the Creative Alliance of York County and Downtown Inc. The proceeds from any art sales, which are of all mediums and genres, will be split in half between the artist and funding for both the Creative Alliance and Downtown Inc, said Kelly Gibson, the director of communication and engagement for the cultural alliance.

The Coni Wolf gallery, on the second floor of the building, will host Japan-based graphic designer Ian Lynam during the same time, Clay-Robison said.

Gibson added that retired photojournalist Randy Floum has also been teaching area teenagers how to produce documentaries. That work will be on display at York's Capitol Theater throughout the month.

If you go: Marketview Arts is located at 37 W. Philadelphia St. in York, across the street from Central Market York. It maintains hours and days of operation to coincide with the market, which is 6 a.m. to 2 p.m. Tuesdays, Thursdays and Saturdays. "My York City" will have a sneak preview on Thursday, Feb. 4 from 6 to 8 p.m. and will officially open the following day, First Friday, from 5 to 7 p.m.