A story of how the York city community impacted a local artist's career.

A story of how the York city community impacted a local artist's career.

We say the words all the time. We put them on T-shirts. We hashtag them in tweets. But what do we really mean?

As people participated in #iloveyorkcity-themed events for York’s First Friday on Feb. 5, we asked them what they love most about the city.

Here’s one man’s story about why he loves York and how the York city community impacted his career as an artist.

“It’s too dangerous,” Ayala remembers hearing. “Just stay close. You have everything you need on campus.”

On his first free weekend, he walked up and down the streets of downtown York, thinking it looked remarkably similar to where he grew up in Reading.

But when he looked closer, he found an emerging arts community that would soon impact his life in more ways than one.

Living as a full-time artist

When Ayala first moved to York to study mass communications with a focus in video production, he said he never thought he would stay in the area post-graduation.

“I thought I would put in my four years and be off,” he said. “I thought I would end up being a camera person for a news station or something like that and do a 9-to-5 and always be doing art on the side as a hobby or passion project. I never realized you could make a full-time living as an artist.”

But 19 years later, Ayala, now 37, is still here, working full-time as an artist, and he said he owes it all to the York city community.

“All it took was a couple of friendly faces, both students at York College and some people I met at businesses downtown, who said if you really like this, you should check out that,” Ayala said.

One suggestion led to another, and before he knew it, he was working as the director of education and programs as well as assistant gallery director at Creative York, formerly called YorkArts.

“Existing in a thriving arts scene motivates you as an artist,” he said. “When you see your peers and friends doing cool stuff and making cool stuff, it inspires you to do the same.”

That’s why in 2007, after working at YorkArts for six years, Ayala resigned from his position, took a leap of faith and began pursuing a career as an independent artist.

Since then, he’s created several mosaic murals in downtown York, including two in the parking garage across from White Rose Bar & Grill. He’s done live video mixing with his audio-visual performance group, Aortic Valve, and he’s worked with the Pennsylvania Council of the Arts Artist in Education Program to bring art into classrooms across the state. This spring, he’ll also be returning to Creative York as a teaching artist.

But what Ayala said he’s most proud of is his ability to make a living doing what he loves.

“And I’m not sleeping on my parent’s couch,” he said.

Thriving in a family-like community

This career wouldn’t have been possible if he had moved away right after college like he originally planned, Ayala said. 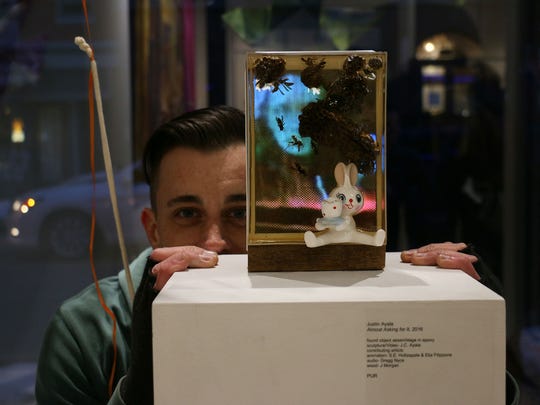 “I think if I had started in a larger market, I wouldn’t be doing what I’m doing today,” he said. “I have a lot of friends who are artists all over the U.S. and there’s a lot less of a sense of community.”

Ayala described the arts in larger cities as very guarded and territorial.

But in York, he said, it feels like a family.

“Because it’s more of a fostering community than a competitive community, your fellow artists are always there to answer questions and work together with you,” he said. "It’s not like a magician being afraid of revealing his tricks. Everyone wants to see everyone improve.”

Enhancing the arts in York

In the last 19 years, Ayala said he has seen a lot of improvement.

Musicians who used to get together in garages are now touring bands, he said, and emerging artists he’s met over the years have formed their own galleries.

“When I first moved here, there were one or two galleries,” he said. “Now, we have an arts scene here in York where you can make an evening of walking from one place to another, and probably not get everywhere you want to go in a night.”

Several of Justin Ayala’s works – including audio-video sculptures, mosaics, collages and mixed media paintings – can be seen on display at Creative York and Hive Artspace in downtown York.

People chat on the sidewalk while inside, patrons look at art, at Creative York on the first block of North Beaver Street during February's First Friday in York. Kate Penn, York Daily Record
Fullscreen