An original Salvador Dali signature on “The Invisible Face” at The Wanderlust Gallery. Dali signed parchment before his death that lithographs were later printer on. Paul Kuehnel, York Daily Record
Fullscreen

The Wanderlust Gallery at The Rooted Artist Collective, while work goes on expanding gallery space though the doorway at right. Paul Kuehnel, York Daily Record
Fullscreen

Downtown York is becoming a hotspot for famous artwork.

Just three months ago, local art lovers could find original prints by famous artists like Salvador Dalí and Pablo Picasso on the walls of The Rooted Artist Collective for the gallery's "Two Bodies, One Soul" exhibit.

Now, to celebrate one year as a visual and performance art collective in downtown York, The Rooted is bringing back some of those works and more for the opening of a new gallery space, where visitors can find works by internationally renowned artists all year long.

Where to see Dalí, Picasso art in downtown York

“We want to have a reputation of being a place where people can find famous fine art and local art as well,” co-owner Dustin Nispel said.

The new space, which will open on First Friday June 3, will be called the Wanderlust Gallery.

Wanderlust means a desire to travel and explore the world, Nispel said, and that’s exactly what this gallery is about.

“We call it the Wanderlust Gallery because when you come into it, it’s a piece of everything from all over the world,” Nispel said. “When you step in the gallery, we want you to have that feeling like I’m not in York right now. We want to have real cultural appeal.”

The gallery’s first exhibit will include nine lithographs – half from The Rooted’s March exhibit and half that are newly acquired from local private collectors – by famous artists, like Dalí, Picasso, Henri Matisse, René Magritte, Al Hirschfeld, Peter Max and Marc Chagall. Many of these works – which range from $500 to about $11,000 – are signed by the artist and include a certificate of authenticity.

Two hand-carved ceremonial masks from Mexico and two Eskimo stone sculptures will also be part of the exhibit.

“Alice’s Adventures in Wonderland” by Dalí is probably the most valuable work in the exhibit because it includes two pieces – the book’s title page and frontispiece with Dalí’s signature – in one frame, Nispel said.

But Nispel said he’s most excited about The Rooted’s newly acquired Dalí work, “The Invisible Face.” 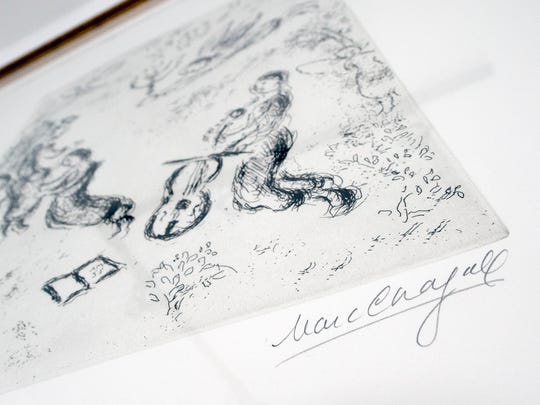 Before Dalí died, he signed about 3,000 pieces of blank parchment paper, Nispel explained. This lithograph was one of the first five printed on one of those signed pieces of parchment about 10 years after his death.

“There’s only a handful of these lithographs left in the world,” Nispel said. “It’s a very limited edition piece.”

The Wanderlust Gallery’s collection will gradually change as pieces are sold, Nispel said. But visitors can expect an entirely new exhibit about every three months. Sometimes, the exhibit will feature famous works and sometimes not. But visitors will always be able to find a variety of international art in the gallery space.

“I think it’s going to be an amazing opportunity for the public to get a chance to see famous artwork from around the world and on a rotation too, so there will always be something back there that is new and different,” Nispel said.

Also opening June 3 will be The Rooted’s “Show Us Your Best” exhibit, featuring works by more than 40 local artists.

"We want to expose local art to those seeking out Dalí's or Picasso's," Nispel said.

The theme of the exhibit will be masterpieces.

“A lot of times, what we call our masterpieces never fit in an exhibit’s theme for different galleries we submit to,” Nispel said. “So, this is an opportunity for artists to show what they’re made of and display their best pieces without having the confinements of a theme.”

Works will range from photography to oil to shadow boxes to acrylic.

The following pieces will be on display in the Wanderlust exhibit:

What: Wanderlust Gallery opening reception (with live music and refreshments)