Editor's note: This is part two in a three-part weekly series on comic books and comic store, leading up to Free Comic Book Day on May 7.

“I have close to 4,000 comic books, not all of them are Turtles, though,” Bankey said. “I have action figures, I have art, I have posters – I even have weird stuff like party hats, bicycle horns and band aids. If it has Turtles on it, I have it. They call me Turtle for a reason.”

Bankey, 26, lives in Palmyra and works as a cook at Lebanon Valley College, but he is trying to turn his hobby into a business.

“I love collecting, and then the television show ‘Comic Book Men’ came out, and I was like, ‘These guys have the best job in the world. They get to sell comic books and talk to nerds all day. Why can’t I do that?’” 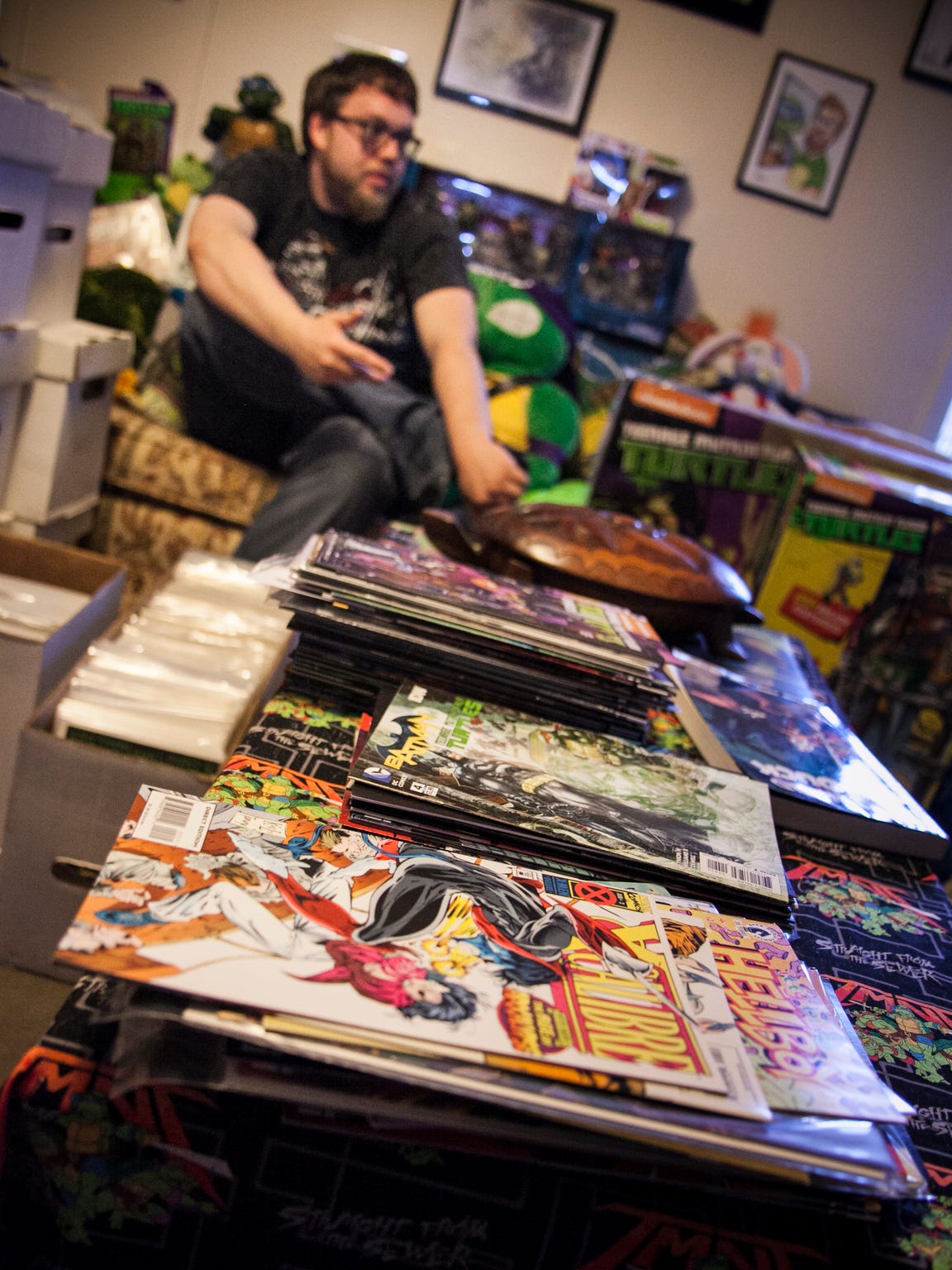 His father, Rob, a Hot Wheels collector, has joined him in this fledgling business called Big Rob &Turtle’s Toys & Comics, and they have bonded over their hobby.

“My dad is into hot rods, and this is a combination of me and him together,” Bankey said. “We didn’t get along when I was growing up, but we have recently connected over this.”

Bankey got into Teenage Mutant Ninja Turtles when he was a child, and became a comic book collector not long after.

“I have two other siblings around the same age as me, so we didn’t have a whole lot growing up,” Bankey said. “My uncle and I are 10 years apart, so when I was growing up, I’d get all of his stuff as hand-me-downs, and my mom and dad would buy me stuff here and there too.”

Bankey received his uncles Teenage Mutant Ninja Turtle action figures and other toys sparking his love of the pizza-loving mutants.

“I always had them around – I didn’t really know a whole lot else,” he said. “Spider-Man? Superman? Who cares. Turtles, that’s where it’s at. They were my favorite thing growing up.”

After a brief hiatus in collecting Turtle toys, Bankey got into collecting comic books.

“When I turned eight or nine, the Turtles weren’t around as much, so I took a little break,” he explained. “It took me starting my first comic book collection to get back into them.”

The second film featuring Marvel’s X-Men, specifically a scene involving the character Nightcrawler bursting into the Oval Office and fighting the Secret Service, is what got him into comic books. 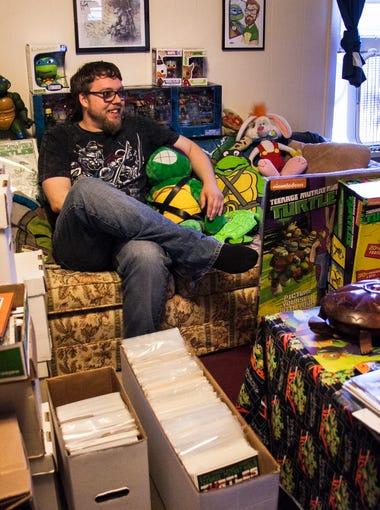 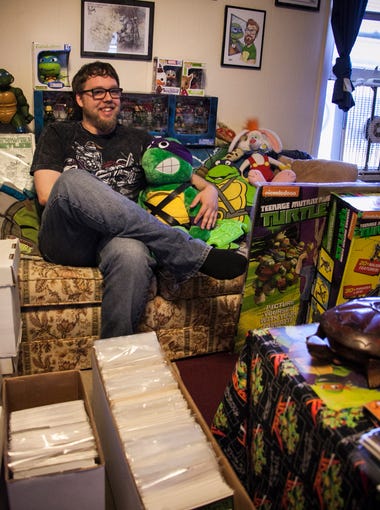 “My first comic books that I bought was when I was with my grandfather, and it was a four-issue miniseries of Nightcrawler,” Bankey said. “Nightcrawler looks like a demon, but he is devoted to God, and feels that God made him look that way for a reason, so instead of becoming a villain, he tries to do good. I am in no way religious, but the way he approached things was really amazing.”

Bankey found out that Kevin Eastman and Peter Laird created the Turtles as a joke and took some inspiration from Marvel’s blind-lawyer superhero.

While Bankey is best known for his passion for the Turtles, his collection also centers on comic books featuring characters like Hellboy, Howard the Duck, Kiss and Daredevil. He buys and reads other comics, but unless he is really into them, he said he’ll sell them at comic cons.

“The attic is full of toys, my bedroom and closet is full of stuff, my bathroom is done in Turtles – I have so much stuff that I know that at some point I’m going to have to part with some of it,” Bankey said. “My way of thinking is that if I have to part with it, I want to give it to people I know want it too.”

“My way of thinking is that if I have to part with it, I want to give it to people I know want it too.”

By selling at a comic con, Bankey knows that the comics and memorabilia he sells will be valued and care for, and it helps him stay involved in the comic book community.

“You go to yard sales and they have comic books up for 50 cents – they obviously don’t care – but you go to a comic con and you have people sorting through the boxes and they find a book, and they’re like, ‘Oh man, look what I found,’ and you ask, ‘Do you remember reading that issue, man?’ and it starts a whole conversation,” he explained.

Out of his thousands of comics, Bankey has one that he considers a true investment.

“The only book I got as an investment is this 9.8 graded, 2012 San Diego Comic Con edition signed by Kevin Eastman, one of the creators of the Ninja Turtles,” Bankey said. “I got it from a guy at Dimension X Comics in Harrisburg for $150.”

His passion for the Turtles is more than just a hobby or a business, Bankey said. The comic book’s focus on family, honor and humor has had a lasting effect on him as a person.

How to get started collecting comics

Getting into comic books can seem confusing since many of the titles offered from big names like Marvel and DC have been ongoing for decades making it difficult to decide where to jump into a series.

Ralph Watts, owner of Comics and Paperbacks Plus, 201 E. Main St., Palmyra, has some tips for anyone who is looking to get started in reading and collecting comic books.

“If they tell me they are into superheroes, I find out which superhero movie they’ve seen last or enjoyed the most and direct them to those titles,” Watts said.

However, some people who want to start reading and collecting comics may not be into superheroes, so Watts recommends starting their collection based on what regular books they like to read or television shows the watch.

“I’ll ask them what they watch on television and that will tell me what their interests are – if they’re into science fiction or whatever,” Watts said. Comic book shops are alive and well in the digital age

Once the new comic book collector has determined their interests, Watts said he will direct them to the latest story arc of a specific title, or a graphic novel that reprints a title’s first storyline.

Watts said new collectors, as long as they don’t intend to resell their comic books, shouldn’t worry too much about putting their books in plastic sleeves with cardboard to preserve them.

“If you have kids or pets in the house, it doesn’t hurt, but if you’re just reading for entertainment you really don’t have to worry about it,” Watts said.

Share
Enjoy a limted number of articles over the next 30 days
Subscribe Today
Log In
Subscribed, but don't have a login?
Activate your digital access.
Join the Conversation
To find out more about Facebook commenting please read the
Conversation Guidelines and FAQs