Jordan August and Phil Chorney say Baltimore, back in its post-WWII days, was one of the  places to  be  for bluegrass music on the east coast.

The co-founders of the Charm City Folk & Bluegrass Festival say millennial bands like the Avett Brothers have made banjo "cool again."(Photo: Kevin Grall)

Jordan August and Phil Chorney say Baltimore, back in its post-WWII days, was one of the  places to  be  for bluegrass music on the east coast.

"It was big in southeast and southwest Pennsylvania, northern Virginia and D.C.," Chorney said recently.

He explained that Charm City and the surrounding area had, at that time, a lot of mills and factory workers -- and so, bluegrass fans.

But as time danced on, he said, bluegrass went underground in Baltimore.

"There were a lot of families in Baltimore that got  together and  jammed," he  said. "But it was disorganized. There was no anchor for  it.

"There was no outlet for these people to play and there were some incredible musicians who lived in the area."

So, four years ago, August and Chorney decided to bring bluegrass in Baltimore back into the sunlight. The result was the Charm City Folk and Bluegrass Festival.

The annual one-day event returns to Druid Hill Park, which also encompasses the Howard Peters Rawlings Conservatory and Botanic Gardens, a beneficiary of the festival proceeds, on April 30. 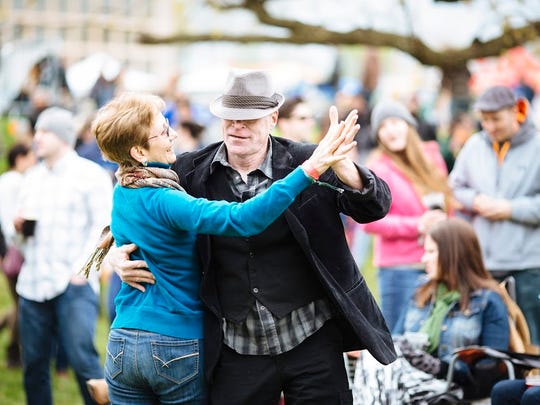 So, here are five reasons you should head south on I-83 to the self-proclaimed "Greatest City in America" for the Fourth Charm City Folk and Bluegrass Festival.

1. It's "family friendly," the co-founders say, even when times are tense in Baltimore. The 2015 riots, which were in response to the police-related death of Freddie Gray, were "literally blocks from the entrance to  our event," Chorney said.

While the riots closed I-83 during the festival, over 3,000 people still attended, Chorney and August said.

"It wasn't a problem and there were no issues," they said.

2. Banjos. Who doesn't like banjos? A lot of people. But millennial bands such as two-time Grammy winner Mumford and Sons and The Avett Brothers "have made banjo cool again," Chorney said. There will be a lot of banjos at the festival.

3. The Bluegrass Academy. A new offering this year that lets festival goers get tips and free "micro" music lessons from some of the performers.

"You could get some mandolin tips from Sierra Hull or a banjo lesson from Rob McCoury," Chorney said.

5. Music, not money. "A lot of bluegrass festivals are run by huge conglomerates," August said. "For us, it's more of a heritage thing."

"It's where our heart and soul is," Chorney said.

What: The fourth annual Charm City Folk and Bluegrass Festival.

Performers: On the WAMU stage --  Ricky Skaggs and Kentucky Thunder; Keller Williams and the Travelin' McCourys; Steep Canyon Rangers; Sierra Hull; and Ampersand Stringband. On the Union Craft Brewing and The 8X10 stage -- Cabinet; Cris Jacobs; Colebrook Road; and Man About a Horse.

Tickets: VIP tickets are sold out. Advance general admission tickets remain available from various on-line sites for $57. Tickets may be available at the gate on event day for $67. Children under 10 are admitted free.

Parking: On-site provided by Baltimore city, $10 per vehicle; Public transportation is encouraged; New Uber users can use the code “keyeg” to get a $20 credit towards a first ride.

Prohibited: Pets; fireworks; all weapons; outside food or beverages; coolers; and illegal drugs.