Fried Oreos, carnival rides and goats are all part of the 93rd annual South Mountain Fair, which runs through... 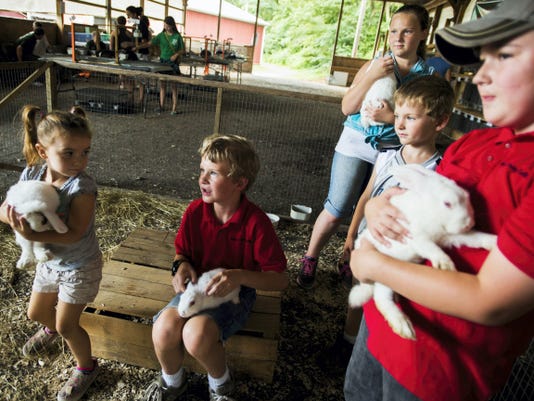 Fried Oreos, carnival rides and goats are all part of the 93rd annual South Mountain Fair, which runs through Saturday.

The weather may have detracted some from getting out to the Arendtsville-area carnival grounds on Wednesday, but it wasn't a concern for Abigail Hess.

Hess has gone to the fair every year since she moved to Biglerville about 15 years ago, she said. Her motivation for going this year was to see her 13-year-old son Daniel partake in the goat judging competition, she said.

"He was concerned about it maybe raining and throwing him out of a routine, but I said, 'Daniel, you can't worry about that. Just go out and do what you've worked hard at doing,'" Hess said. "It turned out to not even rain either; the clouds have been a nice cover."

The goat and sheep judging competitions are a staple of the fair, Hess said. People of all ages bring their goats and sheep to get judged based on posture, width and poses, she said.

"It's a little goofy if you've never seen it before, but it actually does take a lot of work to train the animals," she said. "And, as you can see, people take to it. There's a crowd watching it."

Daniel's goat was the runner-up in its category during Wednesday's judging.

Some of the folks who weren't watching the goat and sheep competition were enjoying carnival rides.

Thomas Kellerman was watching his 4-year-old son spin around in a circle on a mechanical swing.

"He has a stronger stomach than I do," Kellerman said with a laughed.

Kellerman, who grew up in Gettysburg and still lives there now, has been going to the fair for more than 30 years, he said. This is the second year he took his son, he said.

"He really enjoyed it last year because he got to see all the animals," Kellerman said.