Love is in the air at the Eisenhower National Historic Site. A World War II-themed wedding ceremony is planned for an... 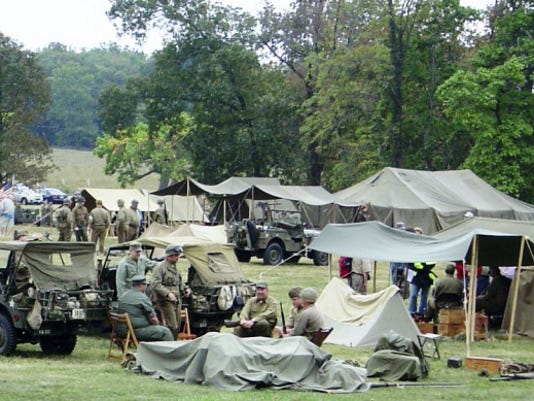 Living history re-enactors set up camp at the World War II Weekend in 2014 at the Eisenhower National Historic Site.(Photo: Submitted)

Love is in the air at the Eisenhower National Historic Site.

There have been staged wedding ceremonies in the past, but this is the first time a ceremony will take place during the weekend-long event, Wilson said.

The couple will be married on the site of the 83rd infantry Division living history camp Sunday afternoon, she said. Seats will be reserved for close friends and relatives, but the public is welcomed to stand in, she said.

It's a good opportunity for everyone, not just history buffs, to feel involved, Wilson said.

"History is good because there is no age limit, that's the point of history," Wilson said.

World War II weekend is supposed to be an interactive experience Wilson said. All participants are encouraged to talk to authors and historians and participate in activities.

One of the most popular events is the United Service Organization dance at the Gettysburg National Military Park Museum and Visitor Center. The dance, which goes from 7:30 to 10:30 p.m. Sept. 19, will feature '40s-styled music from the Gettysburg Big Band and tickets will be sold at the door for $10, Wilson said.

About 350 people are expected to attend, she said.

World War II weekend has been held for about 15 years, Wilson said, and more people seem to come from out of town every year.

"Every year it starts getting larger. Typically we have 3,000 visitors for this weekend," she said. "During our peak summer hours, we get maybe 300 visitors a weekend, so this is a big weekend for us."

Parking: Buses depart from the Gettysburg National Military Park Museum and Visitor Center located at 1195 Baltimore Pike. Weather permitting, on-site parking for cars will also be available in a farm field accessible off of Emmitsburg Road

More: Additional information can be found at www.nps.gov/eise