How to get your kid started in ice hockey

How to get your kid started in ice hockey

Find out how to get your kid ready for the ice.(Photo: Photo courtesy of USA Hockey)

Are wintry weather and cabin fever making your kids cuckoo-crazy? This weekend, get your young ones out of the house and let them burn up some energy on a hockey rink.

This Saturday, Feb. 20, kids can Try Hockey For Free at ice rinks around the country as part of Hockey Weekend Across America. Local rinks will host hour-long events for kids ages 4 to 9 who want try youth hockey.

Local hockey clubs and rinks will provide skates and some loaner equipment, and kids should be able to skate without assistance. Registration is open online at tryhockeyforfree.com.

Ed Rigling of New Cumberland, president of the Capital City Vipers hockey club in Harrisburg, and Rick Lefever of York president of the York Ice Hockey Club, answered a few questions about getting a child started in ice hockey.

No one in my family plays hockey, but my kid says he wants to be the next Malkin. Where do I start? (Also, what is a “Malkin”?)

All area rinks offer Learn to Play Hockey and Introduction to Hockey classes. Recreational and developmental hockey leagues provide coaching in skating and stick skills, allowing kids to progress at their own speed while learning the rules of the game.

When it comes to new hockey players, coaches have realistic expectations.

“Most kids don’t fully come into their hockey skills until they are in their teens,” Rigling said. “If kids are just starting off, they probably aren’t going to go tearing out onto the ice. If kids are having fun, they will want to develop as players. Eventually, the skills will come.”

(And “Malkin” is Evgeni Malkin, a hockey player for the Pittsburgh Penguins. Easy there, hot shot. For now, just keep working on your back crossovers.) Where to ice skate outdoors in York County

My child isn’t the best skater. Can she still play ice hockey?

“Kids in the 4 to 8 age group should be able to move on skates and show good balance,” Lefever said.  “Kids 9 and up should have better control with stopping and skating backwards.”

“On public sessions, kids do things on skates without being told to,” Lefever said. “Once they can skate, they can play the game.”

Ice sports are expensive. Will I have to mortgage my house to pay for hockey equipment?

“Most clubs hold swap meets or offer equipment exchanges,” Rigling said. “Kids don’t need to worry about stick flex ratings or high-performance skates for a while.”

Many rinks will also offer some rental equipment to get kids started.

As children progress beyond the basics, equipment should match his or her skill level. Local hockey shops want to earn your trust and your repeat business, so they won’t “over boot” your kiddo with higher-rated skates than she needs, but professional staff will also make sure equipment fits safely. 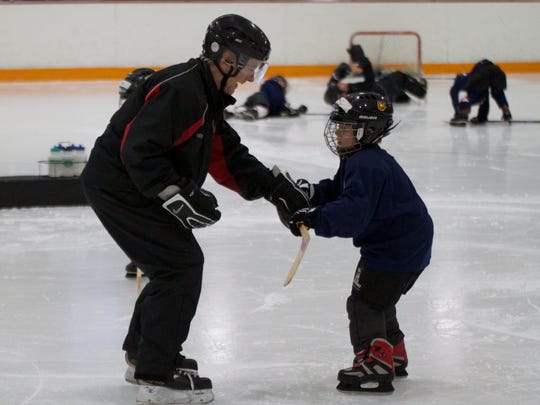 Your child should feel comfortable on ice skates before playing. (Photo: Photo courtesy of USA Hockey)

Hockey, like all youth sports, is under constant scrutiny and reexamination when it comes to injury prevention.

“Checking leagues used to start at 10 years old. Now checking doesn’t take effect until age 13,” Lefever said. “Kids are taught skating skills and the correct way to check. Most programs won’t put a kid onto a checking team until the child is ready.”

Every year, improvements are made in protective equipment, and USA Hockey coaching clinics emphasize keeping players healthy so they can play hockey into adulthood.

If my child plays ice hockey, does that mean I’ll live in a refrigerator year-round?

Don’t knock ice rinks! Spending time in the cold has a kind of youth-preserving effect, like being cryogenically frozen in small, daily amounts. But both Rigling and Lefever agreed that time off-ice is encouraged so kid don’t burn out.

And if your little Wayne Gretzky is begging to practice hockey skills in July, a pair of roller blades and a cardboard shooting mat means he can soak up some vitamin D while perfecting his stick handling.

Locally, you could register online for USA Hockey’s Try Hockey For Free at tryhockeyforfree.com.