You could see the Final Five in Hershey this fall

You could see the Final Five in Hershey this fall

A USA TODAY motion graphic explaining why U.S. gymnast Simone Biles is leaps and bounds better than the rest. 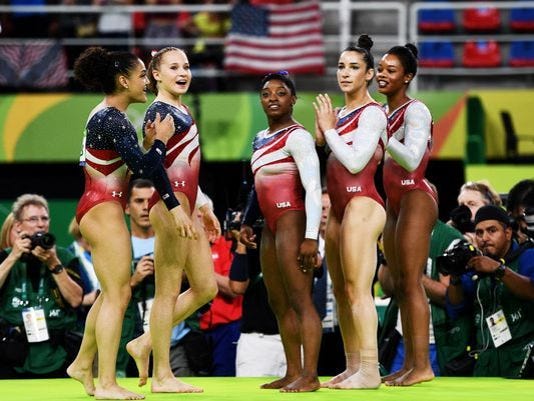 The Final Five will join the cast of the 2016 Kellogg's Tour of Gymnastics Champions, which makes a stop in Hershey on Oct. 25.(Photo: David Ramos, Getty Images)

Since winning Olympic gold, the U.S. Women’s Gymnastics Team has played “Hungry Hungry Humans” with Jimmy Fallon on “The Tonight Show,” seen “Hamilton” on Broadway and shared the stage with Beyonce at the VMAs.

And now, the Final Five is adding a 36-city Kellogg’s Tour of Gymnastics Champions to the list.

The tour, which is a celebration of the team’s success in Rio, will stop at the Giant Center in Hershey on Tuesday, Oct. 25, according to a news release.

"Weird Al" Yankovic breaks down the art of parody

The 7 p.m. show will give audiences a chance to see elite gymnastics skill and modern performance art up close.

The cast will vary from stop to stop and will also include local gymnasts at each show.

'The Book of Mormon' comes to Hershey this fall