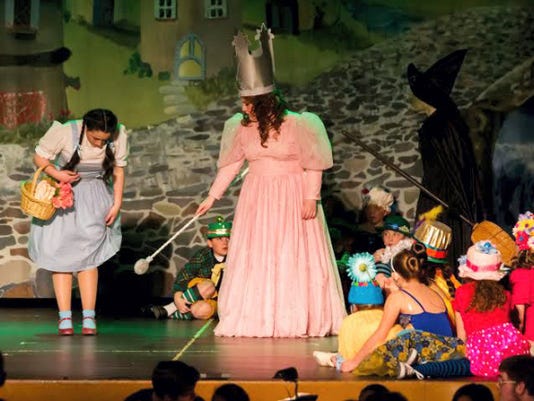 Cast members from Northeastern High School in Manchester will perform a selection from "The Wizard of Oz" during the Encore high school musical showcase April 19.(Photo: Submitted)

On Sunday afternoon, cast members from 13 different high school plays will do their hair and makeup, put on their costumes and take the stage one last time before the official end to the spring musical season.

"I've had students tell me this is their favorite day of the year," Encore artistic director Lyn Bergdoll said. "They can't get around to see every production because a lot of them happen on the same weekend. So, this is a way they can see something from other schools."

Each high school will have the chance to perform an eight-minute selection from their musicals, she said. Audiences can expect to see a good mix of the classics like Dallastown Area High School's "Anything Goes" and more unfamiliar productions like Kennard-Dale High School's "Sweet Charity" or Hanover Senior High School's "Sunset Boulevard."

Bergdoll said she doesn't think a York County high school has ever done "Sunset Boulevard" before.

One of the more recognizable performances will be Northeastern High School's "Wizard of Oz." The cast will perform two classic numbers from the musical, "Over the Rainbow" and "King of the Forest," according to director John Marrs.

The 50 fourth and fifth graders that Marrs cast to play the munchkins won't make it to Encore, he said. But the audience can expect to see a special appearance from Lily, a Yorkie who made her acting debut as Toto this year. Sophomore Lauren Bass will play Dorothy in both scenes.

Other musicals audiences might recognize are Central York's "Peter Pan" and Eastern York's "Mary Poppins." Both productions used equipment that allowed their actors to fly across the stage, but that technology won't be available during Encore, Bergdoll said.

To conclude the performances and close out the season, four representatives from each school will perform the finale number "On Broadway" together on stage.

"For many of them, it's like the ultimate for them to be there with the cream of the crop and be a part of that one last number," Marrs said. "It's really a neat thing."

Before the night ends, scholarship and award winners will be announced. Encore is more than just performances, Bergdoll said. It's also a competition.

Each director will also give out individual awards to their own cast members.

"It really puts the event at a new level," Bergdoll said.

Scholarship winners will be announced Sunday.

South Western High School: "How to Succeed in Business Without Really Trying"

York Catholic: "Annie Get Your Gun"

York Suburban High School: "Once Upon a Mattress"