York hip hop, pop and R&B duo Co-Star is all about "good vibes." At least, that's what singer Joey Mator said. And as... 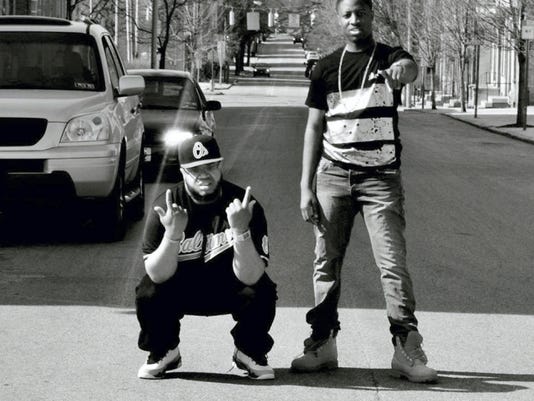 York hip hop, pop and R&B duo Co-Star is all about "good vibes."

At least, that's what singer Joey Mator said. And as Mator and rapper Denzel Thompson bobbed their heads to their latest single with big smiles on their faces, it appeared to be true.

"(People) love the fact that we have good energy," Mator said on a recent Tuesday afternoon. "We like to be positive. When we get together, we like to be all laughs."

"We know how to party," Thompson added.

This idea of being positive is so important to Co-Star that the duo decided to write a song about it.

"In Here," which released April 23, is a feel-good song about letting only positive energy in their lives, Mator said.

He described Co-Star's high-energy music as a mix between Chris Brown, Drake and rhythmic music. Mator and Thompson write both love songs and "summertime music" that you can dance to, Mator said.

Co-Star, which got its name from the idea that one person is not the star of their show, formed in 2011. The two class clowns, as they described themselves, met at Central York High School, where they got their start making music in a music production class.

Since 2011, they released two projects, including their debut album "Director's Cut," and played more than 200 shows. Co-Star has performed at local venues like Valencia Ballroom and The Shop at New Grounds Roasting Company as well as the Liberian Entertainment Awards in Maryland, Mator said.

But it wasn't until the last two years, when Mator became a father and Thompson became an uncle, that the duo decided they had to step it up. In that time, they worked in Mator's basement studio about three times a week and recorded 150 songs on top of Thompson's day job at Syncreon and Mator's job at Auntie Anne's corporate in Lancaster. Of the 150 songs, Mator said Co-Star plans to release about 25 in upcoming projects and give 10 to 15 to other artists.

"Our hunger and passion in music changed because we have a lot we're fighting for," Mator said. "What we're trying to do now is on a whole other level."

Now, Co-Star is preparing to release its first 12-track EP "God Speed" in the fall and plans to begin touring by the end of the year. "In Here" is the first single from that EP.

"God Speed" is about the frustration Co-Star has experienced with trying to become mainstream, Mator said.

"It's basically recognizing that everything doesn't happen when you want it to happen," Thompson said. "Not losing faith, but have faith that it's going to happen in God's time."

The main goal for Co-Star is to eventually do music full-time so they can show people that you don't have to go to college and get a desk job to live the dream, Mator said. But for now, Co-Star is taking its career one step at a time.

"The time is coming, and our success will occur at God's speed."

What: Co-Star's new single "In Here"

When: The single will be released April 23