With pretty pink flower crowns sitting on top of their now silver curls, Peg and Delma Welch counted how many times... 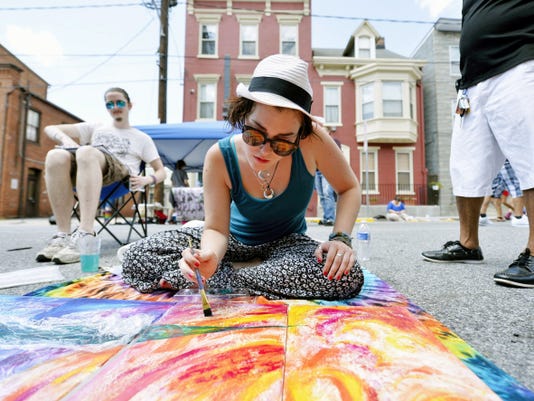 Faith Reisinger of Carlisle works on a painting for The Parliament Arts Organization during Equality Fest Sunday, Aug. 2, 2015. The second annual Equality Fest, held in the 100 block of East King Street in York, featured a vow renewal ceremony and a wedding expo in the Bond Building, as well as music, crafts, food and games. The festival, which was inspired last year by the legalization of gay marriage in Pennsylvania, is designed to celebrate the diversity of Pennsylvania and York residents.(Photo: Chris Dunn &#8212; Daily Record&#47;Sunday News)

The first time was in 1993 in Washington, D.C., where with 5,000 of their "closest friends," the two pledged their love to one another in what was considered an act of civil disobedience. In 2004, they would make the trip to Toronto where same-sex marriage had become legal, and they would again vow their lives to the other.

In 2013, the women drove to Norristown when Montgomery County Register of Wills D. Bruce Hanes handed out more than 170 marriage licenses to same-sex couples.

In their York living room, the Peg and Delma Welch were the ninth couple in Pennsylvania to be legally married. It had been a long 24 years of waiting for that moment.

As they stood before a crowded reception at The Bond in Royal Square Sunday, Peg and Delma, along with two heterosexual couples, renewed their vows during the second Equality Fest.

Equality Fest started last year in a different part of the city, nestled in Cherry Lane Park, where people of every race, religion or sexual orientation gathered to celebrate their diversity. This year, the event grew, forcing organizers to find a bigger space in the Royal Square neighborhood.

Wedding vendors showcased their goods in The Bond while the three couples renewed their vows. The one couple set to get married Sunday didn't show up for the event, but their absence didn't hinder the celebration.

Instead, speakers highlighted the great strides in civil rights movements that have been made — most recently, the Supreme Court decision to legalize gay marriage. The decision requires all states to issue marriage licenses to same-sex couples and to recognize same-sex marriages from other states.

But more needs to be done, especially in Pennsylvania, organizers of Equality Fest said.

It's tough to talk about the success of civil rights movements when there's still a lot to do, said Rep. Brian Sims, D-Philadelphia, who spoke before the vow renewal ceremony. In Pennsylvania, the LGBT community is not protected the same as everyone else, he said. Those celebrating the event Sunday could be fired from their jobs Monday, or evicted from their apartments without consequence, he said.

Dr. Rachel Levine, the state's new Physician General who has been outspoken about being transgender, said it is "unacceptable" that so many LGBT people still don't feel safe.

"We need to make a commitment to each other that we're not done with this process," she said.

For Peg and Delma Welch, the issues surrounding LGBT civil rights are ones they often speak out about.

Delma Welch has asked every employer she's had for the past 25 years to create an antidiscrimination clause for sexual orientation and gender identity.

There are still people out there who are scared of the LGBT movement, Delma Welch said, and people who don't agree with same-sex marriage.

But the women believe that proudly living their lives and being outspoken about their beliefs is the best way for them to try to change the minds of those who are opposed.

"Just talking about my wife, because that's what she is, is something I'm doing to help," Peg Welch said.

"Just being who we are is something huge."