Hundreds of locals were eager to learn the truth behind the Hex Murder of 1928 at a "Hex Hollow" documentary screening in York Saturday. 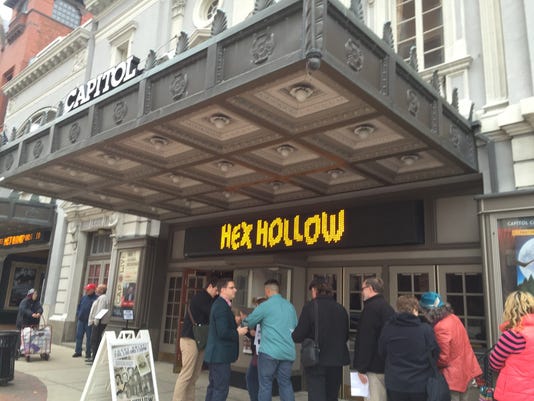 A line forms outside of the Strand-Capitol Theater on Saturday, Nov. 7, 2015 for a screening of the documentary “Hex Hollow: Witchcraft and Murder in Pennsylvania.”(Photo: Abbey Zelko - FlipSidePA)Buy Photo

By noon on Saturday, close to two dozen people were already lined up on the sidewalk outside of the Strand-Capitol Theatre in York.

It was still a full two hours before the first screening of the documentary “Hex Hollow: Witchcraft and Murder in Pennsylvania” would begin, but with three sold-out shows scheduled for the day, movie-goers knew they had to come early if they wanted a good seat.

The film, made by West Manchester Township native Shane Free, promised to tell the story of what happened on the night of the famous Hex Murder that brought national attention to York County, and what followed in the years after. Several who attended the 2 p.m. showing said they had heard the story as children either from their teachers at school or passed down from their parents.

They knew that on Nov. 28, 1928, a powwow doctor named Nelson Rehmeyer was murdered in his southern York County home by a man named John Blymire and two accomplices who claimed Rehmeyer had hexed them.

And they knew that the house where it all happened still stands today.

An audience at the Strand-Capitol Theater on Saturday, Nov. 7, 2015 awaits a screening of the documentary “Hex Hollow: Witchcraft and Murder in Pennsylvania.” (Photo: Abbey Zelko - FlipSidePA)

“When we were kids, we used to drive by (Rehmeyer’s house),” Nancy Bodell, 59, of Spring Garden Township, recalled. “That was the thing to do.”

She remembers the house being “dark and scary and eerie,” she said, especially around Halloween.

But over the years, Ring said she’s heard so many different versions of what truly happened in that house – from blood running down the walls to people hanging in nooses – that she couldn’t keep track of what was fact and what was fiction anymore.

“I’d like to know the real story because by the time things get translated, it’s completely different from what I read in the book (about the murder),” she said.

Bodell agreed. Years ago, she found out her family was related to the Blymire’s, but even with that personal connection, she said she didn’t think she’d ever heard the whole story.

“I just want to know what happened,” she said.

After the 75-minute film ended, attendees agreed they got what they were looking for.

“(We) wanted to hear the truth, and that’s what we got to hear,” Nick Root, of North Hopewell Township, said. “Nelson was not a witch, and John was screwed up in the head. I hope more people get to find out what happened.”

Free said one of the main points of the film was to establish that powwow – the protective and healing art that Rehmeyer practiced – is not generally used for witchcraft.

“It was interesting to see … how ingrained (powwow) is in Pennsylvania Dutch culture, and that it’s still practiced today,” Ring said after the film.

But for some, the most surprising finding was that the Blymire family believes John could have been involved in another murder prior to Rehmeyer, but he was never formally charged.

“That was new information,” Root said. 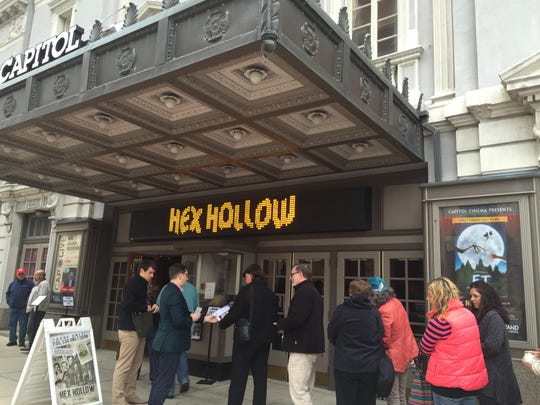 A line forms outside of the Strand-Capitol Theater on Saturday, Nov. 7, 2015 for a screening of the documentary “Hex Hollow: Witchcraft and Murder in Pennsylvania.” (Photo: Abbey Zelko - FlipSidePA)

Free, who released his first full-length documentary “Investigating The Afterlife” in 2008, said this was the first time he’d shown one of his films to hundreds of people at one time.

“It’s exciting and humbling to know everyone was so interested in this story,” Free said. “There was a need for this story to be told, and I’m glad I was the one to be able to do it.”

After the screenings Saturday, Free said he plans to show the film at film festivals in early 2016 and release the film on DVD by mid-summer.