Find out how York's Martin Library is celebrating 100 years

The library will celebrate its 100th birthday in several ways, including host of a masquerade ball.

Find out how York's Martin Library is celebrating 100 years

The library will celebrate its 100th birthday in several ways, including host of a masquerade ball.

Artist Joe Kull works on some song lyrics on a laptop Thursday, Feb. 18, 2016, at Martin Library. The library, which is the main branch for York County Libraries, is celebrating its centennial this year.(Photo: Chris Dunn, York Daily Record)Buy Photo

One of York's most recognizable institutions will be celebrating its 100th birthday in grand style this year.

Martin Library, located at the corner of East Market Street and North Queen Street, has seen a lot of changes since the Martin Library Association was created in 1916.

This organization has always had an eye on innovation and what's happening next," said Laura O'Grady, the director of development for York County Libraries. "What makes this library unique is that it tries to stay ahead of the curve to meet the needs of not only the people now using the library but also the people who will need our services one day."

It took nearly 20 years before the Martin Library Association was able to actually open a physical public library in 1935, she said. Now there are 68,000 Martin Library cardholders, O'Grady said, with 36,000 visitors every month.

Since then, the library opened its children's wing in 1955, opened up the second-floor in 1987 and, in 2005, purchased the brownstone building next to the original location to expand its services even further, she said. The second floor houses a computer room that logs 213,000 sessions per year. 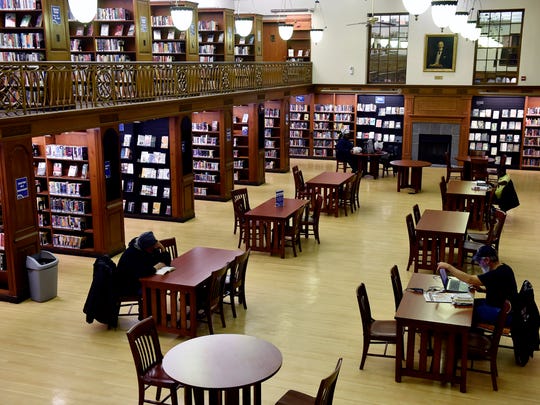 The reading room is shown Thursday, Feb. 18, 2016, at Martin Library. The library, which is the main branch for York County Libraries, is celebrating its centennial this year. (Photo: Chris Dunn, York Daily Record)

"We were one of the first libraries to make free Internet available and even put it into our children's library," O'Grady said.

The library does outreach to various nonprofit, municipal and educational institutions in various ways, including providing its media library services to York Academy Regional Charter School.

Through it all, the history remains.

Patrons walk in through the main doors at 159 E. Market Street surrounded by a facade of 13-inch bricks salvaged from the 1770s, according to a news release, and then walk across plank wood floors of the main reading room that were hand-carved right here in York to settle down with a good book or work on their laptops.

Martin Library will march forward as a participant in the Old York Street Fair on May 8. There, the library will put on three hip-hop performances throughout the day to celebrate active literacy. 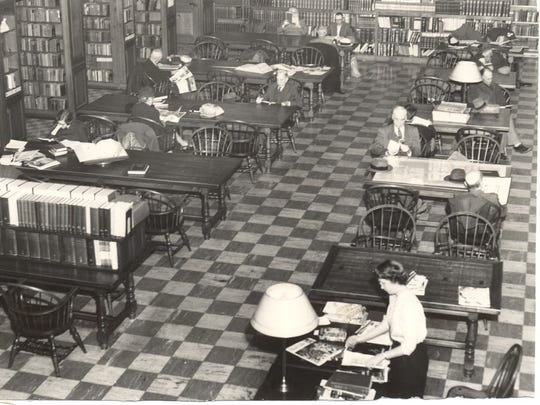 The main reading room of Martin Library in York is largely the same as it was when the library first opened its doors in the 1930s. (Photo: Submitted)

"The official theme is 'On Your Mark, Get Set, Read,' so it's an active take on summer reading club," O'Grady said.

Its employees also lobbied successfully to host what an information statement describes as "one of the most trendsetting events of the calendar year" — the annual Downtown Inc Masquerade Ball on Oct. 29.

Last year the ball was at the marketplace at the corner Penn and Market streets in York and the year before at an old, ornate post office in the city, she said. But the unique shape of the library, with no real space for a traditional dining set up separate from a dance floor, will make this year's set up a little different.

Attendees, dressed to the nines and topped off with masquerade masks, will eat at their own pace, Evans said, at high-top tables to allow more room for dancing to the music provided by a regional DJ group Aortic Valve. 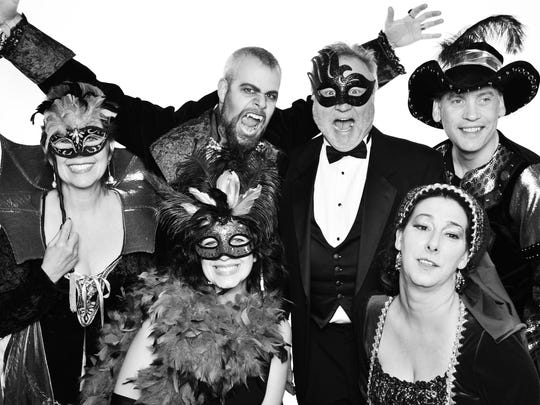 Attendees to the 2015 masquerade ball pose in their costumes for a photo at the Mint Photo Booth. The booth will return for the 2016 ball. (Photo: Courtesy of Downtown Inc)

"The thing I really love about the Masquerade Ball is that we reuse these old spaces," Evans said.

In years past, the ball has sold out with about 300 attendees but she said that Downtown Inc hopes for a greater turnout because of the extra space provided by the multi-leveled venue.

The ball and parade are just the events with dates "set in stone," O'Grady said. The library's official birthday celebration, geared toward children and families, will take place sometime in November.

The library welcomes those who want to share their library stories to use the hashtag #Martin100 on social media.

"The interesting thing to me, and I've been here for five years in different roles, is Martin Library's dedication to giving to the community," O'Grady said. "We are unwaveringly dedicated to the people who use our services."