Get your green out. St. Patrick's Day is almost here.

6-year-old Adam Loucks, right, along with his grandmother Donna Loucks and his cousin Chase Curry, 7, are all decked out in their Irish best as they watch the St. Patrick's Day Parade on Saturday, March 17, 2012. Jason Plotkin, York Daily Record
Fullscreen

It was a whole new take on "Kiss Me, I'm Irish" as Pucci, left, gets one laid on her by Jinx, as the two dogs are decked out in their greens for Saturday's St. Patrick's Day Parade. Jason Plotkin, York Daily Record
Fullscreen

The cancellation of the St. Patrick's Day parade did not dampen the spirit of Sean Stone, left, and his brother Nathan, as the duo from Manchester celebrated in green at the Harp & Fiddle on Saturday, March 17, 2007. Jason Plotkin, York Daily Record
Fullscreen

Pat Wilson of Balloons Instead blows up balloons in preparation for the York St. Patrick's Day Parade Wednesday, March 14, 2012. The increasing price and scarcity of helium forced creativity with balloons. This year a pole with air filled balloons on top will be at each parking meter along the parade route. Kate Penn, YORK DAILY RECORD
Fullscreen

Nick Ryan shows the pogo stick he used in the York St. Patrick's Day parade from 10-years-ago that he still stores in his parent's Spring Garden Township home on Tuesday, Dec. 24, 2013. Ryan is the CEO of Xpgo, an extreme pogo sport and compeition that has taken him around the world. Jason Plotkin - York Daily Recor
Fullscreen

Calvert Arms Fife & Drum Corps member Nate Valentine wears a boxwood sprig in his cap as he plays the fife before participating in the 31st annual York St. Patrick's Day Parade on Saturday, March 15, 2014. Members of the Irish Brigade at the Civil War battle of Fredericksburg wore boxwood sprigs in order to have some green in their uniform. The 31st annual York St. Patrick's Day Parade featured 84 registrants -- including several marching bands and four Irish dancing groups -- that traveled east on Market Street from Penn Street to Duke Street in York on Saturday, March 15, 2014. Chris Dunn, York Daily Record
Fullscreen 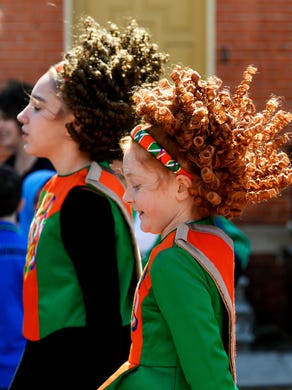 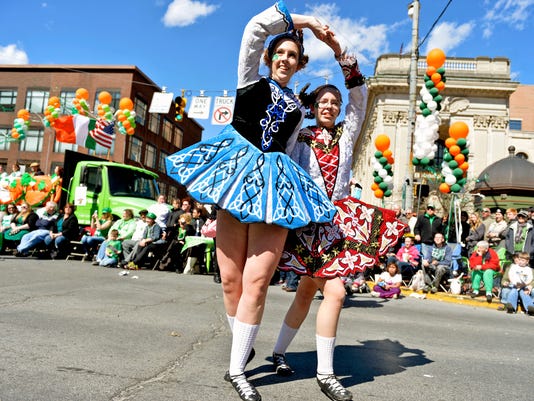 Get your green out. St. Patrick's Day is almost here.

For the last 33 years, York has celebrated the holiday with a parade downtown, and this year is no exception.

On Saturday, March 12, about 90 entries – including bands, dancers, floats and more – will march through Continental Square. The parade steps off at 1 p.m. from Market and Penn streets and proceeds east on Market to Duke Street.

Here are a few entries to watch for if you go.

If you’ve been to the York Saint Patrick’s Day Parade in the last several decades, you’ve probably seen the Walsh clan. The Irish family – led by York Catholic High School graduate Ward Walsh – first walked in the parade 33 years ago with just a poster board and their dog Molly, dyed green for the occasion. Since then, they’ve upped their game, adding close to 30 family members and an Irish cottage float to their entry.

This year, the Walsh clan is stepping up even further by bringing nearly 50 family members from across the country to York to walk alongside their newly updated float. Formerly built of cardboard, this year’s float will be a more permanent structure made of wood with a stone façade and thatched roof, Ward’s daughter Mieke Driscoll said.

The float will ride behind Ward Walsh, who will lead the parade as this year’s grand marshal.

All of the Irish dancers

You can’t have a St. Patrick’s Day Parade without Irish dance. This year’s parade will have more dance groups than ever before, organizer Mary Yeaple said.

New to the parade is the Lancaster-based Paloma School of Irish Dance. The school became certified in May and now has about 25 students, including 9-year-old Mid-Atlantic Regional Irish Dance champion Isaiah Pujol and 17-year-old Christy Martin who plays the fiddle while she dances.

Make sure to come downtown early to see complete performances from the dancers during the pre-parade entertainment, which starts at 11:15 a.m.

Every year, St. Patrick’s School involves the entire student body from preschool to sixth grade in a project to build a Saint Patrick’s Day float. And every year, it’s elaborate and different, Yeaple said.

This year’s float is called “A Litany of Irish Saints.” Students will write and decorate prayers to Irish saints Patrick and Bridget and attach them to the float in a way that looks like the prayers are going up to heaven, parent volunteer Elisa Cialini said. Clouds will line the sides of the float, and students will dress up as Saint Patrick and Saint Bridget and sing a song.

When it’s done, it will look like an Irish heaven, Cialini said.

A York Water Company float will be a new addition to the parade this year.

To celebrate its 200th anniversary, the company has created a replica scene of boring out the logs used to install York’s first wooden pipes in 1816. Representatives from the company will also dress up in period costumes, York Water Company president Jeff Hines said.

“We just wanted to let people know about the 200th anniversary,” he said. “And to throw Smarties into the crowd.” 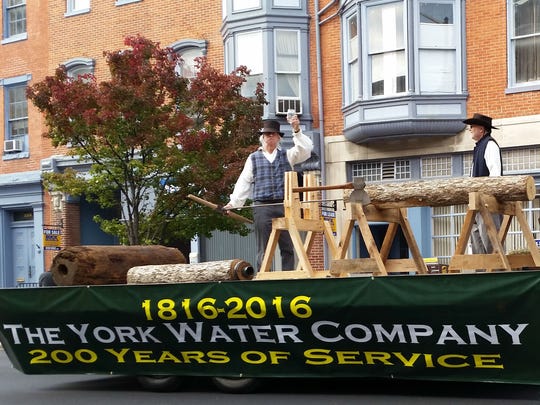 Where: The parade will step off from Market and Penn streets and proceed east on Market to Duke Street in downtown York.

Note: Bicycles, roller blades, skateboards and dogs are prohibited on the parade route.

The following streets will be closed until the end of the parade.