I-ron-ic owner David Smith dressed up like Willy Wonka for this photo to announce the release of 275 golden tickets hidden in 3,000 Wolfgang candy bars. Golden ticket winners will be invited to a barbecue dinner to celebrate York's 275th birthday this summer.(Photo: Submitted)

York is celebrating its 275th birthday this summer, and you’re invited … if you can find one of 275 golden tickets hidden throughout the city.

Hidden in 275 of those bars are golden tickets, good for admission for you and a guest to York’s 275th Birthday Bash in the WeCo neighborhood July 23. Golden tickets will include instructions on how to claim your seat at the bash, which will bring together more than 550 members of the community to share a meal at one long table in the center of West Market Street, Smith said.

The sit-down barbecue chicken dinner, provided by the York Rescue Mission, will also include birthday cake and family-friendly entertainment, such as magicians, jugglers and street musicians, starting at 1 p.m. The event will run rain or shine.

If you want to be one of the lucky 275 singing “I’ve got a golden ticket,” Smith suggests purchasing candy bars as soon as possible.

“You can look until they’re all gone,” he said. “I’m hoping they go quick.”

Candy bars are now for sale at the following confirmed locations:

The idea is to keep prices low and give everyone a chance to attend the birthday bash, Smith said, adding the that the event will be funded by a grant from the Cultural Alliance of York County and sponsors, including York Water Company and Better York.

The golden ticket idea also serves as a way to draw more people to downtown York shops, he said.

“(The idea) was created to get people to go in these stores in WeCo and the Market District and Royal Square,” Smith said. “I’m trying to get more people into our merchants.” 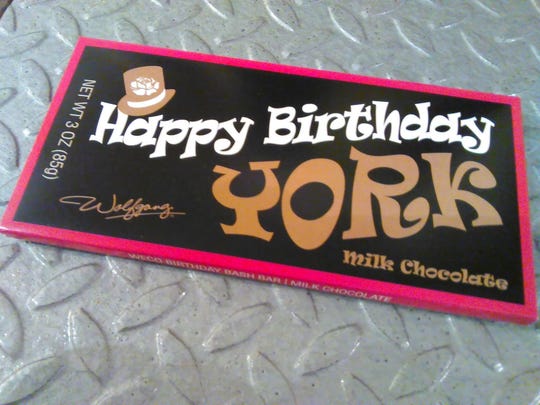 Three thousand of these Wolfgang chocolate bars are now for sale at dozens of participating shops in downtown York. Hidden in 275 of the bars are golden tickets, good for admission to York's 275th birthday bash this summer. (Photo: Submitted)