We've never seen a pedal car quite that big.

Tiffany Bookwalter, 14-months-old, of West York, is pulled along in a street rod themed wagon as her father BJ pulls her around the York Expo Center at the annual Street Rods Nationals East event on Saturday, June 4, 2016. Jason Plotkin, York Daily Record
Fullscreen

Thousands of colorful street rods, muscle cars and custom cars – each unique in their own way – filled the York Fairgrounds Saturday for Street Rod Nationals East.

So, when I set out to find some of the coolest vehicles at the 43rd annual show, I knew it wouldn’t be easy.

Throughout the day, I saw a green street rod covered in Kermit the Frog dolls, an Elvis-themed rat rod and more flames than I can count.

Here are a few of the coolest cars I spotted at the show. 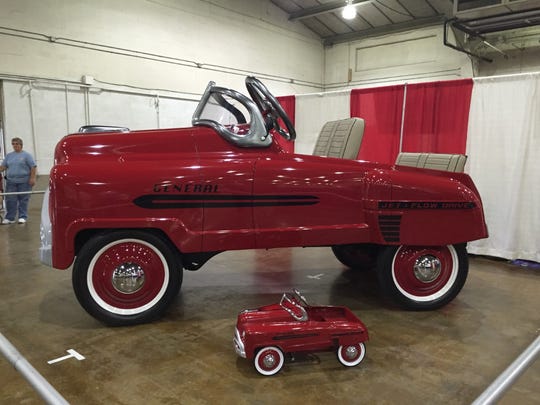 I've seen pedal cars, but never one quite this big. This General Jet Flow Drive pedal car – built by Daniel Hryhorcoff, of Scott Township – is five times the size of a typical pedal car, NSRA marketing director Jim Rowlett said. And believe it or not, it’s street legal. You just have to attach a smaller steering wheel before taking it out on the road, Rowlett said. 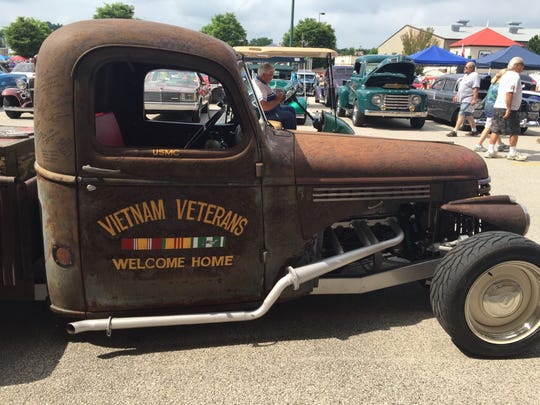 More than 1,000 signatures cover this 1946 Chevy truck, inscribed with the words “Vietnam Veterans, Welcome Home.” The goal is to get as many signatures from Vietnam veterans as possible and then auction it off at the end of the year to raise money for veterans' charities, veteran Mike Andrezzi, of Mantua, N.J. said.

“I decided I wanted to do something to give back, and I didn’t want people to forget what a sacrifice the Vietnam veterans made,” Andrezzi said.

The back of the tailgate is reserved for the names of fallen brothers and sisters, he said. 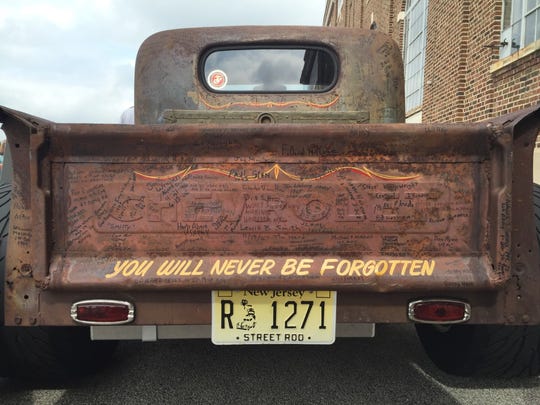 The tailgate of this 1946 Chevy truck includes the names of Vietnam War veterans who have lost their lives. (Photo: Abbey Zelko, FlipSidePA)

Dick and Terry Feile, of North Carolina, turned this 1948 Chevy Suburban into a taxi cab. The car was displayed at Street Rod Nationals East on June 4. (Photo: Abbey Zelko, FlipSidePA)

This 1948 Chevy-Surburban-turned-taxi-cab stays true to its theme even in the smallest of details. Dick Feile, of North Carolina, said his wife Terry bought it because she didn’t have enough room in her 1933 Ford Victoria for all of her shopping bags. And she decided to have a little fun with the theme. The car includes authentic New York City-issued medallions and a meter from the time period, Dick Feile said. And the light on the roof has his wife’s name on it.

“I get to clean it and chauffeur her around, and it’s like ‘Driving Miss Daisy,’” he said.

Quite a few rat rods caught my eye at Street Rod Nationals East, but none that went all out with the “rat” theme like this one. 81-year-old Johnny “The Rod Father” Brooks, of Prince Frederick, Md., built it using parts from 16 cars, two motorcycles and a boat. It has an engine from a 45-foot boat, a kickstand from an IronHorse motorcycle and a kickstart from a Yamaha motorcycle break, he said.

Brooks owns some nice street rods too, like a 1934 Pontiac Touring Sedan. But he said the rat rod is the one that always gets the most attention.

Probably because it’s decorated both on the exterior and interior with plastic rats. But if you look beyond that, you’ll see the inside does look a little fancy. It has a cd player, air conditioner, glass doorknobs from his grandmother’s house, a bar and even a chandelier inside. 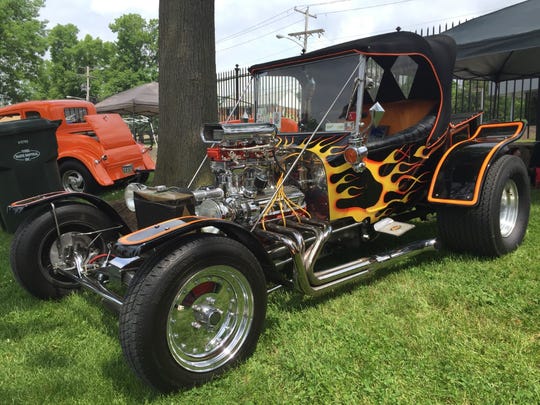 This 1923 Ford T-Bucket was one of the oldest vehicles at Street Rod Nationals East on June 4. (Photo: Abbey Zelko, FlipSidePA)