There are months when I ponder just how the older films selected for revival screenings are chosen. What makes them worthy of being shown? This month offers several titles that are just plain baffling. 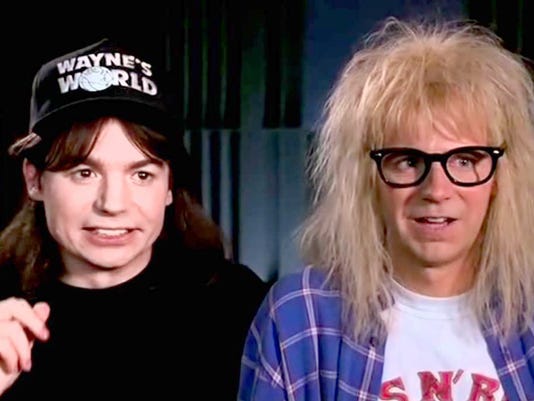 There are months when I ponder just how the older films selected for revival screenings are chosen. What makes them worthy of being shown? This month offers several titles that are just plain baffling. Take “Sixteen Candles” (1984, R), which kicks things off for Lititz’s Penn Cinema Monday Movies series on April 4 at 7 p.m. I was perhaps a tad too old to be interested in John Hughes’ film (he both wrote and directed) – or for that matter any of his teen comedies – at the time it was released. My appreciation has not grown in the intervening decades – for that matter I haven’t become fond of any of his movies, including his so-called adult comedies (I can die content if I never again have to sit through “Planes, Trains and Automobiles”). To be fair, the venue only dubs their offerings cult classics not classics and given how often Hughes’s productions are scheduled I have to assume there is an audience for them. In this case said audience must consist of those born in the 1970s who can’t give up the films they saw as teenagers and 20-somethings. I know of too many individuals who think the films they loved as adolescents are still swell.

This particular opus involves a young woman (Molly Ringwald) who suffers every possible indignity on her 16th birthday including everyone apparently having forgotten it even is her birthday thanks to the family being preoccupied with her sister‘s upcoming nuptials. She has a crush on the most popular boy in school while (horrors) the geekiest boy in school (Anthony Michael Hall) has a crush on her. Embarrassing grandparents and a foreign exchange student named Long Duk Dong (I am not making this up) add to what I am assured is a hilarious look at the journey into womanhood. I find it instructive that the only teen cast members who have achieved any career longevity – the Cusacks, John and Joan – have only the tiniest of parts while the others’ careers have vanished like camphor. If this is your cup of Darjeeling go quench your thirst.

The following week’s presentation is “Wayne’s World” (1992, PG-13), a film I have never seen (and I hope to keep my record clean). Mike Myers and Dana Carvey (speaking of vanished careers) portray the stoner lunkheads they created for “Saturday Night Live” who in this feature rendition have the opportunity to take their cable access show to a real TV station. Hilarity supposedly ensues partly because the station owner (Rob Lowe) makes the show slicker and more professional, losing its audience in the process. Pop culture satire bounds with everything from product placement to gratuitous sex in films being targeted at some point. As is common with these SNL derived features this is mostly a compilation of sketches barely held together by a tenuous plot. The Rotten Tomatoes consensus is that it’s “an oddball comedy that revels in its silliness” so maybe I’ve erred in passing it by. Life is too short to ascertain for certain.

I have seen “History of the World, Part I” (1981, R), playing on April 18, but so long ago I recall very little of it beyond thinking it wasn’t nearly so bad as everyone declared at the time of its release. Borscht Belt escapee Mel Brooks has done better films – in fact, he may have made his best ones with his first two, “The Producers” and “The Twelve Chairs.” This collection of vignettes looks in hit and miss fashion at everything from cave dweller days to the French Revolution and several other events along the way. There are some laughs – particularly in the Spanish Inquisition segment (as Monty Python can attest the Inquisition is always hilarious) – but not really enough of them to fill out the movie. Aside from the vulgarity nothing rises above the level of, say, a sketch on “The Carol Burnett Show.” Then there’s the Dom DeLuise factor. If you’re on Brooks’ wavelength (and can tolerate DeLuise) you’ll get more laughs out of this concoction. To be fair when the material is good it’s hysterical.

“Pitch Perfect” (2012, PG-13) is another film I have not seen but it was successful enough to spawn a sequel for whatever that’s worth. Per online synopses, it concerns a newly-arrived college student (Anna Kendrick) who joins the school’s all female singing group and revitalizes them with new repertoire so they can compete against a rival all-male group. I can guess the outcome sight unseen but I’ll grant that I’ve seen Kendrick in a few productions and she’s an appealing screen presence if a mite on the white bread side. The critical consensus is that the plot is formulaic but the performers (Rebel Wilson has gotten most of the kudos) make watching it worthwhile and it does sometimes embrace the campiness of its proceedings. This seems to be a case of it is what it is and it finishes the month’s Monday Movies on April 25. Movie Review: 'Pitch Perfect 2' is filled with hits and misses

Thanks to the Fathom Events/Turner Classic Movies collaboration we do get one undeniable classic in April but I’ve never been more than lukewarm toward “On the Waterfront” (1954, NR). You probably know the basic story of washed up boxer Terry Malloy (Marlon Brando) who goes up against the mob-run dockworkers union after he meets the sister (Eva Marie Saint) of a man whose murder he has witnessed. He decides to turn informer even though it means implicating his own brother (Rod Steiger), a crooked lawyer working for the mob. It’s easy to see how the anti-union message would appeal to Hollywood at a time when it was fleeing from anything that smacked of liberal sentiment. The inclusion of murder stacks the deck for what is basically an apologia for ratting out colleagues – director Elia Kazan had named so many names to HUAC that Zero Mostel (one of the blacklisted) dubbed him Loose Lips. (Remember that the only “crime” was belonging to a legal political party that was even listed on California ballots.) The film has been acclaimed a classic and there’s no arguing it is very well made, extremely well acted (though Saint’s performance is the only one that impresses me – I have to confess I’ve never gotten Brando), and it boasts a magnificent score by Leonard Bernstein. TCM’s on-air promos call the film Kazan’s masterpiece; I think there are several other more likely candidates in his C.V. for that accolade, starting with “A Streetcar Named Desire.” In the current electoral climate, his warning about demagogues, “A Face in the Crowd,” is especially pertinent. The film screens on Sunday, April 24 and Wednesday, Aril 27 at 2:00 pm and 7:00 pm. While our local Regal Cinema sometimes hosts the Fathom/TCM movies it won’t be showing this one; you’ll have to travel to the Penn Cinema to see it.