As a rule, movies based on video games are always terrible. There isn’t a single one that could be considered a critical darling. “Wreck-it Ralph” doesn’t count; it technically made up its derivative main characters. 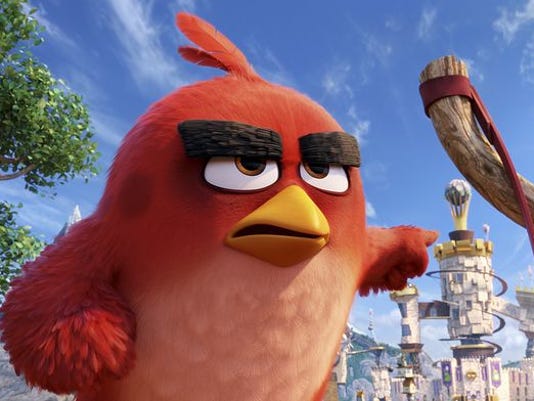 As a rule, movies based on video games are always terrible. There isn’t a single one that could be considered a critical darling. “Wreck-it Ralph” doesn’t count; it technically made up its derivative main characters. “The Angry Birds Movie” tries to buck this trend by being based on game with a non-traditional format (a phone app as opposed to an arcade or console game) and by featuring some impressive animation and decent voice work. It succeeds … in a way.

Red (Jason Sudeikis) is the only angry bird on the otherwise blissful Bird Island. But he’s only angry because everyone is a jerk to him. I’m going to avoid the obvious what-caused-what joke in this movie overloaded with jokes about fowl and what they hatch from. It’s actually a wonder there aren’t more angry birds, since everyone else on the island is so mean and inconsiderate that you’d think they would anger each other. Red freaks out at a birthday party and is forced to attend Anger Management Class. Wait, Red’s reputation has been defined by one trait his whole life, and he’s just now having to attend Anger Management? That’s a stretch even by this movie’s logic. Anger Management is led by the aggressively peaceful Matilda (Maya Rudolph) and consists of the speedy Chuck (Josh Gad), the friendly-but-explosive Bomb (Danny McBride) and the terrifying Terence (Sean Penn). Two-time Oscar winner Penn has only to grunt to make Terence the most interesting character in the movie.

Class is broken up by the arrival to Bird Island of a colony of pigs, led by King Leonard (Bill Hader). The pigs instantly win over most of the native birds, but Red doesn’t like them one bit. By which I mean he’s suspicious. But he also just plain doesn’t like them. Everybody else dismisses him, because he doesn’t like anything. Still, Red wonders what the pigs planning with all those slingshots, trampolines, zip lines and dynamite. He enlists the help of Chuck and Bomb to seek out the mythical Mighty Eagle (Peter Dinklage) for help. Alas, Mighty Eagle turns out to be a total turkey. And Red makes it back to town just in time to see the pigs absconding with everybody’s eggs. The solution to the problem is for everybody to get angry.

The film is ruled by immature humor. Do you or your kids like the idea of birds crashing into things? How about green pigs bouncing around like idiots ? Jiggly dancing at every turn? Every bird, pig and egg joke under the sun? You’ll find it all here, even if you weren’t looking for it. Don’t worry about the humor always playing to the kids, as there are a few jokes thrown in for the adults. Still immature humor, just aimed at mature viewers.

So why did I say that “The Angry Birds Movie” succeeds (…in a way)? Because in all honesty it is the best movie based on a video game ever made. The animation is legitimately top notch, and I can’t deny that I laughed a few times. There were many, many more times where I groaned, but the laughs are there. Terence absolutely steals the movie and a surprisingly high percentage of Bomb’s jokes land. I even laughed heartily at a throwaway line that wasn’t intended for the kids watching this kids’ movie. Plus I kind of want to play the game now. I want to waste time seeing how much damage I can do launching different kinds of birds at different kinds of pigs. It probably would have been a lot more fun than watching this movie. It’s a very relative type of success.

One and a Half Stars out of Five.

“The Angry Birds Movie” is rated PG for rude humor and action. Its running time is 97 minutes.