All About Bey: 'Formation' tour doesn't share a stage for anyone

From 'On the Run' to getting in 'Formation,' Beyonce’s latest tour has us unapologetically ourselves.

All About Bey: 'Formation' tour doesn't share a stage for anyone 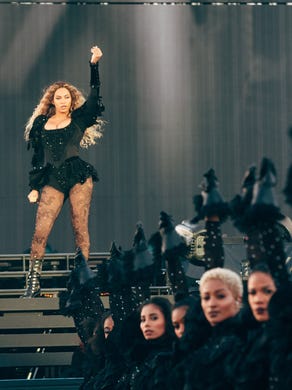 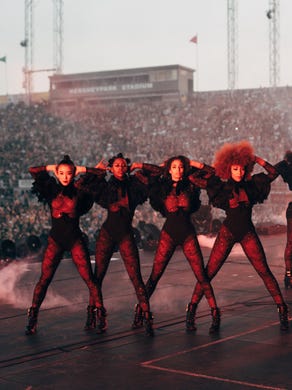 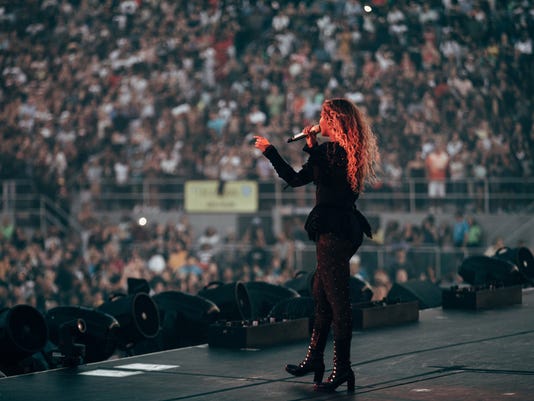 Beyoncé walks languidly down the stage, drinking from her water bottle. She wipes the sweat off her face with a rag and turns to the audience with her signature knowing smile.

The music starts up for her song “Me, Myself and I.”

This statement is a true representation of Beyoncé’s "Formation World Tour." When she released her song "Formation," viewers and listeners saw a new side of the superstar. She used visuals that went beyond typical music video conventions, and instead sent messages challenging us to delve into our social unconscious. Those who questioned her transformation were shook by her Super Bowl performance that wove in Black Panther imagery. The response to the performance was instantaneous, ranging from outrage to solidarity. It was at the Super Bowl that Beyoncé announced her "Formation World Tour."

A change was in the air, and fans knew this tour was going to be different.

The stage is black. Beyoncé appears on the main screen in a white fur coat moving about in a fluid motion. “Why can’t you see me?” her voice repeats from the distance. A feeling of guilt washes over as if she is talking directly to us. We are seeing her now though, in a new kind of glory, unapologetic.

On her last tour, "On The Run," she shared the stage with her husband Jay-Z. Imagery of the two of them as a modern day Bonnie and Clyde graced the main screen. Later in the performance, intimate montages of their family play. Beyoncé is shown off as a dedicated wife and mother. The crowd sighs collectively, and cries tears of joy for their family.

Beyoncé dropped her visual album "Lemonade" in April of this year. Fans were rejuvenated by her new sound and imagery. She promoted black women in all shapes and sizes. The imagery hails from black culture of the old south, intermingled with modern images, the same ones used on her Formation tour. Beyoncé has never shied away from female power in her songs or music videos, but this time it is for black women.

Her dancers move forceful beside her, waving their afros, weaves, bantu knots and even bald heads. The mixed demographic of her audience doesn't seem to feel alienated by this imagery. They understand that Formation is about being unapologetically yourself, and that is who Beyoncé is as a black woman.

Beyoncé commands the entire arena, there is little hint of her fatigue, as she proclaims, “There is no such thing as a weak woman.” The crowd erupts in cheering. 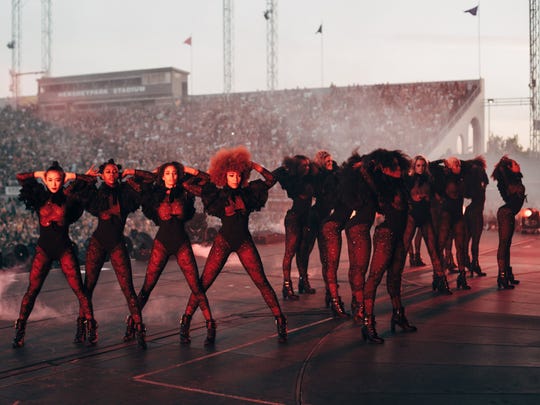 "Formation" is the song she uses to begin her show. Beyoncé and her dancers move powerfully across the stage, bobbing their heads with attitude. They are dressed in black unitards, with wide-brimmed black hats. Next you hear echoes of “I’m so sorry, I’m so sorry,” it trails into her song "Sorry." She belts, “I’m ain’t sorry” repeatedly. This sets the tone for the rest of the show.

Her setlist begins with her strong, feminist-powered anthems such as "Run the World" and "Bow Down." This theme continues, using songs from her "Lemonade" album such as "Don’t Hurt Yourself" and "Hold Up." The crowd goes into a frenzy as she mixes in her old songs and everyone screams the lyrics to "Diva."

The setlist is a part of what makes Formation so different from "On The Run." It’s true she shared performance time with Jay-Z, but many of her songs were odes to love, messages about loyalty to each other and sensual songs about marital intimacy.

This time around it is about Beyoncé. Her shows are elaborate, crowd pleasers in a different way. We can sense that we are getting a raw one-on-one with the artist, the level of intimacy and unabashed honesty that black women are often encouraged to hide.

"Saturday Night Live" did a skit titled “The Day Beyoncé Turned Black” after the controversy over Formation. The parody relays the mass realization that Beyoncé’s newest album music was not created with the same intentions as before, for mass consumption. She does not seek to alienate any of her fans, but it is clear that this time around she has done something for her and young black women alike. Her fans don’t seem to care. They stand with her in her musical transformation.

The crowd for the show represents a mixed demographic, from an older white man in a Phillies hat to young Asian girls to elderly black women. They are all in awe of her a,nd she does not disappoint them. Beyoncé reminds her audience that she still holds her same values of dedication for her family and love for her husband. The crowd goes into hysterics over videos of her and Jay-Z with their daughter Blue Ivy, reminiscent of the "On The Run Tour." She sings "Drunk in Love."

The show is coming to a close. Beyoncé is clad in a gold and white sparkling unitard, flanked by her dancers. They walk down the runway to a pool at the end of the stage. "Freedom" begins to play and they all kick and dance wildly in the water. They stand in a line holding up the Black Panthers fist and then continue to wild applause from the crowd.

The 7 most viral Instagram videos from Beyoncé's Formation world tour

In her final song, she tells the crowd to dedicate it to “whoever you love.” Glimmering in gold, she serenades the crowd with "Halo." A feeling of nostalgia pours over. This tour was for her, but her message of being unapologetically yourself was something we could all share.

The show lets out and people spill out into the parking lot. A short black woman with cropped hair dances sporadically in an unashamed manner. She sings out lyrics from Beyoncé’s song "Freedom." “Freedom freedom, I can’t move, freedom cut me loose!”