Central Pennsylvania will be just one degree from Kevin Bacon this weekend. 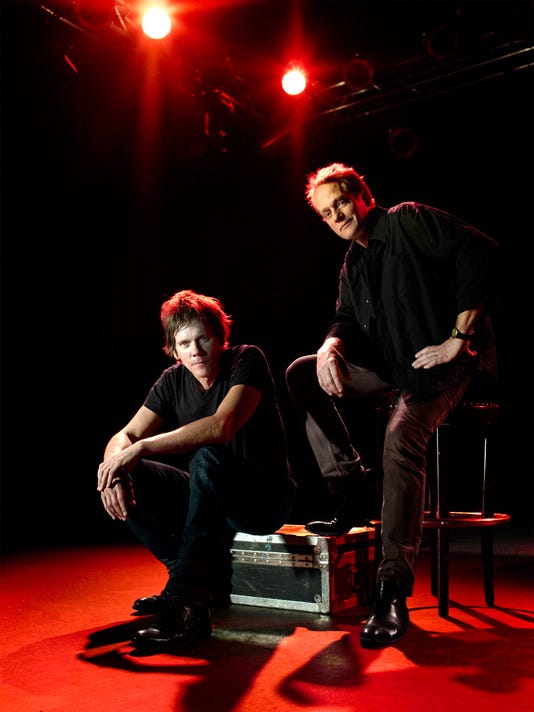 The Bacon Brothers, a gritty rock duo of Kevin and Michael Bacon, are bringing their summer tour to Harrisburg July 30. They'll perform at the Whitaker Center at 8 p.m.(Photo: Courtesy of Timothy White)

Central Pennsylvania will be just one degree from Kevin Bacon this weekend.

The actor, known for his roles in “Footloose,” “A Few Good Men” and “The Following,” is headed to Harrisburg on Saturday — not for an acting role, but for music.

Before Bacon launched his TV and film career in the late 1970s, he was just a kid who loved tagging along on his older brother’s gigs at the Electric Factory in Philadelphia.

But by the mid 1990s — after he’d achieved fame as a Hollywood actor and his brother Michael had found success as a TV and film composer — he was no longer tagging along.

“I just wanted to play, and I had some songs that I wanted to share,” Kevin said. “I’m drawn to things that are challenging, and for me, there’s nothing as challenging as staying on stage and singing a song that I wrote.”

The band, which describes itself as a blend of folk, rock, soul and country, is now touring across the country this summer to promote their newest single, “Driver.” And they’ll be performing it at the Whitaker Center in Harrisburg on Saturday.

Kevin wrote the song as a Secret Santa Christmas gift for his sister, he said.

“I had this old photo of her driving a boat, and I’m sitting there as a little boy,” Kevin said. “I started thinking about that relationship specifically to her. My brothers and sisters are a lot older than me, so they were kind of surrogate parents in a way.”

The song talks about how his sister was always the driver, the one running the show, he said. But it can also apply to a romantic relationship.

“To me, it implies that you need to have a woman to show you the way to take the wheel in your life,” he said. “It’s cute that it’s for my sister, but it’s almost too cute.”

“Driver” is one of several new songs that have been added to the Bacon Brothers' set list this year, Michael said. And it’s not the only one that draws inspiration from family.

“Strong feelings make strong songs,” Kevin said. “What do you feel more strongly about than your family or spouse or lover or child?”

The brothers will also resurrect some old songs they haven’t played in years and maybe play a few covers. But you won’t hear many.

For the Bacon Brothers, their shows are all about their own original songwriting.

“We’re really a songwriting band,” Kevin said. “We kind of live and die on our songwriting. It’s not like we’re going to get out there and shred on our instruments and have people say they’ve never heard anyone play like that. We’re not going to sing like ‘American Idol’ winners ... The show is musical, and there are a lot of good musicians up there, but we’re really trying to get songs across — songs that we wrote.”

What: The Bacon Brothers

Where: Whitaker Center for Science and the Arts, 222 Market St., Harrisburg