On a black leather piano bench in the center of an otherwise empty stage, Robin Spielberg stared intently at moving... 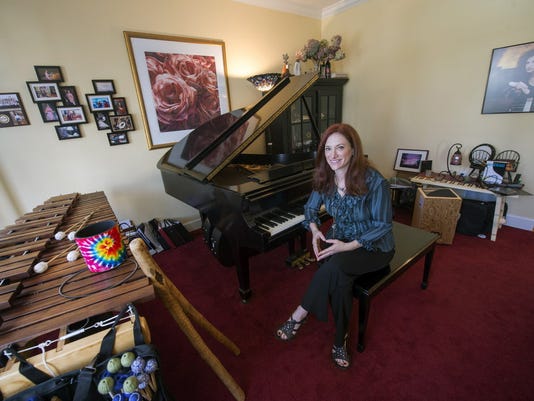 Internationally known pianist Robin Spielberg is shown at her home in New Freedom. She will be releasing her 17th album April 28 and will bring her national tour home to York at the Pullo Center April 18.(Photo: Paul Kuehnel &#45; FlipSidePA)Buy Photo

What: Robin Spielberg in Concert

On a black leather piano bench in the center of an otherwise empty stage, Robin Spielberg stared intently at moving pictures on her computer screen.

She was practicing for her concert at Penn State York's Pullo Center, where she plans to sync one of her new songs to a celestial-themed video.

As her fingers glided up and down the keys that Tuesday afternoon, it appeared she was in a trance. She stared into outer space, and time seemed to stand still.

And that's exactly the way Spielberg wanted it. The theme of her 17th album "Another Time, Another Place," is all about the concept of time and time travel, she said.

"It's a natural human curiosity of what if I went back in time or what if I could go forward in time, and isn't it odd that time goes tick tock in the steady way on a clock, but it never feels that way?" she said. "When time passes, we're constantly surprised by it."

When Spielberg, of New Freedom, finished the piece Tuesday and looked out into the crowd, she saw no one. But on Saturday, the internationally known pianist will see many locals and several familiar faces at the Pullo Center as she brings her national tour home to York.

This will be her first local performance in seven years, she said, and "Another Time, Another Place" is the first solo piano project she's released in the same amount of time.

"I can't believe I let that amount of time go by," she said, recalling the last seven years.

But she kept herself busy with writing a book and audio book, doing book release concerts and book tours and working on an Americana project, in which she rearranges popular songs from the Civil War era to the Gold Rush.

At her concert Saturday, Spielberg said she'll perform both crowd favorites from previous albums as well as new songs.

"Another Time, Another Place," to be released April 28, features 11 tracks, including two waltzes and a song dedicated to her father.

Even though her songs don't have words, each one is inspired by a specific memory from her life, which could be as silly as a cat chasing its tail or as personal as a walk with her mother, Spielberg said. Live concerts are a chance for her to share her memories and ideas with others, she said. And for the first time, her tour will incorporate both audio and visual elements to accomplish that.

The title track "Another Time, Another Place" is one of four songs Spielberg plans to sync to video. In this video, now available on YouTube, Spielberg shares a story about the desire to go back in time.

"What I want to accomplish with those (videos) is giving people a jumping off point with their imaginations," she said. "I want them to daydream. I want them to come here and go on a journey together through music."

Spielberg said she's excited to return to a local stage because a York audience will recognize some of the scenery in the video, which might help them connect to her music on a different level.

"I have to acknowledge that not everyone will hear a piano song and connect, but they might see an image that makes that connection," Spielberg said.

"Another Time, Another Place" was filmed at the York Heritage Rail Trail and Hanover Station.

"As an artist (helping an audience connect with the music) is the most important thing we could possibly do," she said. "It's not performing for anybody. Anything I can do to help make those connections to our very own humanity is the best thing I can do."

What: Robin Spielberg's 17th album "Another Time, Another Place"

Where to get it: Robinspielberg.com or her Pullo Center concert

What to expect at a Kable House show: The mood, the people, the sound

'Dancing with the Stars: Live!' brings tour to Hershey