Lebanon's Big Swing Band has just celebrated 25 years of great "big band" music and is heading for the future with... 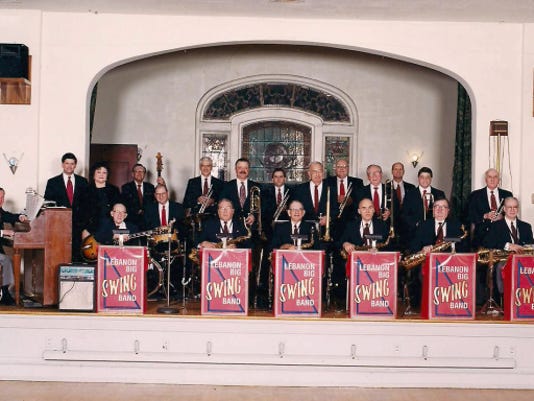 Lebanon's Big Swing Band has just celebrated 25 years of great "big band" music and is heading for the future with plenty of talent and enthusiasm.

It was back in 1990 that a few guys got together and decided the area needed the big band sound, so popular back in the '40s.

It may have been half a century later than the heyday of the big bands, but people still loved the music of Tommy Dorsey, Glenn Miller, Artie Shaw and Harry James, to name a few.

And the continuing popularity of Lebanon's Big Swing Band proves that they still do.

The musical trio responsible for the band's beginnings were Lee Moyer, owner of Marty's Music Store, and the late Cal Wolf and Edgar Felty.

"We needed a fund raiser for the local music union and we thought we might as well do something we like," Moyer recalled. "So we had a dance and we actually made money."

The idea was to raise money for the Local 401-750 branch of the American Federation of Musicians.

Initially named the "Lebanon Big Band," the name was changed to "Lebanon's Big Swing Band" when the craze for "swing" dancing enjoyed a revival a few years ago.

The band's ascendance has been a real success story, Moyer said. What started as a one-time fundraiser has turned into a much-loved and eagerly sought after performance group.

Comprised of 18 performers, many of the initial musicians came from Lebanon High School's "The Swingsters," the local school's big band enthusiasts.

The Swingsters was quite a tradition in itself, Moyer said, and with so many talented musicians already in the area, the band became an instant hit.

At a dinner dance held in the Connoisseur Connection back in the early 90s, all 350 reservations were quickly sold out, and more than 100 reservations had to be turned down, Moyer said.

Rehearsals for the guys began in the Elks Club, and early performances were also in the Elks' ballroom.

"Then we branched out," Moyer said.

"We had more concerts than dances, but those dances were full," Moyer said. "We kept pretty busy; early on, we played at least once a month."

The band plays dance music for the jitterbug, waltz, polkas, the fox trot and more — and the swing band has found that their audience still responds with pleasure.

Any band comprised of more than 10 musicians is considered a "big band," and Lebanon's swing band still maintains a core of 18, plus two singers. Initially, Ray Blouch and Ann Kent were the singers with the band.

"We didn't really have a full-time male singer, though," Moyer said.

That was remedied one day when Moyer was speaking with an acquaintance, Lebanon businessman Bob Phillips. Both men were active in the Center of Lebanon Association, Moyer was vice-president at the time, and Phillips, president.

"I found out that Bob (Phillips) liked to sing, so I asked him 'how about singing with the band?'" Moyer recalled.

The answer was "yes," and that was the beginning of a 21-year association with the swing band, as Phillips has become not only the featured vocalist, but the band's Master of Ceremonies, as well.

"His advice to me, back then, was 'as long as you look at the people and know the words, you'll be fine,'" Phillips said. "It was a great opportunity for me."

Phillips has a special affinity for the music of the 30s, 40s and 50s, he said. Whether it's Bobby Darrin, Frank Sinatra or a standard by Tony Bennett, the ballads of the crooners are quite touching, he said.

"That era was so perfect for music, along with the big swing bands, there were also the composers; they were wonderful poets," Phillips said.

He cites the likes of Cole Porter, Johnny Mercer, the Gershwins, Sammy Kahn, Irving Berlin and Henry Mancini as some of the best.

While Phillips knows a few 100 songs by heart, he would normally sing about two or three per set at a big band performance. Some of the favorites people wanted were "New York, New York," "I've Got You Under My Skin" and "Over The Rainbow," he said.

"In the heyday of the big bands, it was a tough life because they were on the road every night," Phillips said. "But for us, and the folks we work with, it's been great. It's wonderful how supportive the band members are to each other; it really is a team effort."

While the band had a good take in those early days when they played monthly, it was never about the money, Moyer said.

"It's not really for the money that we do this, it's for the pleasure," Moyer said. "There's something about music that makes you happy."

Moyer began playing the trumpet as a child and also plays keyboards. He is the pianist for the swing band.

"I just play music every day," Moyer said. "I'm a music person, and I love this kind of music."

The band now rehearses in Lebanon's Senior Center on Maple Street. Even though the membership has changed nearly "100 percent," Moyer said, the musicians are all top performers.

"When you play in a section, (like trumpets) it's like horses pulling a wagon; you have to be a good musician, and have discipline," Moyer said. "You have to stay together. And the band is in good hands, we have some younger guys coming up and they'll keep it going."

The new soloist will be recent Penn State graduate and communication major Brandon Kisner will be taking over for Phillips.

Phillips will still be on stand-by if needed, but for now, said, "It's been a great run."

"I've enjoyed every minute of it and I certainly wish the band every success," Phillips added.

"Being a member of a swing band is like being "part of history that's still alive," Moyer said. "If there's one reason why swing music is still so popular, it's this: It's good music.

"We are of the swing era; it's a different type of music," Moyer continued. "It has melody, it has words, and the words make sense - they're either love songs or happy songs or a song from Broadway. It's a universal type of song; everybody knows and everybody likes to sing along. It's a happy kind of music and people enjoy listening and dancing to it and it's American music."