A Lancaster County theater is banking that a lost art form — the magic-lantern show — can be resurrected... 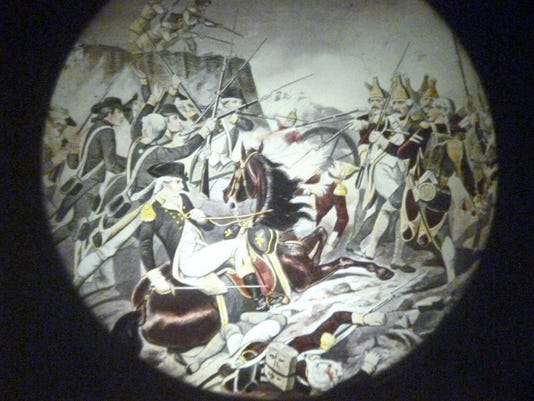 How the battle of Concord and Lexington during the Revolutionary War appears on a big screen when projected by the magic lantern.(Photo: Photo by Bill Warner)

A Lancaster County theater is banking that a lost art form — the magic-lantern show — can be resurrected and become a major attraction for tourists and locals this summer.

The Plain & Fancy Theater — part of the Amish Experience complex in Bird-in-Hand — will debut a patriotic magic-lantern show on Friday, June 26, titled "This Is My Country!" The show will run Tuesdays through Saturdays at 7 p.m. through September 6.

The show is both unique and historic. Officials say it will become the only permanent magic-lantern show anywhere in the world in more than 100 years.

Magic-lantern shows were all the rage from the early 1800s through the Victorian Era at the turn of the century. Ironically, the magic lantern was done in by the very thing its technology paved the way for: motion pictures.

The magic lanterns of the 19th century were operated by colorful showmen who narrated a story while moving slides through the projector. Plain & Fancy Theater hired an experienced showman to operate its modern lantern: Mark Sullivan of Lebanon, who penned the script for "This Is My Country!" Sullivan is a former actor and artistic director of the Pennsylvania Renaissance Faire at Mount Hope.

"People shouldn't come expecting a movie," Sullivan said during final rehearsals for Friday's opening night. "They should come expecting to see an entertainment that was the most important entertainment in the world in the 1800s. It's a unique experience. It's a storytelling-music-image thing that you've never seen before. We're trying to bring back an old art form.

"I got hooked," Sullivan, the theater's artistic director, said of the magic lantern. "I never knew what it was until I got a phone call from here."

Essentially, the magic lantern is a wooden and brass projector with three lenses; it's also known as a triunial lantern. Images are painted on 3-inch glass slides and, when inserted in the lantern, are magnified on a large screen. The three lenses enable multiple images to be superimposed, which was sheer magic for 19th-century audiences.

The triunial lantern in the Plain & Fancy Theater is one of only seven of its kind in the world. It's valued at $40,000.

"This Is My Country!" is slightly over an hour long and includes a preshow where Sullivan warms up the audience and explains how the magic lantern works. Sullivan, dressed in a Victorian-era tuxedo, plays Professor Phineas T. Firefly, and he takes the audience on a 300-year journey through American history, from the Pilgrims to the Wright Brothers.

"I've got 90-some slides here and I hit the music cues and I read off a script, and I'm moving slides through," Sullivan said.

Most of the slides were donated by the world's foremost expert on magic lanterns, the American Magic-Lantern Theater in Connecticut, owned by Terry Borton. Borton also offered his expertise on running the projector.

Sullivan wrote the script over a roughly two-month period. He also played percussion and did sound effects for the soundtrack. He got significant contributions from Lancaster County illustrator Mike Abel, and musicians Tom and Laurie Reese, who created the show's soundtrack.

"I wrote it completely. It's my baby," Sullivan said. "I'm using a lot of (Borton's) images because, obviously, magic-lantern images are not lying around. Mike Abel drew about 17 or 18 images for us. And the soundtrack, Tom and Laurie Reese and I played on it, with a couple other musicians. I think it's really cool. It's all period music. We have a piano player doing a Scott Joplin rag at one point."

The audience will get a feel for 19th-century special effects, with 21st-century touches.

"Mike Abel did the drawing for me of the Wright brothers' first flight at Kitty Hawk. And then I got an archive picture of the exact same thing," Sullivan said. "I have Mike's image of the drawing and I literally will cross-fade between that and the real picture, and it goes from being an obvious drawing to the real picture, so it's really cool.

"I have what is called a slip-slide where I can make a cannon fire and Uncle Sam skip rope. There are Victorian special effect to this."

Another special effect, Sullivan explained, is adding red dye to a slide that contains water, symbolizing the bloodshed at the Battle of Gettysburg, for example.

Since modern audiences haven't seen a magic-lantern show, it's impossible to guage how the show will be received. But Sullivan hopes audiences will be entertained and inspired.

"It's a quaint, old-fashioned, sweet way to look at American history, with some fun stuff and some goofy stuff and some serious stuff," Sullivan said. "And it's a unique form of entertainment. I would love for (audiences) to walk out of here, going 'Well, that just made me feel good about my country.'

"I described this to somebody the other day as 'it's a rock being thrown across a flat pond. We're just skipping over history. Nothing goes too deep.' Do we tug on the heartstrings a little bit? Absolutely. Do we explain why the Civil War came about and every little nuance about it? No. It's not meant to be that. It's meant to be entertainment."