A father and son duo from Red Lion will appear on "Steve Harvey" on Tuesday after a selfie went viral.

A father and son duo from Red Lion will appear on "Steve Harvey" on Tuesday after a selfie went viral.

Billy and Correll Stanfield's photo was posted on Twitter @_King_Rell_ and got 2 million views and thousands of comments, according to a news release. 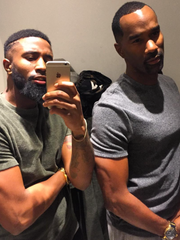 This selfie from Billy and Correll Stanfield of Red Lion went viral and landed them on 'Steve Harvey.' (Photo: Submitted)

From the news release from Harvey's show:

"What the photo doesn’t show, is Billy’s story. Billy admits he wasn’t always the best father. He went down the wrong road, became a big time drug dealer and even spent five years in jail. He’s completely turned his life around, is married, became a pastor, runs a mentoring program in Baltimore and says that he’s being a “real father” to his kids and teaching his son the proper way to treat a woman.

Tune-in to “Steve Harvey” on Tuesday, November 17 as Steve and Billy join forces to set 20 year old Correll up on a date, helping him choose between two women that Steve hand-picked for him."

The show airs at 3 p.m. on NBC. In the York area, viewers can tune to WGAL-TV Channel 8. Or check your local listings or go to www.steveharveytv.com/ for times and channels in other markets.