Following the lead of children’s author Theodor Geisel — Dr. Seuss — the musical based on a compilation of his books, “Seussical,” endeavors to become a feel-good event with a well-meaning message or two tucked in. 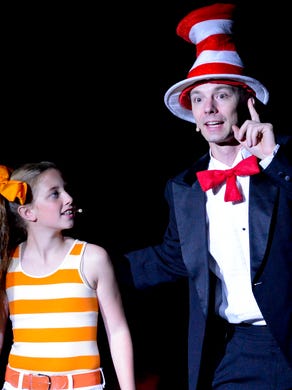 Eric Pope (Cat in the Hat) and the members of Whoville perform as the Lebanon Community Theatre held their final dress rehearsal for Seussical on Tuesday, November 3, 2015 2015. The show will run November 5-8 and 12-15. Jeremy Long, Lebanon Daily News
Fullscreen 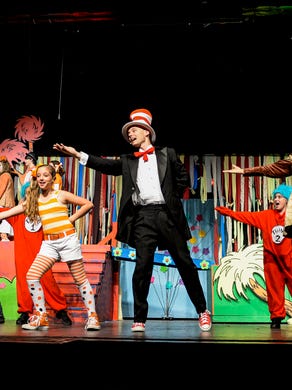 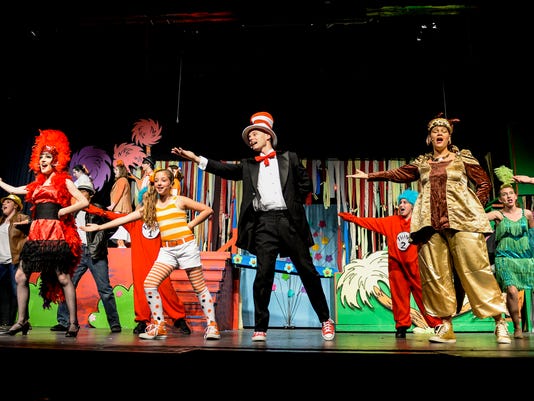 Following the lead of children’s author Theodor Geisel — Dr. Seuss — the musical based on a compilation of his books, “Seussical,” endeavors to become a feel-good event with a well-meaning message or two tucked in.

Geisel’s books resounded with parents and children alike — and still do — because he had a knack for combining mores with clever poems and wacky pictures, making child-sized morality more fun than was thought possible.

Dr. Seuss can be considered a modern day “Aesop,” with his child-oriented fables laden with truths, encouragements and acceptance.

It’s fun for little kids to read Seuss — or be read to — and it’s fun to watch a singing, dancing musical based on those books.

The musical “Seussical” presented this month by the Lebanon Community Theatre may not have a cast of thousands, but it sure includes a lot of people — singers, dancers, musicians and many, many children make up the cast.

That’s OK with directors Kevin L. Biddle and Robin Stutzman, who enjoy the energy the youngsters bring to the show.

About 25 kids, ages 12 and under, are in the musical, and while it may have required extra work to keep everybody on point, (6-year-old attention spans!), the results are worth any extra effort, Biddle said.

One benefit of having very young children perform is that they may develop an appreciation for the theatre, Biddle said.

“Having them in the musical is a good way to introduce the theater to kids,” Biddle said.

“The story is a lot about imagination,” Stutzman said. “It’s about how thinking about things helps us cope with life, by imagining how things can be.”

With more adults and teens in the cast, 15 people in the pit orchestra, and about a dozen people working behind the scenes, the production did take a lot of folks to get it up and rolling.

Like any good production, the work is not seen.

The lightheartedness of the production is so all encompassing, it makes you not think about any actual labor that went into making the musical.

That’s because the playwrights kept the playfulness of the books, and the innocent, childish outlook in the musical production.

“Whimsical fun” is the best phrase to describe the musical, Stutzman said.

Because “Seussical” contains several characters and story lines from the books, it’s familiarity almost ensures it will be a hit with families.

“It takes all the stories written by Dr. Seuss and rolls them into a musical,” Biddle said. “It has a loose plot, focusing on Horton the Elephant, who ends up trying to protect the little ‘Whos.’”

To encapsulate, the play is about one elephant trying to save a small world.

But the plot isn’t the main reason people will come to see the show. It’s the melange of catchy tunes, clever lyrics and likable characters that can almost stand alone without a plot that will keep people enjoying the production. Songs push the plot along, but that’s almost secondary to the general feeling of “Hey, let’s put on a show.”

“It’s just a feel-good musical, with two hours of light-hearted fun,” Biddle said. “The cast has done an amazing job.”

The musical opens with “JoJo,” a little girl, finding a tall, red and white striped hat.

The hat, of course, belongs to the Cat in the Hat, played with suave mischievousness by Myerstown resident Eric Pope.

The Cat in the Hat leads JoJo into some misadventures, and guides her through the play, as well. Pope embodies the physicality and one would imagine, the voice of the character. Pope holds a Theatre Arts Degree from PSU.

All the actors seem to have been custom-made for their parts, and that’s a good thing.

Alisia Alvarez, a seventh grader at Elizabethtown Area Middle School, is making her musical debut as JoJo, and does a fantastic job. It turns out JoJo is one of the tiny Whos, that gets in trouble for thinking “big thinks.”

The message that JoJo personifies is that it’s not only OK to think outside the box, it’s preferred.

Horton the Elephant is the hero of the piece. He’s the one who finally hears the miniscule Whos on their tiny planet, calling for help.

Kevin Gane, a senior music education major, has chosen the right career path; he also does an excellent job as Horton. It must not be easy to portray an elephant while wearing a cap with flaps.

Of course the elephant helps the tiny Whos, even though others around him don’t hear the Whos and make fun of Horton for talking to, what they perceive, is just a speck of dust.

The Whos are really that tiny.

Gertrude, a bird with only one tail feather, has a crush on Horton, and that adds more interest to the action.

As Gertrude, Bethany Stutzman has an excellent voice and does a great job of being believable.

Marcus Sprecher, an Annville-Cleona grad, is the musical director and pit conductor.

One lesson that repeats throughout the play is that Horton is determined to help the little Whos, and  steadfastly repeats, “A person’s a person, no matter how small.”

While that sentiment is surely directed at children, the musical itself has a lot to offer adults, too.

Kids might not notice the Whos’ lament about “tall trees that have been cut down,” or the concern that “war is near,” but adults will.

And that’s why we need all those big thinkers — like Theodor Geisel.