Family time is taking on a whole new meaning at Lebanon Community Theatre, where the cast and crew is preparing for the latest production, "The Water Engine," which opens Thursday, March 3.

Working on their lines during a recent rehearsal for ‘The Water Engine’ are, from left, Jake Butler, Angelia Bixler, Ed Tadajweski and Grace Tadajweski.(Photo: Submitted photo)

Family time is taking on a whole new meaning at Lebanon Community Theatre, where the cast and crew is preparing for the latest production, "The Water Engine," which opens Thursday, March 3.

The members of two Lebanon County families have decided to chase the acting bug and perform together on stage for the first time.

Ed Tadajweski and his 10-year-old daughter, Grace, of Lebanon, landed roles in the 15-member cast, as did the Jonestown family of John Butler, Yvonne Rulli-Butler and their adult son, Jake Butler.

All are essentially novices in the acting world; in fact, the children have a leg up on their parents when it comes to experience.

Ed Tadajweski said he was looking for something fun and rewarding that he could share with his daughter.

"This is one of Grace's big interests: the theater," he said, "so I'm stepping out of my comfort zone to do this."

This is Grace Tadajweski's second appearance in local theater; she played one of the Bailey children in "It's a Wonderful Life" at Hershey Area Playhouse. Grace has also performed in a couple of productions at Cornwall Elementary School and aspires to be in plays and musicals in high school and beyond.

Meanwhile, dad's theater experience is limited to a "voice" role in last year's "The Sunshine Boys." Ed Tadajweski sat on LCT's darkened balcony and read from a script; he was heard but not seen.

"I like to joke that this is my second show, but my first time on stage," Tadajweski said.

Likewise, Jake Butler has all of the stage experience in his family.

"I had done some musicals at Northern Lebanon (Junior-Senior High School) and one at Lebanon Valley College," Butler said.

His eighth-grade director at Northern Lebanon? None other than Larry Sheaf, the veteran actor/director who's at the helm of "The Water Engine" for LCT.

While live theater is a big leap for Ed Tadajweski, John Butler and Yvonne Rulli-Butler, all jumped in with little trepidation.

"Actually, I'm a therapist for (Lebanon County) Youth Advocate, and I was looking for a program for one of my clients," Rulli-Butler said. "My client backed out, and I said to my husband and son, 'why don't we do it? It's radio (the play portrays a 1930s radio show). It'll be fun.'"

"I immediately jumped in," said John Butler. "It's local theater. We haven't been to many shows here. It's a chance to support the theatre."

Tadajweski, a cardiologist at a busy medical practice, said he has no designs to moonlight as an actor. "The Water Engine" is simply a fun exercise designed to make lasting memories for a father and daughter.

"It's definitely different for me, and it breaks the monotony of what I do," Tadajweski said, before joking, "It's gonna either make my career on Broadway or I'm going to retire."

Grace said she's feeling a mix of emotions working on stage with her dad.

The Butlers, meanwhile, have public-speaking experience in their backgrounds, and that's a big help, they said.

"I've done a lot of public speaking, so we're used to being in front of people," Rulli-Butler said.

But it's different being on a theatre stage, acknowledged John, who called the experience "a challenge."

"It was something to do together," said Rulli-Butler, who indicated that she wants to stay involved with LCT as a volunteer when this gig ends. "They say that's one of the tricks to life: Don't stagnate. Try different things. Just to do something in the community, to do it together, away from the TV. It's all good stuff."

THE REST OF THE CAST

Sheaf is directing the show, and Wiley Parker is the assistant director.

"The Water Engine" was written by David Mamet and had a short run on Broadway in 1978. The story also was made into a TV movie in 1992.

What Lebanon Community Theatre audiences will see is a play within a play. The actors are the performers, the announcer and the sound-effects man in a 1930s radio show. The LCT audience doubles as the audience for the live radio show, complete with "applause" signs and other cues.

The story focuses on a young inventor who's found a way to run an engine on distilled water, instead of fuel. At first ridiculed, he is courted by crooked lawyers attempting to buy the invention from him on behalf of "certain business interests."

He balks at their low offer and, well, to reveal much else would be a major spoiler alert. Just go see the show. 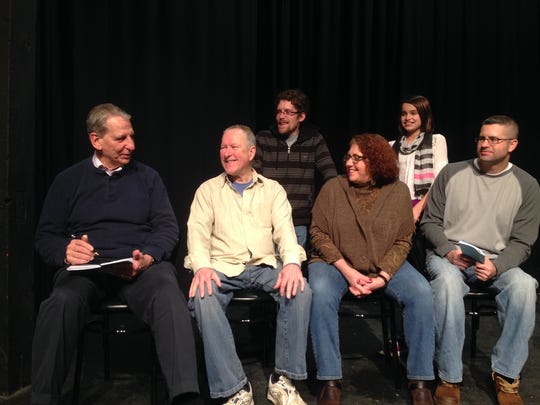