“We put the mock in democracy!” emphatically boasts the website of the satirical group Capitol Steps. If you’ve seen their skits before, you’re sure to agree. The group is a veteran act at Gretna Music.

The Capitol Steps will take on political figures both national and international, from all across the political spectrum when they take the Gretna Music stage on Tuesday, Apr. 19.(Photo: Courtesy Michael M. Reyna)

“We put the mock in democracy!” emphatically boasts the website of the satirical group Capitol Steps. If you’ve seen their skits before, you’re sure to agree.

The group is a veteran act at Gretna Music.The Capitol Steps, one of the foremost purveyors of live political satire skits and songs, will bring their talent to translate headlines into laughs to Gretna Music on Tuesday, April 19 at 7:30 p.m. at Elizabethtown College’s Leffler Chapel, only a week before the PA primary election.

The group will be performing 30 different songs and skits, with five performers taking on the whole slew of national and international political figures to be lambasted.

The group started in 1981, when its founding members were working as staffers for Republican senator Charles Percy.

“We were trying to figure out what to do for the Christmas party,” said Newport.

They decided on a comedic satire act - one which would either be a hit or get them fired.

The act worked, and in the following years, they began performing throughout Washington, D.C. and beyond. In 1988, they were invited by Ronald Reagan to perform at the White House.

“We said, ‘Well no one’s stopping us, so we might as well keep going,’” said Newport.

One of the largest differences from when they started, explained Newport, is the way news, their primary source of material, is received.

“The news cycle is much faster today,” she said.

Because news has become instantaneous, the Capitol Steps have to constantly react to breaking news, sometimes even working it into their show in the same night.

This has proven to be difficult with the largest source of material this year, Donald Trump, who is providing them with material almost faster than they can process it.

“The next day he says something more outrageous, so it’s hard to keep up with him,” she said.

Of course, the Democrat side of things is no safer from the group’s biting wit.

“I personally find Bernie Sanders quite hilarious. He’s like the old man who’s asking why his VCR is always blinking 12:00. And then of course Hillary Clinton is good material because she brings back Bill,” said Newtown.

Newport also cited Jeb Bush as a favorite, as he brought George W. Bush back into the routine, a personality who, it goes without saying, is comedic gold.

One of the best presidential terms for material of the group’s years, she explained, was the Clinton scandal, though sometimes it was hard to outdo reality.

“It was a real challenge to be funnier than the headlines,” Newport said.

Throughout the years of satire, the Capitol Steps have chosen not to choose political sides, instead choosing to make fun of everybody and anybody.

“We agreed to get everybody because we’d have twice the jokes. And at the time, we were trying not to get fired,” said Newport.

The group also has universal appeal due to their decision to take on both parties.

“I think that because we’re getting everybody, we can go anywhere,” said Newport.

Ultimately, the group’s shows provide a way to relieve the tension of the political landscape, which can become overly serious and stress-inducing.

“The Capitol Steps allow us to take a step back and make sure we’re not taking ourselves too seriously,” said Kane.

Newport summed up her group’s performances in a similar way.

“If you’re frustrated with politics, this is a great way to let it out, rather than throwing a shoe at your TV,” she joked.

For more information on Gretna Music and for tickets, visit gretnamusic.org. 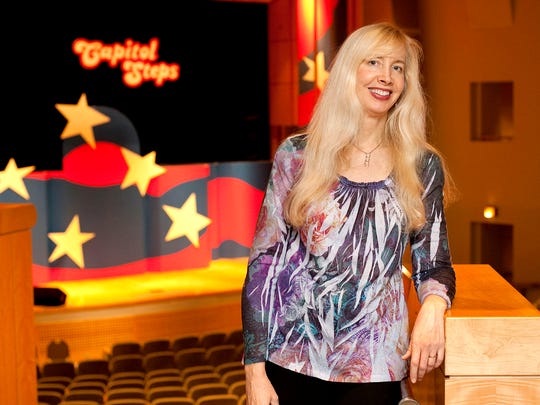