Central York students who will work behind the scenes on Encore talk about what goes into a theater production. 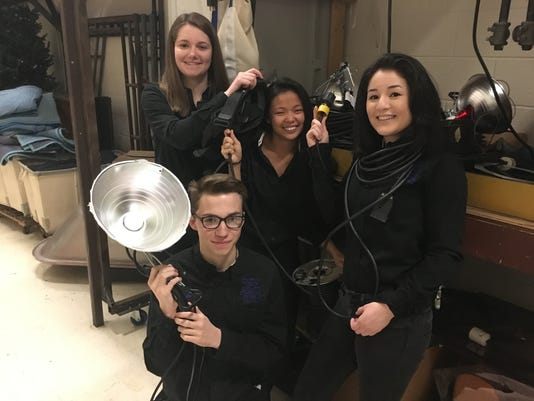 Central York High School students, from left, Abby Swenor, Robert Copper Smith, Naomi Frey and Sydney Little, work as theater technicians, handling lights, sound and all other behind-the-scenes aspects of their high school theater productions. Although they're not in the spotlight on stage, they agree their work is essential to successful performances.(Photo: Submitted)

Most people who see a theater production focus on what unfolds in front of them, the sights and sounds on stage.

She and some of her Central York High School classmates suggest theater-goers consider what happens backstage, ponder everything you can’t see that brings the stage to life. That behind-the-scenes realm is where Swenor, 16, a sophomore at Central, and her cohorts do their work as theater technicians, or techies as they call themselves.

“We’re like the magic of theater,” Swenor said. “The actors on stage, they’re the face of the show. But we create everything around them to make the show possible.” Techies handle everything from props to sound to lighting.

Their role during Encore, the annual showcase of York County high school theater programs on April 24, is not as involved as it is during the school’s theater productions throughout the year. That’s mainly because Encore is really a scaled down snapshot of each high school’s performances wrapped into one night of entertainment, and no elaborate props are used. For that reason, only Central students work on tech for the finale production.

Still, Encore is a challenge taken seriously by all involved.

That attention to detail and dedication to precision is what techies strive for, they say, even if the audience can’t see them.

“Tech is very exact,” Swenor said. It has to be since so many elements of a production rely on one another. For example, set pieces need to placed precisely because they signal to the actors where they need to be, which affects where spotlights need to be, etc. “I like the exactness of it,” Swenor said. “I feel I do well under pressure. It motivates me to have it exactly the way it needs to be.”

Sydney Little, 17, a junior at Central, said that goal of precision makes tech “so much more work than you would think."

Little, who joined tech as a freshman, said that the pressure of tech helps her to manage her anxiety.

“You cannot hover and hang on to that feeling” when something doesn’t go as planned, she said. You need to let go, move on, and think on your feet so the show can continue.

Robert Coppersmith, 15, a sophomore at Central, said his foray into theater came years ago when his older sister was involved in high school theater productions and he helped his mom with costuming. A few years ago, when he was a munchkin in a production of “The Wizard of Oz,” Coppersmith helped someone working on the lighting when he realized he’d like to try that aspect of theater.

“I just enjoy that you may be a shy person, and you can show people that even if you’re shy, you can put your two cents in there without being pushed aside,” Coppersmith said.

He said it’s challenging and rewarding making sure things happen seamlessly backstage, juggling the variety of tasks that need to be done to bring a production together.

Coppersmith, Swenor and Little said they haven’t worked on any productions to date where everything has gone smoothly backstage.

“There’s always something you can improve on,” Coppersmith said. “Somethings may be small - a tweak here, a tweak there… You always have to look to the future, not to the past.”

So, Little said, if you come out to watch Encore to attend a theater performance in the future, think about everything that came together to make the production happen, both the things you can see as well as the things you can’t.

“Think about how big of a thing this (production) is, and how many people are involved in it,” Little said. “And think how there’s so much more that goes on than what’s on stage.”

Spring Grove's Evan Brooks delivers a menacing performance as Willy Wonka on a candy boat with parents and children on their way through his chocolate factory tour during the Encore high school musical theater showcase at Central York High School on Sunday, April 27, 2014. Jeff Lautenberger, For The Daily Record/Sunday News
Fullscreen

Northeastern's Emily Gibbs, as Maria in "The Sound of Music," sings to the von Trapp children on stage during the Encore high school musical showcase at Central York High School on Sunday, April 27, 2014. Jeff Lautenberger, For The Daily Record/Sunday News
Fullscreen

Dancing utensils shoot a stream of confetti during the song "Be Our Guest" from Kennard-Dale's performance of "Beauty and the Beast" during the Encore high school musical showcase at Central York High School on Sunday, April 27, 2014. Jeff Lautenberger, For The Daily Record/Sunday News
Fullscreen

Emcee Matt Belanger dons a pair of shades while introducing West York's production of "Footloose" during the Encore high school musical showcase at Central York High School on Sunday, April 27, 2014. Belanger is a Central York graduate currently working as an anchor for the ABC affiliate station in Pittsburgh. Jeff Lautenberger, For The Daily Record/Sunday News
Fullscreen

Cast members from Central York's production of "Spamalot" tune into a live broadcast of the Encore high school musical showcase backstage after their performance at Central York High School on Sunday, April 27, 2014. Jeff Lautenberger, For The Daily Record/Sunday News
Fullscreen

York Catholic's Chris Taylor, as Lumiere from "Beauty and the Beast," gets a microphone attached backstage during the Encore high school musical showcase at Central York High School on Sunday, April 27, 2014. Jeff Lautenberger, For The Daily Record/Sunday News
Fullscreen

A small cast from South Western High School performs a scene from "A Funny Thing Happened on the Way to the Forum" during the Encore high school musical showcase at Central York High School on Sunday, April 27, 2014. Jeff Lautenberger, For The Daily Record/Sunday News
Fullscreen

Dallastown students in costume for their performance of "Into the Woods" sit in the audience during the Encore high school musical showcase at Central York High School on Sunday, April 27, 2014. Jeff Lautenberger, For The Daily Record/Sunday News
Fullscreen

Before York County high school theater programs take the stage for Encore on April 24, leaders of those programs were invited to give a shout out to those who've made their productions possible. Here's what several of them had to say.

"We directors were so impressed with the professional performances that our students delivered for 'Mary Poppins.' Many audience members told us that the singing was outstanding, the production numbers electrifying, and the special effects thrilling. We all feel very proud and happy to have worked so hard to give the community and our students such a memorable show."

"I am so proud of the outstanding and professional work that our students, parents, and staff did on this year's show, Mary Poppins.  Through all of their hard work, we had a fantastic show that brought in our best attendance yet. In addition, this was the first year that all of our shows had a consistent energy from beginning to end, and we didn't have one night better than another night."

"Congratulations to the cast, crew, and pit on an awesome production of Bye Bye Birdie at York Catholic. Thank you to the production team for making the show possible. A special shout out to our seniors, we will miss you next year!

"I’ve never had a cast work as hard as the cast for MARY POPPINS did. The show was very emotional for me since after 27 years of directing at Dover, it was my last one. These kids made it very special and I’m anxious for the community to see a snippet of our show."

“We’re very proud of the hard work and collaborative efforts all of our students put forth and the success they had with the THE LITTLE MERMAID."

"West York's musical theater program has been growing each year since its onset . This year over 100 students were involved in some capacity with the musical.  We hope to carry on the tradition for many years to come."

"Congratulations to the Cast, Crew, Pit and Staff of Susquehannock High School's 2015-2016 productions of The Crucible and Pippin! Everyone handled the big issues in these plays with maturity beyond their years, and made this theatre season one of the most thrilling I've witnessed. Special thanks to those seniors that have led the way the past four years!"

Ticket information: Tickets are sold out.